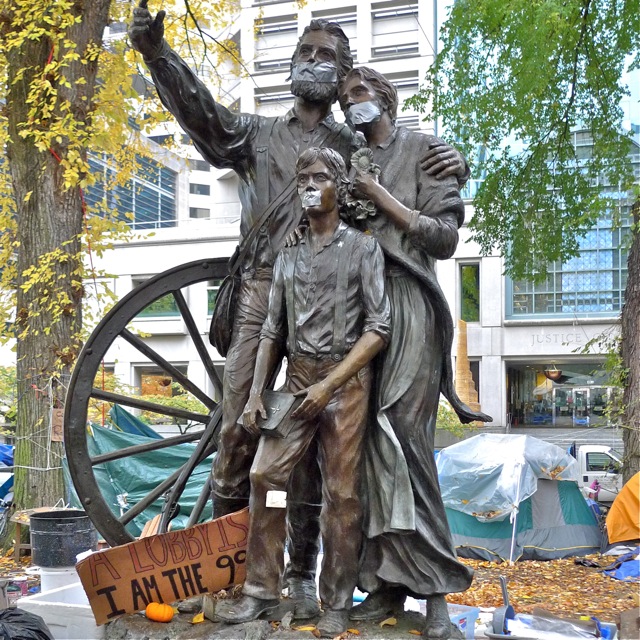 Steve Novick is an odd fellow. He seems to fashion himself a rebel, a brave upstart pushing bold new ideas. But I’ve been noticing some weird things about Novick, a pattern that I’m finding it hard to ignore. That pattern is simply this: on the big issues – on the structural things we can actually do to improve politics, Novick is generally wrong. And the more I learn about him, the more he seems to fit the classic mold of  the centrist Democrat, the quintessential politician who puts on a good face, but with a little inspection, turns out rotten.

A few weeks ago, Common Cause Oregon published a fun report about the money involved in the city council seat Novick is running for. Turns out Novick has two genuine grassroots opponents who have both raised well under $10,000. Novick himself has raised over $260,000. Insecure much?

You may not have heard of his opponents Jeri Williams and Mark White. That’s because both are genuine grassroots activists (both got endorsed by the Portland Green Party) and they aren’t able to pay to reach you. But you can reach them and both are worth the investment.

Jeri is a survivor of human trafficking, an environmental advocate, and a community activist who fights for the rights of the homeless and for the rights of women. She currently works for the city as a program coordinator for the Diversity and Civic Leadership programs. As of April she raised $5,831.

Mark White is an advocate for environmentally sustainable development policies, community budgets, and direct democracy. Up until last February, he was the co-chair of the city’s Charter Review Commission, which had, among other things, given activists their first chance to strike back against Citizens United. In February the commisssion sent recommendations to city council to stop police brutality. Then, very suddenly, Mayor Sam Adams decided to shut down the committee – illegally. Mark is still fighting to bring back the Commission, and has demonstrated his commitment for genuine democracy. As of April, he raised $3,293.

Mark and Jeri could have qualified for public financing through Voter Owned Elections if it hadn’t narrowly lost in the 2010 election by 500 votes. That would have made them competitive against the moneyed opponent, Novick. Instead we are faced with the very real possibility of an easy victory for Novick, with very little competition or interplay among the candidates – this would occur if Novick gets 50% of the vote this Tuesday. Campaign finance reform, combined with public financing, could have prevented this kind of non-competition.

And this is where things get ugly for Steve Novick. He played a strong role in eliminating Oregon’s political tax credit, which returns 100% of a person’s political donation (up to a limit) via their income tax liability, and therefore encourages small donors and grassroots organizing – including the kind of campaigns being run by Mark White and Jeri Williams. Novick called it a waste of money.

Back in 2006, activists in Oregon initiated a massive effort to get the money out of politics. If this succeeded, then in terms of campaign finance rules, Oregon would have gone from being the worst state in the nation – with literally no limits on contributions of any kind – to the best in the nation. Novick opposed the effort vigorously, and even wrote a hit-piece against it and its chief backer, long-time activist and veteran public interest attorney Dan Meek. (the measure did end up passing, but state Democrats refuse to enforce it, so the battle is now being fought in the Supreme Court. Many candidates, including Amanda Fritz, have expressed their support by voluntarily abiding by the law. When asked by the Working Families Party if he would do the same, Novick replied “I am puzzled by your question about limits approved for state elections – there are no limits in state elections; what do you mean?”)

The article itself is mostly incoherent. But some points stand out and deserve special attention – especially in light of Novick’s latest shenanigans.

The first is a bizarre rhetorical move that claims Dan Meek is corrupt for not being corrupt. In his own words: “Nobody should underestimate the self-righteous feeling of incorruptibility (and desire for recognition of same) as a source of corruption in its own right…. I suspect that Dan, like me, is often tempted by the poisonous fruit of self-righteousness.” Strong words.

He goes on to make the kind of outstanding assertion that would strike even the most non-political person as completely insane, especially in a post-Citizens United era.  Again, in his own words: “I can give you a pretty good argument that there ISN’T very much money in politics.”

There isn’t very much money in politics. In other words – not enough money – despite every available poll showing strong majorities of Americans who want all the money out, including this one by People For The American Way, which says that 85% of voters think corporations have too much influence in our political system, and that 95 % think that corporations “spend money on politics mainly to buy influence in government and elect people who are favorable to their financial interests,”

So Novick wants more money in politics, and less money spent on wasteful things. How can he balance this equation?

Let’s take a quick look at some of Novick’s top donors:

Notice anything? They are all members of the Lower Willamette Group – the same group of companies that turned our river into a Superfund site. Why do they like Novick so much? Because Novick opposes dredging contaminated sediments from the site, which is by far the most thorough and most expensive way to clean it up, and also the very same policy he supported for the Willamette harbor 20 years ago as an attorney for the Justice Department when he forced the Port of Portland to dredge up contaminated coal tar sediment they had repeatedly spilled. Now Novick is saying that costs too much money, and there are other important uses for that money – starting, I presume, with the startling shortage of it in politics.

Now that the companies are being forced to clean up their mess, they want a city council who is friendly to a cheap, “cost-effective” clean-up. Of course, Novick is their man. He’s a man who understands that a lack of corruption is, truly, a sort of inverse moral corruption, almost like “reverse racism”. And if a lack of material corruption is actually an insidious type of moral corruption, doesn’t this mean that if your corruption lacks hubris, you have a sort of… virtue?

Novick’s claim that there isn’t enough money in politics is hard to read as anything but a naked embrace of bribery. I don’t know about you, but I’m not particularly worried about Steve Novick being infected with righteousness. I’m a little more worried about his idea of objectivity after it gets filtered through his donors. Choosing the best scientific option to clean up our river is not a choice I want the big corporate polluters to have veto power over. A live-able ecosystem is not something we can bargain away. It’s not even something we can measure. It’s a fundamental human right – and it’s being violated, with anyone who’s ever eaten fish out of the harbor (mostly people of color) at risk of serious illness. Novick himself has actually approached the Coalition of Communities of Color, telling them that that they should ask the EPA for a less extensive clean-up in exchange for health clinics and a public health fund. According to Jeri Williams, they are essentially “trying to buy off” the ethnic groups. Watch it Jeri – you’re starting to sound like Dan Meek.

As a prosecutor for the Department of Justice, Novick actually helped to handle the infamous Love Canal case. This is sometimes cited as an example of big crime leading to big justice. But that’s not the lesson the polluters learned. They made off pretty handsomely, and even got the feds to pay residents to leave. The lesson they learned was that you should do the damage and  ignore it, because the government will give you a pass. The fines may appear large to a public that has little sense of scale, but compared to the profits, they are totally harmless.

We in Portland should teach our polluters a different lesson – if you don’t put something into the environment, it’s not there. But if you do put it there, you will pay the full cost of clean-up, even if it means going bankrupt. You will also pay the full cost of medical bills, and additional fines for the pain and suffering you have caused.

This is the only message that will stop people from wrecking our environment – a message that forces them to internalize their externalities, with a message to politicians that nothing less will do. Otherwise, once we let these costs leave the company’s balance sheet, it makes no economic sense for them to pay for clean-up. This is the internal logic of every corporation, and the reason why people in government need to use a very strong hand in dealing with them. It’s the reason we need objective voices on city council, and community leaders that reject corporate money. If Novick becomes our next city commissioner, we already know where he stands. Money talks. Novick is listening.

On the upside, maybe the Federal government will just pay us all to leave.