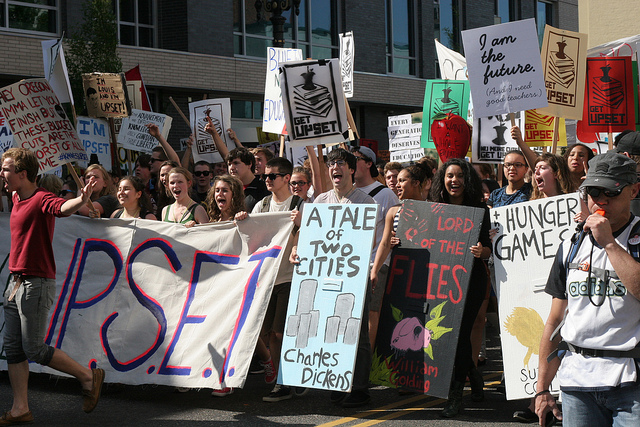 When not enough money for education becomes too much for people to bear, they form organizations like UPSET (Underfunded Parents, Students, Educators Together). In three short weeks UPSET has grown from just an idea to a collaboration between concerned students, parents, teachers, and community members that organized over one thousand people for a march and rally May 11th. The permitted march started at the Rose Quarter, crossed the Broadway Bridge, and ended at Pioneer Square where it was met by another crowd of people who arrived for the rally.

The rally consisted of speeches by students and educators as well as a performance by the Atkinson elementary school choir, as an example of what stands to be lost if cuts continue. A graphic reminder of this were the numerous T-shirts and signs with an apple core either resting on a stack of books or being held with disgust by an authoritative hand. The designer of these logos is Grant High School senior Maria Hardiman. Her initial design was then produced for printing by another Grant High school senior, Bo Knoblauch. Maria related that she is “Fearful for the future of our state and country.” She went on to say, “education is the only thing that touches everyone. It is not an issue for one population; it’s everyone.” Maria also created a large paper sculpture of an apple core which could be seen behind the stage.

Upset is the brainchild of Donald Gavitte, a social studies teacher at Grant high school in Portland. When asked why he started UPSET, Gavitte explained, “Because we can’t take budget cuts any more…. The state legislature and governor continue to cut, continue to ask us to do more and more with less, and what that obviously says to us is that they don’t get it. They don’t understand what a budget cut means. They don’t understand that we’re not offering the same opportunities that you and I had when we were kids, and that is not how society prospers.” He went on to relate how kids are asked to do more and more to graduate, yet teachers can’t even offer students in high school a class every period. There are fewer remedial classes and serious limits on advanced classes that kids need to get into colleges. 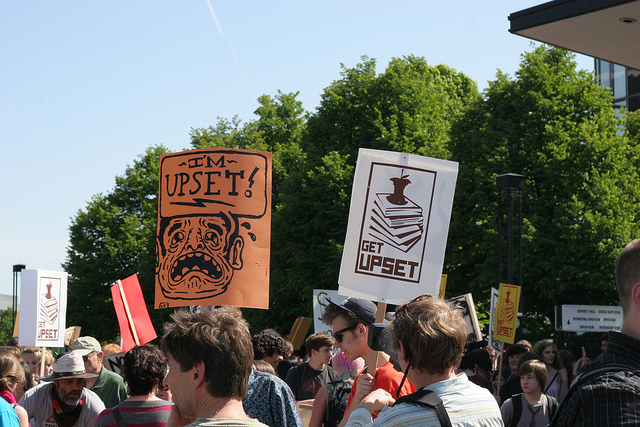 “We are getting pinched from every angle and dying the death of a thousand cuts,” Gavitte explained, adding that he realizes change has to come from the state level and hopes the rally is just the beginning of a state organization. “We hope that in having UPSET organizations in every community in the state, that by the next legislative session we can have a legislative agenda that is pro-education that has a real solution… and that any politician that does not heed our warning will do so at their own peril.” Some local politicians have already taken notice. Mayoral candidates Eileen Brady, Charlie Hales, Jefferson Smith and Cameron Whitten attended the rally, as well as Comissioner Amanda Fritz.

In a short interview Candidate Smith echoed organizers’ sentiments, saying, “I think the only thing that’s going to deal with our school funding shortfall is a statewide solution that is not only one of politicians doing stuff, it is citizens doing stuff.”

Several upcoming actions where citizens can become involved in “doing stuff “ include a virtual lobby event May 21st -23rd sponsored by the Oregon PTA. During the virtual lobby, UPSET urges individuals to write, call and email elected leaders with concerns about the lack of school funding when legislators are in Salem on those days. To find your legislator, go to www.leg.state.or.us/findlegsltr . Write legislators at www.leg.state.or.us/writelegsltr. On May 31st Oregon Save Our Schools (SOS) is calling for a mass action day. Information can be found athttp://www.oregonsos.org/. People interested in becoming a part of UPSET can join at http://goo.gl/zDPHn