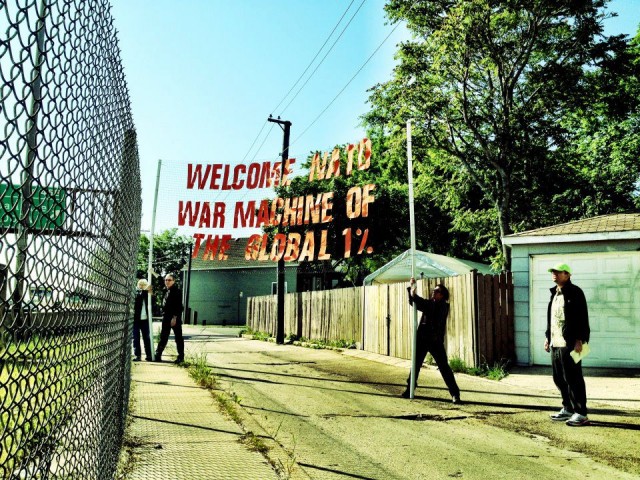 When NATO released a video earlier this month introducing Chicago to the visiting heads of state, it was full of so many errors and missteps—that the city is the capital of Illinois, that President  Obama grew up here, that the Trump Tower is an architectural treasure—it made one ask, just what city were they talking about?

The Chicago being presented to the delegates is the mythic “Global City”: a walk-through postcard of gleaming streets, architectural landmarks and cultural institutions. But the real Chicago will be invisible to most visitors. Beyond the Magnificent Mile is the Chicago most of us live in. It’s an imperfect portrait.

Our city is dotted with foreclosed homes, understaffed hospitals and crowded libraries. It’s a city called home by the West Side high school teacher who buys her own paper to make photocopies; the bus driver whose day starts at 5 a.m., the nurse who’s spent all of her 8-hour shift on her feet. It’s a city in which nearly two million of us every day ride the CTA—much impeded, incidentally, to make way for the dignitaries.

In short, the days of the NATO summit will highlight an already well-developed divide in Chicago: that between the 1% and the 99%.

When Rahm Emanuel first announced that Chicago would be hosting the NATO summit, and that it would bring international standing to the city, communities were skeptical. But the city assured that funding for the $56 million summit would come from the federal government and private donors. Indeed, the NATO Host Committee alleges that the city will even make a profit of $128 million.

But this is a blatant, baseless exaggeration. Big events like Olympics and summits rarely make the host city money. In some cases, the loss has been extreme. When Toronto hosted the G8 and G20 summits in 2010, they eventually cost the city more than $850 million. London’s shortened, two-day G8 summit in 2009 cost the city $30 million.

But even if Chicago did make the money, how would it be spent? Would the people of Chicago have any say over it? If the Tax Increment Financing system shows anything, it’s that this is unlikely.

Protesters have taken the summit as a chance to connect the wars on the poor and on dissent with NATO’s militarization and imperialism.

Afghanistan alone, where NATO and the U.S. have been at war for more than ten years, costs a little under $300 million per day, according to estimates from the Pentagon. Annually, NATO spends $1 trillion. Meanwhile, the poverty line for a family of four is set at $22,000 dollars a year.

Twenty-five percent of children in this country live in families whose money intake is below that line, and suffer from chronic food insecurity. Fifty-two percent of Black men in Chicago are out of work—and jobless rates are higher in neighborhoods of concentrated poverty.

And in our city also live Iraqi refugees—now one of the largest refugee groups in the U.S. These families often lived comfortable lives before the bombs fell but now eke out their livings from low-wage jobs.

NATO’s hosts will be careful to shield the guests from these realities.

Downtown streets are being cordoned off. I-55 is closed. I-90 will be subject to rolling blockades. After dignitaries touch down at O’Hare, their motorcades will careen down the Dan Ryan Expressway to the Loop, forcing Chicagoans off the interstate.

Emanuel’s administration has spent millions on police riot gear, facemasks for their horses, sound cannons, and surveillance equipment—all of which is supposed to sufficiently frighten ordinary Chicagoans away from places the dignitaries could see them.

Nonetheless, people will come. As this article goes to press, street medics, independent journalists and buses of protesters are arriving in our city. Residents are opening their doors to house demonstrators, provide tours of the city, and set up day after day of actions to bring attention to issues such as education, housing, and immigration.

The summit provides the opportunity to bring the real Chicago out into the open—and to allow us to see each other, with challenges and hopes alike, and to organize together. Nurses with veterans, public school teachers with college students, manual laborers with clerical workers.

When the red zone is dismantled, when the guns carried by the hundreds of deputized police officers are put away, Chicago will likely have a debt, a whole lot of cleaning up, and many of the problems it started out the summit with: broken schools, shuttered clinics, deepening poverty and the “shut up and sit down” ordinance. But Chicagoans may also have a new sense of international solidarity, and a community to nurture it with.