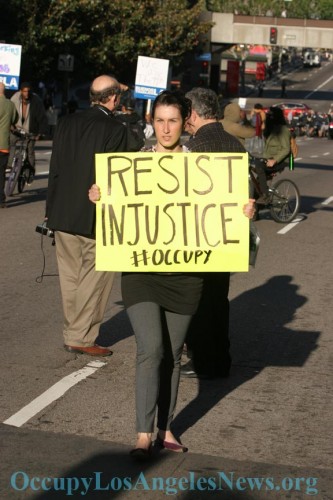 This article is from the Occupied News Wire. It was originally published by Occupy Los Angeles News.

Under cover of the night around twelve police cars stopped five journalists when they were heading back to where they are staying in Chicago during the NATO summit. All five have been covering protests against the NATO summit for the past few days.

The five journalists included Luke Rudkowksi, who streams as @Lukewearechange, Tim Pool, who streams as @Timcast, Jeoff Shively (@Jiraffa), Dustin & Jess. They are known for their work livestreaming and tweeting out regular coverage of Occupy protests.

Rudkowski of We Are Change managed to record the Chicago police approaching the journalists in the car. The police have their guns drawn. They shout, “Hands! Hands! Get your hands up!” And then, “Fuckin’ hands!” Then Pool’s voice can be heard saying, “We’re being raided. For folks who are watching, we are being raided by the CPD right now as we speak.”

There is some trouble with the door. The door is locked and the police are knocking on the windows of the car. The door is opened. A police officer can be heard telling one of the journalists, “Put your coffee down so you don’t burn your crotch.”

Police officers ask a journalist, who I presume is Rudkowski, if he has anything on him. He then is told to leave the camera on the seat of the car.

The video cuts and then we see Shively and Rudkowski recounting what happened. They say police are following them. They add the police would not explain why they were stopped, they were pulled over by unmarked police cars and Rudkowski and Dustin were cuffed together.

The stop happened about midnight or just after. And, according to Pool’s Twitter stream, the police werestill following them on the police scanner around 2 am. They allegedly wanted the targeted journalists to announce where they were staying for the night so they could raid where the journalists were staying.

Pool released a YouTube clip that included audio of the stop.

The stop was another episode of preemptive policing. No person was told why they were being searched. They were put in cuffs and interrogated because police wanted to stop them and put them in cuffs and interrogate them. They know that these people are involved in reporting and livestreaming protests and that made them susceptible to targeting. They know that these journalists also, unlike many of the establishment press, have an interest in calling out the police when they engage in repression or commit violence against protesters.

This surveillance by police has led Pool and Rudkowksi to not want to announce where they are sleeping at night.

The episode was not an isolated incident. @Ghostpickles and @Korgasm who have both been covering Occupy since the early days, reported being interrogated by CPD with others in the middle of the night.

“Ghostpickles” and “Korgasm” (and another person) were sitting by a fence on the side of the road. They were waiting for a ride when a police SUV crept up.

Earlier in the day, something similar but much worse happened. According to “Ghostpickles,” the police “jumped” them. When they went to park their car, they got out and two SUVs full of cops jumped out. The police pushed the group against the vehicles. The police would not identify themselves. They would not explain why they were being cuffed or detained. Their vehicle, including all the property inside, was impounded by the cops.

There appears to have been a conscious targeting of bloggers and livestreamers. The Chicago police, possibly with help from the Department of Homeland Security, FBI or other federal agencies, appear to be working off a list of “suspected” people or spaces where they must go “check in” on what is happening simply to ensure all is safe. Of course, this is illegal. Without a warrant or probable cause, rights are being clearly violated.

In each of these instances, the police did not inform those detained why they were being detained. The police stopped them to find criminal activity that they could then use against the journalists to make arrests. And so far they have not been able to find any justification for arresting any of these people, but they have been able to briefly frighten and infuriate these journalists and also to impound a vehicle.