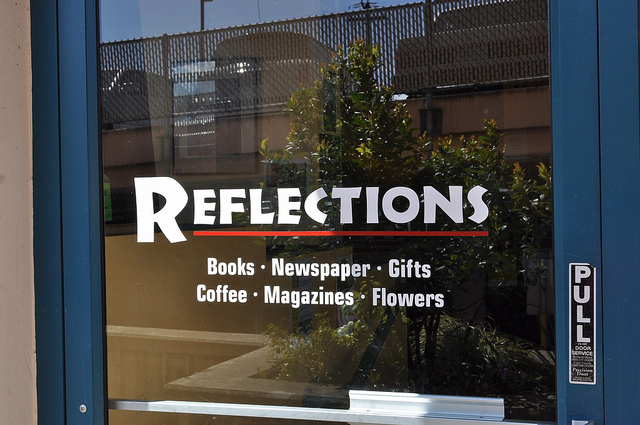 Reflections is a coffee shop where people meet to change the world. It’s a meeting space, book store, theatre, art gallery, music venue, and park. It’s one of the few places in Portland where people can buy African-American greeting cards and cowrie shells, fridge magnets and baskets. It’s a place to play chess, check email, and hang out with friends. By default it’s a community center for northeast Portland, for Occupy Northeast, and for people of color and their allies working for change.

When Gloria McMurtry moved to northeast Portland in 1995, the realtor who found her a house told her, “You need to get involved in the community.” At that time she didn’t expect to become the owner of a coffee shop at the heart of a movement.

“I had no thoughts of starting a business,” McMurtry explains. “The neighborhood said they wanted a coffee shop and book store, and the city hired a marketing firm to find someone to run it. Starbucks didn’t want it. Everybody else declined. So I got to thinking I could put together a team of people. I knew somebody who worked for a coffee roaster. I knew a young lad who’d had a bookstore. Long story short, I ended up investing all I had in it. Sixteen years later, I’m still here, and this thing has a life of its own.”

McMurtry’s background is in retail–she was a dress buyer in Detroit. Later she moved to California and worked for Mobil Oil, which transferred her to Portland. “I felt there was too much rain and not enough black people, not enough community feeling. Then one day I came across the Fremont Bridge and saw a sign that said, ‘Greens: 39 Cents,’ and I knew I’d found my people. They were right here in the northeast.”

Then gentrification happened, the community was fragmented, the war on drugs cleared a number of people out, and she lost her customer base. “But somehow it works. It’s rough, but I’m able to stay in business. I have customers who’ve been coming in here since they were children, and it feels like home to them. I know them by their names, and I know their mamas.” 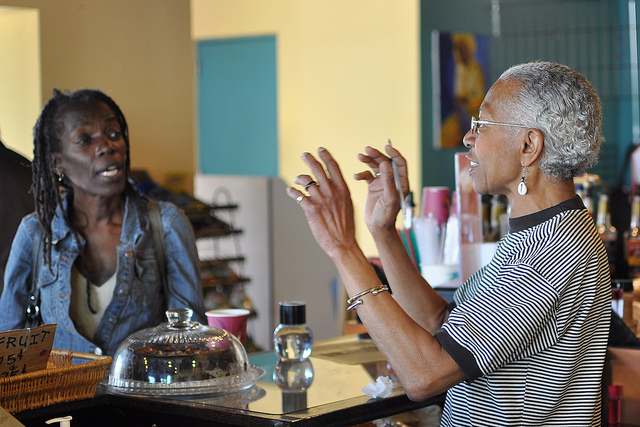 When Occupy Portland started up, Gloria felt a swell of hope for the community, and she’s still riding that hope. “I’m not much interested in politicians,” she says. “I’ve been around long enough to see them come and go. But local action that benefits local people: I’d like to see more of that. I like what’s happening for Alicia Jackson, putting her back in her home that was taken from her.

“That’s why I said Occupy Portland could use my meeting room. I’ve seen some new faces, and business has picked up a bit. Not everybody that comes through the door buys something, and that’s OK with me. I just want people to feel that it’s a friendly place they can come back to, a place to hang out and to buy books.”

She says having the police precinct next door hasn’t made much difference. She tries to maintain a cordial business relationship with them. The police don’t buy much of her coffee, which is a disappointment, but she lets them use her meeting rooms when they want to talk to people in a less threatening environment.

“I’d love to have more Occupiers coming in here,” she says. “Most of the books I carry are non-fiction, but I can order anything that’s in print and save people the cost of shipping if they come in to pick up what they’ve ordered.”

She also welcomes the Occupy community to Tuesday evenings at Reflections: the first and third Tuesdays are for music, and the second and fourth Tuesdays are for open mic poetry reading. She’d love to have play-readings, book-readings, and other events at the store and outside, near the wading pool with a mural by Baba Wague Dialike from Mali. “Whatever Powell’s does downtown, I can do it here,” she says, “in a homey atmosphere with good coffee and tea.”

To order books or check on events, readings, and music, call Gloria at 503-288-4070 or send her an email: gloria at talkingdrumbookstore dot com.