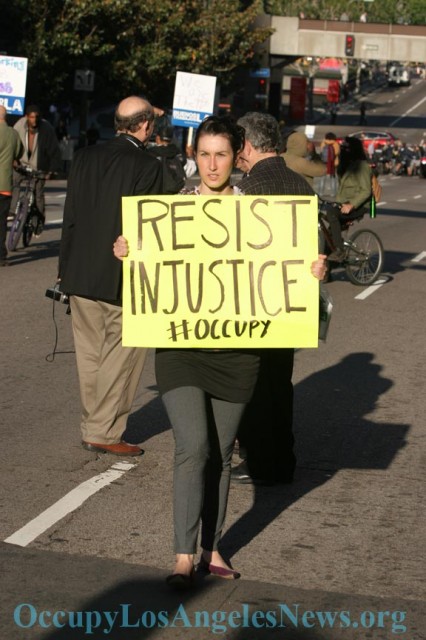 At Portland State University, more than 50 students and community members participated in a demonstration to protest a presentation by Islamophobe and Israeli-apartheid apologist, Erick Stakelbeck.  Protesters entered the presentation with tape over their mouths, holding signs that read, “Show Racism the Red Card”, “Your Bigotry is Showing”, and “Free Palestine.” Twenty minutes into the presentation the demonstrators, which made up half the crowd, walked out together to send a message that Islamophobia is not welcomed on campus.

The reaction to the demonstration was a familiar one for those involved in Palestinian solidarity work, label your opponents as anti-semites to deflect attention from your own bigotry and immoral support for the oppression of the Palestinian people.  In this case, not only was the charge of anti-semitism against the protesters unfounded, but ironically the organization making the charge turned out itself to be truly anti-semitic.

The guest speaker, Erick Stakelbeck, is best known for his TV show “Stakelbeck on Terror,” a show that airs on the fundamentalist Christian Broadcasting Network (CBN) and features Stakelbeck stoking the fires of religious intolerance and hatred by regularly equating Islam with Terrorism.

Last year, Stakelbeck released a book titled The Terrorist Next Door: How the Government is Deceiving You about the Islamist Threat in which he claims that acts of terrorism frequently attributed to Muslims are not the act of “isolated extremists” but instead are inherent to the Muslim religion.  Stakelbeck warns that Muslim extremists have infiltrated cities all over the United States; including Dearborn, Michigan which he mockingly calls “Dearbornistan” and characterizes it as a “radical Islamic enclave.”

Stakelbeck’s warped logic is not only Islamophobic, it advocates discrimination as a part of a solution to what he perceives as a Muslim threat. The danger in this logic becomes clear when Stakelbeck comes to the conclusion that, “The US government cannot be relied on for protection… because it is crippled by political correctness and a lack of cultural self-confidence.”  For Stakelbeck and his rightwing promoters, the rampant vilification of Muslims by U.S. politicians,  the countless civil rights violations Muslims have suffered since September 11th, and  the hundreds of thousands of Muslim lives lost as a result the US “War on Terror” are clearly not enough.  One can only imagine what the horror of a less “politically correct” and more “culturally self-confident” response from the US government would look like.

In response to the silent protest, CUFI tried to smear the protestors as anti-semites by falsely connecting them with the defacement of a flier advertising Stakelbeck’s presentation; an unknown person had altered a flier by drawing a swastika inside of the Israeli flag, and writing next to it the words, “Never again includes Palestinians”.

While one may disagree with the wisdom of using a swastika to send any political message, the intent of the person who wrote the comment was clearly not to harass and intimidate Jewish students, as CUFI suggested. Palestinians have been isolated into increasingly smaller ghettos, surrounded by checkpoints and massive walls.  Several months ago Israeli papers reported on an ultra-nationalist Israeli mob attacking Arabs in shopping centers while chanting “Death to Arabs,” and Israeli politicians regularly stoke this hatred by calling for the expulsion of the Palestinian citizens of Israel. After sixty years of dealing injustice to the Palestinians in the name of a “Jewish State,” it’s not surprising that many leverage moral indignation at Nazi crimes against the Jewish people to draw attention to oppression of the Palestinians by the State of Israel.  If the lesson of the holocaust is truly “never again” for anyone, then the person who altered the flier is correct- this should include Palestinians.

With this said, it must be made clear that for Christian Zionist organizations like CUFI, the charge of anti-semitism is no more than a smokescreen to hide their own racist agenda. Christian Zionists are a part of the extreme right-wing Christian evangelical movement.  The Founder and National Chairman of CUFI is none other than John Hagee, the senior pastor of the Cornerstone Mega Church in San Antonio, Texas and the CEO of Global Evangelism Television (GETV).   Hagee is notorious for spewing racist, homophobic, and sexist ideas.

In 2004 Hagee authored, What Every Man Wants in a Woman: 10 Essentials for Growing Deeper in Love, a cornucopia of misogyny and sexism, whose main premise was that, “Man has the God-given role to be the loving leader of the home.”
In 2008, Hagee’s church newsletter actually advertised a “slave” sale to help young people find jobs in the community with an ad titled, “Slavery in America is returning to Cornerstone.”  Some of Hagee’s most vile comments came just days after Hurricane Katrina; he preached that the hurricane was God’s punishment on New Orleans for holding a gay pride parade the week preceding the tragedy.

With this laundry list of hate, it’s no surprise that just beneath the surface, organizations like CUFI are fundamentally anti-semitic.

As Bruce Wilson, writer for Talk to Action, in an investigative piece on CUFI’s founder explains:

“A close analysis of Pastor Hagee’s views seems to indicate that Hagee holds beliefs about liberal Jews that mirror sentiments to be found on conspiratorial websites promoting the debunked Protocols Of The Elders Of Zion… Hagee also blames the Holocaust on Jews themselves and states that Nazi persecution of Jews was God’s way of driving Jews to Israel, seems to blame Jews for the death of Jesus Christ, holds that Jews cannot get into heaven, calls liberal Jews “poisoned” and “spiritually blind”, believes that the preemptive nuclear attack on Iran that he advocates will lead to a Mideast conflict that will kill most Jews in Israel.”

Yet, at Portland State University, Portland Hillel co-sponsored an event with CUFI the day following Stakelbeck’s event. Zionist groups such as AIPAC, Hillel, and Stand With Israel regularly collaborate with Christian Zionist Organizations, despite having members and leaders who openly hold and promote such views.

While this may seem shocking, capitulation to anti-semitism has been an important thread in the history of Zionism. Theodore Herzel, who is considered the “father” of Political Zionism, stated:

“I achieved a freer attitude toward anti-Semitism, which I now began to understand historically and to pardon. Above all, I recognized the emptiness and futility of trying to combat anti-Semitism.”

This “pardoning” of anti-semitism is central in Zionism’s claim that the only solution is the separation of Jews from non-Jews through the creation of a “Jewish State.”  Zionists and anti-semites both agree on the need for this separation, and this convergence is the reason anti-semitic organizations such as CUFI can call themselves ardent Zionists and be accepted by most Zionist organization as allies.

“It does not necessarily matter to AIPAC if you preach “New World Order/Illuminati” conspiracy theories involving “international bankers,” a classic coded anti-Semitic trope. Nor does it necessarily matter to them if the rhetoric you have spewed about the Holocaust sounds like a Christian version of Mahmoud Ahmadinejad. …What matters more to AIPAC and its allies — all that matters perhaps — is that you back the hardline Israeli government without reservation, support the institutionalized dehumanization of Palestinians and offer crucial moral support for the illegal usurpation of Palestinian land.”

Right-wingers like Hagee not only hold anti-Jewish views, but the Islamophobia which is their bread and butter also parallels classic anti-semitic themes from the early 20th century.

European anti-semitism promoted the idea that Jews were untrustworthy and mysterious outsiders, plotting a conspiracy to take control of the world. The Protocols of the Elders of Zion, written by Tsarist secret police to create divisions among Russian revolutionaries, perpetuated this idea while attacking the communist movement as a Jewish plot to trick the working class.  Hitler himself incorporated these ideas into Mein Kempf , writing that communism was “Jewry’s twentieth century effort to take world dominion unto itself.”

The main purpose of these ideas was  to render the capitalist class, the real rulers of Europe, invisible by shifting class anger onto the Jewish population, while simultaneously undermining the Communist movement- the only political force that could expose and challenge the rule of German capital.

Stakelbeck’s explanation for the PSU student protest mirrors this classic anti-semitic theme simply by replacing Jews with Muslims.  After the PSU protest, Stakelbeck dedicated his next show to, “Exposing the unholy alliance that has developed between radical Islam and the radical left”.

The connection of “Radical Islam” and the “Radical Left” is a regular theme among Right-wing pundits, ranging from Fox News to the Christian Broadcasting Network.  One author, Andrew McCarthy, has made a career out of writing books on this subject with titles such as The Grand Jihad: How Islam and the Left Sabotage America.

In these narratives Muslims, just like the Jews of Europe, are portrayed as mysterious and dangerous outsiders who cannot be trusted.  Instead of a Global Jewish Conspiracy, today’s racists warn of the threat of Muslim domination in the form of a “global caliphate”.  Past anti-semites talked of Jewish infestation, today’s racists speak of “creeping sharia” and the spread of “Extremist Islamic Enclaves”.  Jews were charged with being the puppet masters of Europe through supposed control of the banks, and today it is insinuated that Muslims control the highest office in the land– after all, Obama is a secret Muslim.  In all of these scenarios, the Muslim conspiracy is fused with a leftist, Socialist, or Marxist conspiracy.

Clearly the right’s habit of lumping together “Islamists” and “Socialist” can’t simply be written off to political idiocy. Today’s racists lack creativity; they have resurrected the conspiracies of their predecessors in order to protect their present day corporate overlords.

Capitalists today are attempting to solve the economic crisis on the backs of working class Americans through massive cuts to social spending. As workers continue to fight back against austerity, the capitalist class will keep relying on right-wing ideas to shift the focus away from the 1% by using Muslims as a scapegoat, while simultaneously attacking the Left.

Thanks to the Occupy Movement the right has been on the defensive as thousands of Americans have broken out of the two-party straitjacket on the left side of the political spectrum.  But with no end in sight to the economic crisis, politics will continue to polarize. This is why those who care about justice must continue to build a fighting left that stands up to oppression in all its forms whether Islamophobic or Homophobic, Sexist or Anti-Semitic.