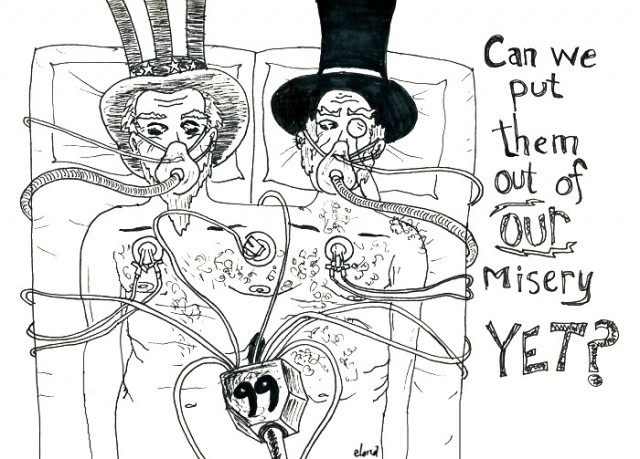 Capitalists are great at making money but they’re terrible at predicting the future. All those dollar signs get in the way of seriously looking at the long-term consequences of their actions. Our government is run by and for capitalists. That’s why the U.S. spends half of the global total on militarization. Capitalism takes enormous amounts of resources to maintain because capitalism is a constant fight against humanity and the rest of nature for short term gains. Capitalism depends on the consumer constantly being unsatisfied. All that tax money is being spent on imposing capitalism in other countries and protecting limited resources, making sure international corporations maintain their stranglehold around the world while fighting those who resist. However resources are running out and if we don’t look ahead we really will kill ourselves. Perhaps we should let Uncle Sam and Uncle Scrooge die so that we may have the chance to thrive.

If it’s not clear in your mind already, capitalism is not “how you make a living without working for the government” as many think it is. That phrase should be interpreted as entrepreneurship. Entrepreneurship nestles well into any self-organized group of people. Capitalism cannot. Our ancestors began using tools roughly 2.6 million years ago. We’ve been opportunists and entrepreneurs for a long time. However it wasn’t until we lost our tribal connections that we started taking our entrepreneurship to dangerous levels that currently hold our planet and all its life hostage. Capitalism by definition must generate a profit. It’s not enough to simply survive and thrive, there must be a constant stream of excess that as history has shown, inevitably collects in the hands of a few. Thus we live in a governmental system dictated by an economic system that makes sure we are seen as nothing but profit generators regardless of the world-wide damage done in the process. The commerce clause and contract clauses written right into the U.S. constitution make it be so. Coupled with a series of horribly made U.S. supreme court decisions, what we thought was democracy actually turns out to be a corporatocracy. And it must be stopped.

The U.S. government and capitalism are intertwined like a pair of siamese twins where if one was to be changed dramatically the other would not survive. The question, “what does Occupy want?” has been incredibly difficult to answer because of this interlocked relationship. Occupy is not fighting one evil core but two working side by side, and together they represent the most powerful individuals on this planet. That’s not to say that we the masses don’t represent an equally if not more powerful force than these individuals, however we don’t globally recognize our power quite yet. We can catch glimpses of it when 500,000 Quebecois fill the streets of Montreal. Or when just one of us stands up, empty-pocketed, and outbids those who would rather destroy the little wildness we have left in the U.S. I don’t think I’m alone when I say what I want is to live a more harmonious life. And capitalism, driven by making sure that consumers are always lacking, will never let me live that harmonious life. And so it is capitalism that must be stopped. And in tandem, so must all those who hold up and protect our federal government which holds up and protects capitalism.

We can weaken capitalism and the federal government several ways in order to seek the peace we desire. Beginning by educating ourselves enough to understand how we’ve been violated over and over again in the past 236 years and moving onto collective actions, we can possibly give humanity a fighting chance. There are many biocentrists who would say that humanity shat away its chances. That humans have done enough damage on the planet and it’s time to let our species die off as quickly as possible. I’m not planning on having children but I also can’t help but hold onto a little hope while I’m alive, helping those who don’t see yet open their eyes a little wider.

Corporate welfare doesn’t just come in the form of tax loopholes and laws that favor big business. It also takes the shape of us thinking that voting matters when almost every politician in office got there by scratching the backs of big business. It looks like us paying our taxes to the federal government when most of that money is used to protect corporate interests while keeping us wage slaves. It looks like us paying our debts to big banks while our taxes pay for their private jets through bogus bailouts. It’s time to recognize our power and use it for good. Let’s stop holding up their pillars of support. Let’s collectively stop paying our debts and taxes. Let’s step back and support each other instead of the 1%. Let’s stop relying on them for jobs and make jobs ourselves by supporting and investing in each other. Through neighborhood trade circles, seed swaps, job boards and our own currency systems we can trim the fat and make a living. Let’s tax ourselves and collect that labor or money to keep our communities functioning.

A while ago I spent four dollars on a poster called the “D.I.Y. Manifesto”. It’s made right here in Puddletown, Cascadia by a fellow named Rufus H. Wright. You can get your own copy through Microcosm Publishing. Although available online, there is no easily readable version. But I felt it too important not to share, and thankfully Rufus is cool with it, so here it is, typed out below for your viewing and sharing pleasure. Just don’t recopy it for profit, you capitalist.

Our foreign policy is a fetid glop of belligerent macho and corporate opportunism. Our economic policy is an open giveaway to the same smooth-talking carpetbaggers who looted our lands, stripped our industrial legacy, and abandoned our kids. And nothing more than “discretionary” White House policy is left to protect us from a full-on police state.

Well then, so be it.

We are walking out. We can sew our own clothes, grow our own food, teach our own kids, make our own music, and even build our own supercomputers however and whenever we feel like it.

Between us we know bike repair and cooking and programming and writing and singing and particle physics and we’re teaching it to each other.

We are building alternatives to all of your plastic crap. Every last bit.

Consider the reworked clothes and piercings and purple hair. You’ve gotten so used to seeing it all, you’ve forgotten that it ever means anything.

It does. It means Screw Your Norms and Your Assumptions. I Do As I Choose.

It was “social misfits” like us who invented modern computers, media, cuisine, and a hell of a lot more and we’ve figured out that we don’t have to play your game.
And now we’re spreading the word.

Greens fuel cars with used grease and construction workers run their tools with solar panels. Yuppie lawyers are moving into intentional communities while suburban housewives buy organic food. People are starting to get it.

Where can we live? In strawbale houses and abandoned buildings and big group houses in the neighborhoods you don’t even see.

What can we eat? Stuff we grow on rooftops, in backyards, in planters made of milk crates lined with one dollar shower curtains and wherever else we see wasted space.
Along with, of course, stuff from our food co-ops and your dumpsters.

What can we wear? Your cast-offs, stuff we swap among us, stuff we sew and cut down and spiff up and rework a hundred different ways.

How can we spread our knowledge? With skill shares and zines and open source software and music and websites and stuff like this poster. We’re homeschooling our kids and doing teach-ins and creating copyleft educational materials and buying used textbooks for ten cents on the dollar.

What can we do for money? We get by with less, barter between us, sell what we make, and sell our services to folks we respect.

How can we get around? By bikes everywhere, by mass transit when we can, with biodiesel cars where we must. With skateboards and scooters and plain ol’ walkin’.
Long distance? Ride shares, Green Tortoise, and converted panel vans.

What do we do for fun? Music and parties and bands with our friends in them and art and feasts that we’ve made and the sex, drugs, and rock and roll we’ve had all along.
And no television at all.

And we will live happy and laugh last.

This poster, both text and design are copyright of Rustin H. Wright but may be reproduced for any non-commercial purpose without restriction as long as you include this notice.