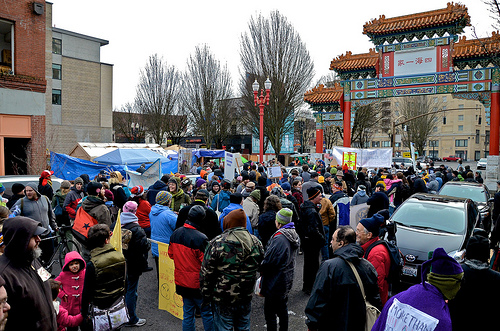 Since last September, the genius of the Occupy movement was to literally and physically occupy places and institutions and symbolically reclaim the people’s ownership and power over them.  In our encampments, we went one step further by demonstrating a new way of community, free from domination by the One Percent.  There is a reason why we do not call this movement “Protest Wall Street”, but rather Occupy Wall Street.  It is one thing to petition the powerful for more handouts and protest the powers-that-be without speaking of a workable alternative.  It is, however, completely different when we finally step up and occupy the world.

This June, a call to worldwide action has been made from Occupy Wall Street’s LGBTQ caucus to occupy the Pride parades and festivals throughout this summer, as a reminder that the “struggle for sexual and gender justice continues”.  In spite of the repeal of Don’t Ask Don’t Tell policy and President Obama’s voiced support for same-sex marriages, serious human rights abuses on queer people continue unabated throughout the world.  Those who are low-income, disabled, people of color, gender-atypical, under the age of majority, unhoused, or otherwise marginalized by the larger society in addition to their actual or perceived sexual orientation, especially continue to be subjected to violence by criminals and the government alike, and are routinely deprived of social, economic, cultural, and civil rights.  The much-heralded “accomplishments” in the largely white, middle-class, professional gay and lesbian political interest group have shifted the attention of the mainstream media, elected officials, and ordinary people away from the somber realities of hate crimes, discrimination and oppression.

Along with these “accomplishments”, a troubling trend is also emerging: the tendency of large corporations to exploit the profitable elements of gay identity and gay culture for the purpose of marketing and profits.  Yet, these same companies also often contribute to politicians who promote and vote for bills that run contrary to the aims of sexual minority rights, and some are even members of organizations such as American Legislative Exchange Council (ALEC).  Since ALEC-inspired bills attempt to end social safety net programs and publicly-funded healthcare, while also pushing for a massive expansion of prisons and immigrant detention facilities across the U.S., companies who donate to ALEC cannot be allowed to gain social acceptance merely by buying booth space at various Pride events around the world.

A profound sense of complacency during the past four years of the Obama Administration, and, in Oregon, a long period of relative freedom and calm in the aftermath of the fall of the Oregon Citizens’ Alliance, has allowed the spirit of human rights activism and struggle for equality to fade away, leaving the Pride — and the very queer identities — to be co-opted by the commercial interests and sold as packaged merchandise.

While it is true that putting together an event as large as Pride Northwest is tremendously expensive, and most of those costs are borne by local small- and mid-sized businesses, the strongly commercialized overtone of the Pride parade and festival is taking the real spirit of the Pride — camaraderie, solidarity, community, and, yes, pride — away from the events.  No one should feel like they should “pay to be gay” — that they cannot be a member of Portland’s queer community unless they have money to spend on anything from booze to a gay cruise ship package.

As a multicultural queer person of color, who has lived a life of both privilege and extreme poverty, I have mixed feelings about the Pride every year.  I am not interested in buying a nicely pre-packaged “LGBTQ identity” to fit in and become someone that I am not.  The false facade of “the LGBTQ community” and a constant pressure for this nebulous “community” to feel some kind of make-believe monolithic unity is, ironically, as conformist as the kinds of culture from which many queer people have fled.

Like a patriotic event on the Fourth of July, the Pride event often creates an illusory unity under a sentiment that we somehow must be unquestionably assimilated into a unified, homogeneous “community”, right or wrong.  As I can sense from the kind of objections and hostilities I have faced from both the larger Occupy Portland community and from local LGBTQ people, this illusion is so powerful that questioning the Pride is apparently a mortal sin.  Such an illusion conveniently masks the realities of systemic violence and marginalization faced by queer people who do not nicely fit into the ideation of LGBT individuals that the One Percent finds acceptable, due to their market potentials and political utility.

Occupride NYC has dedicated the Occupride actions in solidarity with CeCe McDonald.  In many ways CeCe is the epitome of the other queer community that still faces a tremendous degree of human rights abuses and injustices.

By occupying the Pride, we do not mean “protest the Pride”, but rather “reclaim the Pride and make it ours”.  Money out of Pride–it should not be an advertising campaign for any business that can afford to buy a booth or a float.  This year, I call on the queer communities of Portland to truly celebrate our strengths and pride.

For up-to-date Occupy The Pride Portland information, please visit http://occupridepdx.wordpress.com. In addition, some members of Sisters In Strength, Women of Occupy Portland, are planning to join the Dyke March Portland on Saturday, June 16.

2 comments for “Why Occupy the Pride?”