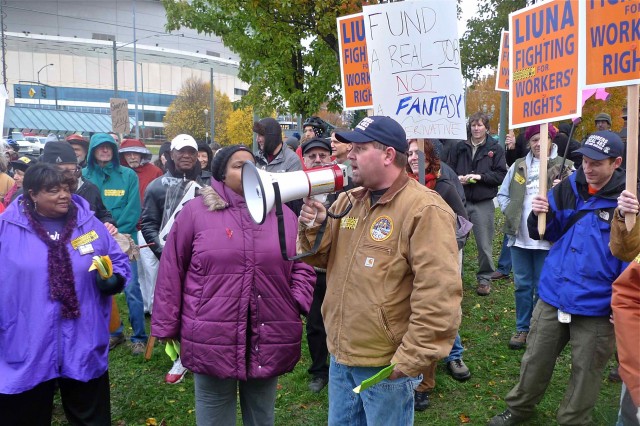 The labor movement had better do some deep soul searching, and fast. Although the defeat in Wisconsin is the horrible end to a local drama, the corporate winners hope to turn their victory into the beginning chapter of a national novel. The opening sentence was perhaps written recently in San Diego and San Jose, where voters agreed to cut union pensions to resolve a budget deficit, a corporate solution backed by a Republican mayor and a Democratic mayor respectively, and soon to be expanded nationally.

There can be no mistaking the dire consequence of these events; the anti-union forces are not merely celebrating a tremendous victory, but organizing for new ones. Unless the labor movement educates and re-organizes its forces quickly, the recent losses will serve as a catalyst for union busting on a national scale, unseen in modern times. As the recession lumbers on – and likely intensifies – the wealthy will continue to shift all blame, away from themselves, towards unions that will be targeted for destruction.

The Kansas City Star recently gave a small glimpse of the future challenges for unions:

“Upcoming battles will test just how far the economy will force unions to bend. New Hampshire will probably face a right-to-work measure when its Democratic governor steps down; Iowa is looking to require state workers to pay more on their health insurance premiums; Pennsylvania legislators plan to substitute 401(k)s for defined benefit plans for state employees.”

The nation’s anti-union environment was already at a fever pitch. President Obama has, contrary to expectations, served over the most anti-union political climate since Ronald Reagan. The President of the nation’s largest teachers’ union, Dennis Van Roekel, summarized teachers’ experience with the Obama Administration:

“Today our members face the most anti-educator, anti-union, anti-student environment I have ever experienced.” He was referring, in part, to Obama’s anti-union Race to the Top education program and his promotion of charter schools.

Many within the union movement wrongly blame Republicans exclusively for labor’s plight. But no fewer than eleven Democratic governors in the past two years have targeted and attacked the public sector unions in their states, blaming labor for the budget deficits caused by the recession, itself caused by the banks and corporations. More than 600,000 public sector jobs have been lost since 2009, many of them union jobs. The re-emerging recession will re-impose this budget deficit challenge for unions for years to come. Will unions learn from their mistakes?

Instead of alerting workers to the new anti-union actions of the Democrats, union officials have miseducated their members by focusing rage solely on the Republican governors of Wisconsin, Ohio, Indiana, etc. As bad as these governors are, they don’t exist in a political vacuum. The Republicans have been given new life by the new anti-labor attitude of the Democrats; instead of mounting a vigorous defense of these Republican-targeted unions, Democrats have also been busy steamrolling unions across the country, while cynically pretending to “respect collective bargaining rights” at the same time.

In order to maintain their friendship with the union-attacking Democrats, labor leaders made an artificial, suicidal distinction between fighting to maintain bargaining rights (against Republican attackers) and accepting massive concessions demanded by Democratic attackers.

But these twin attacks on unions are two sides of the same coin: accepting concessions without a fight drastically weakens unions, enough to be vulnerable to losing bargaining rights. It was Republicans who demanded concessions today; it will be Democrats who attack bargaining rights tomorrow. Indeed, Democratic politicians in New Jersey have already worked with the Republican governor to strip public employees of collective bargaining rights, a stark reminder that labor unions have no political party of their own.

Forty years ago it would be unthinkable to target bargaining rights, since unions were militant organizations that struck fear in the hearts of the corporate elite; it would have also been unthinkable to demand the concessions being demanded today.

But over the years labor became more bark than bite: when Democrats started demanding concessions labor simply rolled over and exposed its belly, instead of roaring back and tearing at its attackers. Union members don’t mind paying dues when the money goes to a Pit Bull instead of a Chihuahua.

It was the Pit Bull that inspired the movement in Wisconsin. Non-union workers joined the movement in huge numbers because they saw a real fight-back, not just against a Republican Governor, but against the decades-long, anti-worker status quo; they were inspired by working people acting independently and powerfully. Alas, this independence and power was stupidly funneled into the electoral realm, placed in the hands of a corporate Democrat who inspired no one, having previously attacked the wages and benefits of unions as the Democratic mayor of Milwaukee.

The loss in Wisconsin should have been no surprise, since labor has been losing by this strategy for decades. The strategy of collective action and the strike have been forsaken for political donations and campaigning for Democrats. Meanwhile concessions are made, wages and benefits reduced, income inequality rises, and fewer non-union members are inspired enough to join a union. This cycle must end if the labor movement is to survive.

But the current crop of labor leaders will be too focused on campaigning for Obama to deeply reflect on a new strategy, the same president who purposely did not visit Wisconsin before the recall election. Instead of channeling money into strike funds, money will be removed from strike funds to give to Obama, who will again use the money to attack unions if he is re-elected.

New leaders and new ideas are needed in labor. The pre-recall events in Wisconsin are a good place to start. Labor must mobilize itself and the broader community in the streets if it is to be effective. But labor cannot do this while supporting Democrats. Why?

Labor can only inspire and mobilize the broader community if it puts up a real fight for the demands of all working people: for millions of jobs and fully funded education, to fully funded Medicare, Medicaid, and all social services. To campaign for Democrats who are undermining these services is to expose the lack of seriousness of labor’s demands to the wider community. Union and non-union members need to trust labor’s leadership if they are to fight alongside them; trust is lost when Democrats are praised after attacking unions and cutting services in order to balance budgets.

Also, Labor cannot financially afford a real fight for jobs and services while campaigning for Democrats. Nor can labor win over the 99% while supporting a political party of the 1%. The Democrats have become a massive obstacle to unions, a dead weight around labor’s neck that prevents necessary movement, as well as an attacker that asks for money to continue the attack.

If labor declared war against job-killing austerity and for a massive federal jobs program to create 25 million jobs, millions of non-union workers would clamor to join the labor movement, flooding the streets in the process. To fund these demands labor must also declare war on the corporations, demanding that they and their wealthy owners be heavily taxed to pay for jobs, education and services. In a country torn by economic inequality, budget deficits and jobs must be paid for only by those who can afford to pay, not working people.

Labor cannot water down its demands if it is to survive. Nor can labor accept what is politically “practical” for Democrats. There are two roads available for labor at the moment: one is the status quo that will quickly end in self-destruction; the other is the path tread by prior generations of the labor movement, that relied on collective action and courage in the face of corporate adversity.