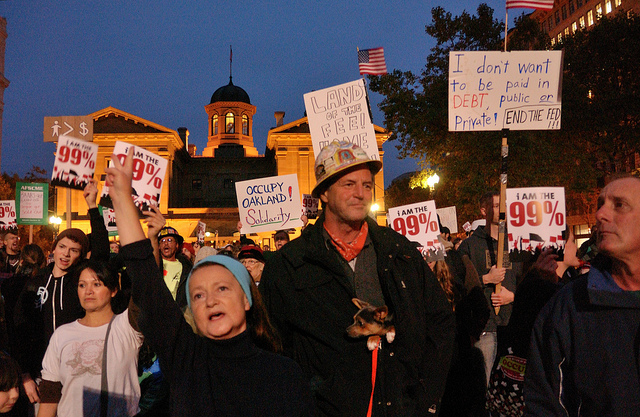 This article originally appeared at Counterpunch.org.

Unions were originally built on the principle of solidarity. Workers soon realized that as individuals they were powerless when trying to defend their interests in relation to their profit-maximizing employers. But when they were organized and stood together, their combination gave them the upper hand. Under the banner of “an injury to one is an injury to all,” workers went on to make historic gains in their standard of living by acting collectively – gains that we still enjoy today, although they are under attack.

However, in the current period, electoral politics has come to replace the principle of solidarity. Rather than mobilize their members to stand together on picket lines, union leaders typically devote their energies to electing Democrats to office. This means that most union members remain at home, uninvolved and disengaged. At most, some of them agree to go to some union hall to do “phone banking” in order to “get out the vote.” But there is little interaction among those who participate since they are absorbed with making one call after another, reading a text that has been written out for them and trying not to sound robotic.

On rare occasions when unions do call a strike, other unions usually remain uninvolved. At worst, they will cross the picket lines.

But now we find out that this absence of solidarity has been taken to a new high in New York. According to The New York Times (“Donations Show a Rift Among Unions,” June 8, 2012), several of the building trades unions have joined the Committee to Save New York, which is funded primarily by business interests, particularly real estate interests, and is dedicated to reducing the salary and benefits of public workers. These building trades unions have contributed $500,000 to the committee to help launch the attack on their “brothers and sisters” in the public unions.

The logic of the building trade unions is simple: the less the state of New York pays its public employees, the more money is available for infrastructure and publicly financed building projects which provide their members with employment.
And it is not surprising that they would turn in this direction. Surrounded by the culture of capitalism where self-interest and competition prevail, these unions are implementing the logic of their surrounding culture.

Unfortunately, while this narrow self-interested logic works fine for the capitalists, since they cannot survive unless they compete effectively, it proves disastrous for working people in general and unions in particular.  But a little background is necessary to understand why.

During the 1930s, in the heart of the Great Depression, unions were struggling at their workplaces and in the streets for a better life. Their struggles gave birth to the government adopting such programs as Social Security, unemployment insurance, welfare, and union recognition that included the requirement that employers bargain with them. And at work they won higher wages and better benefits.

These gains led to a rise in the standard of living for working people that continued well into the 1960s, and their success led to a growth in union membership. Each new generation of working people were better off than their parents. However, in the 1970s the union movement seemed to hit a brick wall and began to wane. The rich took full advantage of the situation. With little in the way of opposition, they managed to convince politicians – both Democrats and Republicans – to bestow on them all kinds of tax breaks. Banks and corporations also won less regulation. And these developments gave rise to rapidly growing inequalities in wealth that have continued into the present. These inequalities are now greater than they were just prior to the Great Depression.

With taxes on the corporations and the rich having plummeted, federal, state and municipal budgets have suffered major deficits. And these deficits have then served as an excuse to lay off public workers, reduce their salaries and pensions, and raise tuition at public colleges and universities. Meanwhile, workers in the private sector have been hit hard by the Great Recession and the migration of jobs overseas. They too have suffered reduced salaries and pensions, on top of massive layoffs.

Accordingly, the unions stand at a crossroads. They can accept the growing inequalities in wealth as a fact of nature beyond human control and compete with one another for the crumbs. Or they can mobilize their ranks, bring public and private sector workers together, and mount a massive campaign, demanding that the government raise taxes on the rich to such a high degree that there would be plenty of money to fund our schools, restore social services, and establish a federal jobs program that would put everyone to work. Options like these have given rise to the cliché, “If we do not hang together, we will hang separately.”

In the absence of such a concerted campaign, there should be little surprise that the building trades unions in New York chose to think only of themselves. But it is not too late for organized labor to execute a turn away from electing Democrats and reaffirm its roots with massive demonstrations in the streets.

Ann Robertson is a Lecturer at San Francisco State University and a member of the California Faculty Association. Bill Leumer is a member of the International Brotherhood of Teamsters, Local 853 (ret.). Both are writers for Workers Action and may be reached at [email protected].