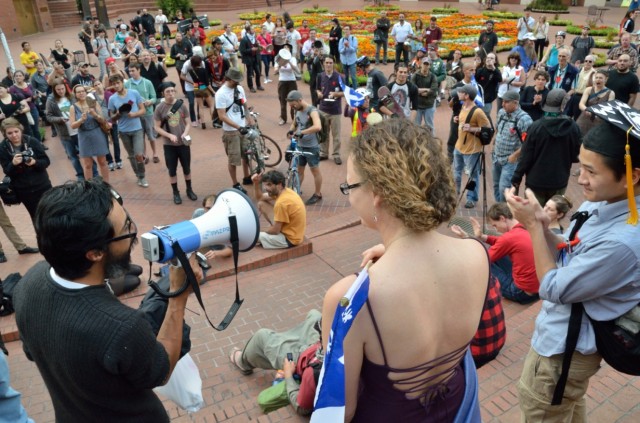 Watching several hundred protesters bang pots & pans together in solidarity with Quebec on a Monday evening,  marching around the square and clamoring loudly in front of both mainstream media and livestream cameras alike, one might be tempted to conclude that Occupy in Portland continues to be a powerful and persuasive force challenging the status quo in the public sphere.

Had I not spent the last eight days in May watching OWS protest in solidarity with Quebec students–albeit in a far different manner–I too might be tempted to see PDX’s effort at Quebec solidarity in a different light.

In fact, the difference between the two couldn’t be more apparent, even though at both events the participants were dressed almost identically, right down to the red squares and casserole pans.

Every night I was in NYC, in Washington Square in the shadow of NYU, Occupy (Wall St.) had a protest march in solidarity with students in Quebec. Of the 8 nights I spent in NY, I went on 6 marches. Most nights, it was between 20-30 people. One night there were 50. (Of course, the night I left they had 200.) Horrible numbers, everyone there readily admitted. OWS marched anyway and it was fun. Really fun.

Their “bike swarm” was a fleet of 2–half that one night, none on another. OWS marched anyway.

Three of the six nights it rained, including a full downpour twice. OWS marched anyway, and it was even more fun BECAUSE of the rain.

Every night, into the streets.

Not in the calculated, “I have a right to be here” manner reminiscent of OPDX–big in numbers for safety, traffic stopped by the bike swarm blocks away, bike cops all up in our junk–but in a totally different manner.  Nimble. Fluid. Strategic.

After six nights, what emerged for me were the advanced marching tactics OWS had evolved to become safer while growing its visibility.

More importantly, I learned why sitting in Pioneer Square, walking around in a circle banging a pan as an act of “solidarity” with our brothers and sisters in Canada misses the mark for me as an activist.

For strategic reasons of my own, I am not going to reveal any specifics on how taking streets, maximizing effectiveness and exposure, and staying safe is engineered on the streets of NYC. My hope is that what is transferable to Portland can be adopted, and what is not applicable will be revealed.

Rather then give the cops a heads-up and lose the pivotal element of surprise by revealing potential ideas here in our hometown Occupy paper, surely perused daily by our bloated (both in numbers and waistline) “civil servants”, I’d kinda just prefer to see OPDX integrate some of what works 3,000 miles away next time the situation seems appropriate.

I’m just kinda funny that way with tipping my hand to the people who don’t want us to succeed as a movement.

What I do want to report is how mic-checking, dancing, chanting, marching in the street and running away from cops to specific places for an hour or so made me feel.

Like my efforts were worth something. Like I was effecting real change by being part of a march with 10 targeted mic-checks aimed at 50 to 100 people each time, seeing the curiosity turn to solidarity from those looking on, wondering what these 30 people in the streets were doing — and then finding out. Like I was a part of the radical Occupy movement, overcoming strategic obstacles and pressing the attack. Like it was undeniable to ALL those watching that we were “occupying public space” both defiantly and successfully. Like we were reaching out to and growing our numbers among those unsatisfied with signing another petition, or getting another permit, or marching in a GODDAMN, FUCKING CIRCLE IN THE ONLY PLACE IN TOWN DEEMED SAFE!

It made me feel like I was putting my ass on the line, just like the people I was aiming to be “In solidarity with” were doing, every night.

Marching in NYC It made the blisters worth it, the rain fun, and the effort required invisible. Most nights I had a 50 pound pack on, and hardly felt it.

Monday night, back home in Portland, my body longing to be in solidarity with everyone in Quebec: Red square, pan, ready to go…

Without an outlet, it was only my pan that felt like 50 pounds.

Not surprisingly, I hear the nightly solidarity march in NYC is getting bigger each week.

I love my home occupy, and I love it the most when we’re in the streets. Nobody should have to ask an occupy, “Who are you with?”

Money for jobs and ed-u-ca-tion,
not for war and ex-ploi-ta-tion!

We don’t ask, we occupy.

See you in the streets…