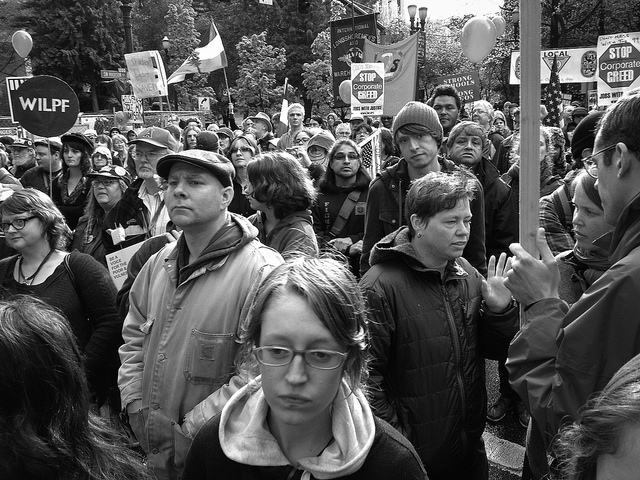 This article originally appeared at Truthdig.

In every conflict, insurgency, uprising and revolution I have covered as a foreign correspondent, the power elite used periods of dormancy, lulls and setbacks to write off the opposition. This is why obituaries for the Occupy movement are in vogue. And this is why the next groundswell of popular protest—and there will be one—will be labeled as “unexpected,” a “shock” and a “surprise.” The television pundits and talking heads, the columnists and academics who declare the movement dead are as out of touch with reality now as they were on Sept. 17 when New York City’s Zuccotti Park was occupied. Nothing this movement does will ever be seen by them as a success. Nothing it does will ever be good enough. Nothing, short of its dissolution and the funneling of its energy back into the political system, will be considered beneficial.

Those who have the largest megaphones in our corporate state serve the very systems of power we are seeking to topple. They encourage us, whether on Fox or MSNBC, to debate inanities, trivia, gossip or the personal narratives of candidates. They seek to channel legitimate outrage and direct it into the black hole of corporate politics. They spin these silly, useless stories from the “left” or the “right” while ignoring the egregious assault by corporate power on the citizenry, an assault enabled by the Democrats and the Republicans. Don’t waste time watching or listening. They exist to confuse and demoralize you.

The engine of all protest movements rests, finally, not in the hands of the protesters but the ruling class. If the ruling class responds rationally to the grievances and injustices that drive people into the streets, as it did during the New Deal, if it institutes jobs programs for the poor and the young, a prolongation of unemployment benefits (which hundreds of thousands of Americans have just lost), improved Medicare for all, infrastructure projects, a moratorium on foreclosures and bank repossessions, and a forgiveness of student debt, then a mass movement can be diluted. Under a rational ruling class, one that responds to the demands of the citizenry, the energy in the street can be channeled back into the mainstream. But once the system calcifies as a servant of the interests of the corporate elites, as has happened in the United States, formal political power thwarts justice rather than advances it.

Our dying corporate class, corrupt, engorged on obscene profits and indifferent to human suffering, is the guarantee that the mass movement will expand and flourish. No one knows when. No one knows how. The future movement may not resemble Occupy. It may not even bear the name Occupy. But it will come. I have seen this before. And we should use this time to prepare, to educate ourselves about the best ways to fight back, to learn from our mistakes, as many Occupiers are doing in New York, Washington, D.C., Philadelphia and other cities. There are dark and turbulent days ahead. There are powerful and frightening forces of hate, backed by corporate money, that will seek to hijack public rage and frustration to create a culture of fear. It is not certain we will win. But it is certain this is not over.

The physical eradication of the encampments and efforts by the corporate state to disrupt the movement through surveillance, entrapment, intimidation and infiltration have knocked many off balance. That was the intent. But there continue to be important pockets of resistance. These enclaves will provide fertile ground and direction once mass protests return. It is imperative that, no matter how dispirited we may become, we resist being lured into the dead game of electoral politics.

“The recent election in Wisconsin shows why Occupy should stay out of the elections,” Zeese said. “Many of the people who organized the Wisconsin occupation of the Capitol building became involved in the recall. First, they spent a lot of time and money collecting more than 1 million signatures. Second, they got involved in the primary where the Democrats picked someone who was not very supportive of union rights and who lost to [Gov. Scott] Walker just a couple of years ago. Third, the general election effort was corrupted by billionaire dollars. They lost. Occupy got involved in politics. What did they get? What would they have gotten if they won? They would have gotten a weak, corporate Democrat who in a couple of years would be hated. That would have undermined their credibility and demobilized their movement. Now, they have to restart their resistance movement.

“Would it not have been better if those who organized the occupation of the Capitol continued to organize an independent, mass resistance movement?” Zeese asked. “They already had strong organization in Madison, and in Dane County as well as nearby counties. They could have developed a Montreal-like movement of mass protest that stopped the function of government and built people power. Every time Walker pushed something extreme they could have been out in the streets and in the Legislature disrupting it. They could have organized general and targeted strikes. They would have built their strength. And by the time Walker faced re-election he would have been easily defeated.

“Elections are something that Occupy needs to continue to avoid,” Zeese said. “The Obama-Romney debate is not a discussion of the concerns of the American people. Obama sometimes uses Occupy language, but he puts forth virtually no job creation, nothing to end the wealth divide and no real tax reform. On tax reform, the Buffett rule—that the secretary should pay the same tax rate as the boss—is totally insufficient. We should be debating whether to go back to the Eisenhower tax rates of 91 percent, the Nixon tax rate of 70 percent or the Reagan tax rate of 50 percent for the top income earners—not whether secretaries and CEOs should be taxed at the same rate!”

The Occupy movement is not finally about occupying. It is, as Zeese points out, about shifting power from the 1 percent to the 99 percent. It is a tactic. And tactics evolve and change. The freedom rides, the sit-ins at segregated lunch counters, the marches in Birmingham and the Montgomery bus boycott were tactics used in the civil rights movement. And just as the civil rights movement often borrowed tactics used by the old Communist Party, which long fought segregation in the South, the Occupy movement, as Zeese points out, draws on earlier protests against global trade agreements and the worldwide protests over the invasion of Iraq. Each was, like the Occupy movement, a global response. And this is a global movement.

We live in a period of history the Canadian philosopher John Ralston Saul calls an interregnum, a period when we are enveloped in what he calls “a vacuum of economic thought,” a period when the reigning ideology, although it no longer corresponds to reality, has yet to be replaced with ideas that respond to the crisis engendered by the collapse of globalization. And the formulation of ideas, which are always at first the purview of a small, marginalized minority, is one of the fundamental tasks of the movement. It is as important to think about how we will live and to begin to reconfigure our lives as it is to resist.

Occupy has organized some significant actions, including the May Day protests, the NATO protest in Chicago, an Occupy G8 summit and G-8 protests in Thurmont and Frederick, Md. There are a number of ongoing actions—Occupy Our Homes, Occupy Faith, Occupy the Criminal Justice System, Occupy University, the Occupy Caravan—that protect the embers of revolt. Last week when Jamie Dimon, the CEO of JPMorgan Chase, testified before a U.S. Senate committee, he was confronted by Occupy protesters, including Deborah Harris, who lost her home in a JPMorgan foreclosure. But you will hear little if anything about these actions on cable television or in The Washington Post. Such acts of resistance get covered almost entirely in the alternative media, such as The Occupied Wall Street Journal and the Occupy Page of The Real News.

“Our job is to build pockets of resistance so that when the flash point arrives, people will have a place to go,” Zeese said. “Our job is to stand for transformation, shifting power from concentrated wealth to the people. As long as we keep annunciating and fighting for this, whether we are talking about health care, finance, empire, housing, we will succeed.

“We will only accomplish this by becoming a mass movement,” he said. “It will not work if we become a fringe movement. Mass movements have to be diverse. If you build a movement around one ethnic group, or one class group, it is easier for the power structure and the police to figure out what we will do next. With diversity you get creativity of tactics. And creativity of tactics is critical to our success. With diversity you bring to the movement different histories, different ideas, different identities, different experiences and different forms of nonviolent tactics.

“The object is to shift people from the power structure to our side, whether it is media, business, youth, labor or police,” he went on. “We must break the enforcement structure. In the book ‘Why Civil Resistance Works’, a review of resistance efforts over the last 100 years, breaking the enforcement structure, which almost always comes through nonviolent civil disobedience, increases your chances of success by 60 percent. We need to divide the police. This is critical. And only a mass movement that is nonviolent and diverse, that draws on all segments of society, has any hope of achieving this. If we can build that, we can win.”

2 comments for “Occupy Will Be Back”