Story and photos by Paul Cone, with additional reporting by Jackie Miller.

Occupy Portland defendants waded through another hearing Monday afternoon in Judge Cheryl Albrecht’s Multnomah County court, with many arguments made, but no cases dismissed or trial dates set.  Highlights of the day included a defense motion by attorney Pete Castleberry to challenge the validity of charges, and the court continued the discussion that began in previous proceedings about the long-awaited discovery materials from the Portland Police Bureau. The PPB was ordered by the court to provide all discovery materials by June 18, but failed to meet that deadline and reportedly said today that it will be turned over by June 27

Castleberry cited a 2009 Ninth Circuit Court case from Long Beach, California, where that court ruled that First Amendment protection is highest when individuals are engaged in political speech in public city parks.  Calling Occupy Portland a “perfect storm of First Amendment protection”, Castleberry gave a hypothetical (and somewhat humorous) example of how Parks Commissioner Nick Fish would allow and promote certain events, such as a Siberian throat singing concert, but not allow other events, essentially arguing that the City chooses to put forth views that it appreciates and suppress ones that it doesn’t, and that to do so is a constitutional violation.

Castleberry further argued that the City of Portland ordinance that allows one officer to close a park is “sweeping discretion under a vague standard” of what a “a public health and safety threat” is, and that an officer could just say “I think things would be safer if we just didn’t have these people here because people are getting rowdy” and close the park.  As part of his argument Castleberry also put forth an exhibit titled “Heightened First Amendment Protection” which illustrated the Ninth Circuit Court case, referring to it as “spheres of protection”. 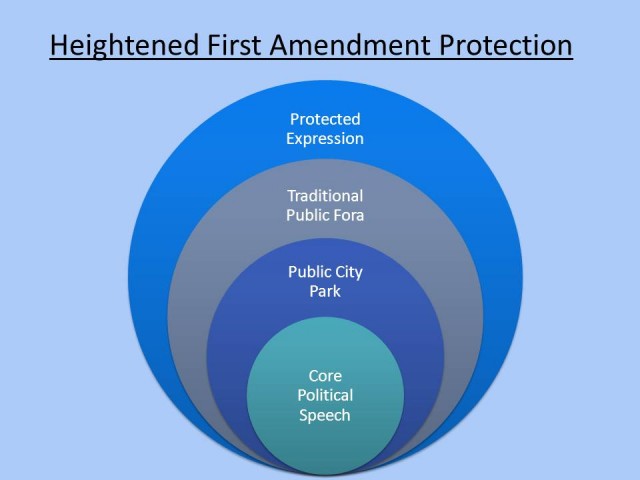 A visual representation of the court’s analysis in Long Beach Area Peace Network v. City of Long Beach, 574 F.3d 1011, 1022 (9th Cir. 2009). The basic idea is that First Amendment protection is highest when individuals are engaged in political speech in public city parks.

Next defense attorney Troy Pickard took the stand and explained how he had contacted deputy district attorney Brian Lowney in an attempt to get access to the video recordings made by the Portland Police Bureau of the protests and arrests.  Pickard testified that he emailed Lowney several times, and called several times, but never received a response.  Lowney responded that Pickard was not a “representing” attorney in all of the arrest incidents, but that “we probably could have gotten back to him sooner.”

Lowney then turned to the defendants and explained the process to get the discovery, which is to either make an appointment with his office to view video for free, or pay $35 per disc to get a copy of it on DVD.  At this point things got a little heated in the room and many verbally complained about having to pay to receive video, and one person was excluded from the courtroom.  A few minutes later Lowney clarified that “it’s actually $31 — not $35”, at which point one defendant said out loud, “Oh, well that makes it affordable.”

Defense attorney Troy Pickard testifies about lack of response from the District Attorney to requests for police video.

Defense attorney Leland Berger further argued that he thought it was the intent of the district attorney to make it difficult for the defendants to get access to the video. Court defense attorney Bear Wilner-Nugent said, “I’m very disappointed in the discovery procedures, because I think they’re grossly inadequate.”

Judge Albrecht then said, “I would like to get to trial sometime soon,” and talked about a procedure for setting trial dates.  Albrecht anticipates setting trial in groups by arrest date, such as 3rd & Main, Jamison Square, eviction, January 25, and Col. Summers Park.  However, before trial dates can be set, she will need to rule on today’s constitutional rights motion and on a previously argued motion.

Further proceedings will be held in Judge Albrecht’s courtroom on Friday, July 6, at 1:30 p.m.  Room 602 will not be available, so the room is to be determined.  Albrecht said the purpose will be further discussion on the discovery, and determining what additional motions may need to be filed.  She hopes to set trial dates on that day.

If you are a defendant who cannot attend the hearing on July 6 and you have an attorney, be sure to let your attorney know of any dates you will be unavailable for trial. If you can’t attend and do not have an attorney, contact the ELK hotline for guidance at 503-902-5340. 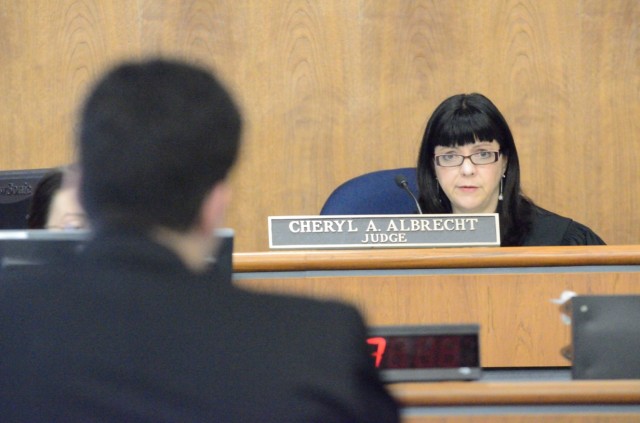 5 comments for “Occupiers Continue Their Tangle With The State”