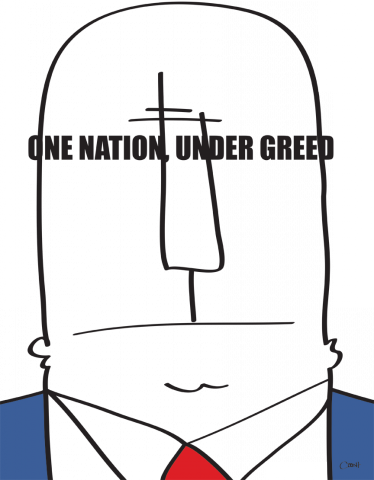 There has been much recent talk about the impact of money on politics, especially in the wake of the Citizens United ruling that ratcheted up the role of corporate money in political campaigns. Organized labor was quick to blame this ruling for its defeat in Wisconsin. Many assume that the relationship of money to politics is like a law of nature; the more money one has, the more political power one can wield.

There is some truth to this claim. In a recent editorial (“Money Rules,” April 19, 2012), The New York Times noted that “big donors to Mr. Obama and the Democratic Party are far more likely to be welcomed at the White House than those who gave smaller gifts.” The editorial continued: “And, despite decades of money abuses and scandal, neither presidential candidate [Obama nor Romney] has shown any interest in reforming the system.”

Of course, politicians always deny that there is any connection between campaign donations and their policy decisions, swearing that the strong statistical correlation between the two is entirely coincidental. Yet, given their fixation on “the bottom line,” it is inconceivable that corporations would continue to donate billions of dollars a year to politicians if they did not expect to get a “return” on their investment.

It should not be surprising that money and power tend to converge. Capitalism is not just an economic system that places profit above all other concerns–it breeds a culture in which money is the “bottom line” in every transaction. Money opens the doors to the best education available, to quality health care and spacious homes in crime-free neighborhoods, not to mention “attractive mates.” Money buys leisure time and can allow people to avoid work altogether. Money commands respect.

Having lost billions of dollars in risky investments, Jamie Dimon of JP Morgan Chase was bombarded with obsequious questions when he appeared before a Congressional committee that probably would have preferred to solicit his investment advice.
And although not a sufficient condition, money is a necessary condition(and usually the determining factor) for winning political elections. Finally, capital places individuals in perennial competition with one another and weakens social and community ties, leaving only money to fill the void.

Within capitalism, the more money and power one has, the easier it is to acquire still more money and power. When the billionaire Warren Buffett recently invested $5 billion dollars with Goldman Sachs, he was guaranteed a 10 percent rate of return, meaning he will make $500 million a year without lifting a finger. Even worse, much of this money is acquired simply by the rich taking from everyone else.

In their recent book, “Winner-Take-All Politics: How Washington Made the Rich Richer – and Turned Its Back on the Middle Class,” political scientists Jacob Hacker and Paul Pierson argue that much of the new wealth enjoyed by the rich has resulted from their success at lobbying politicians to change tax laws and business regulations to their advantage. Hence, when left to its own devices, capitalism tends to concentrate money and power in the hands of a few, allowing inequalities in wealth to grow ever greater.

Unions were created to combat these tendencies and to protect workers from their employers’ avid pursuit of money.  While employers want to maximize profits, workers want enough to pay their bills and lead a comfortable life. Thus, there is a power struggle over what portion of company profit goes toward worker wages and benefits and how much to the employer’s pocket. Given that owners have far more money at their disposal than workers, one might assume that they hold the reins of power and can dictate the outcome.

But there is a limit to the role that money can play. Unions operate on unique principles that provide the potential for a far greater exercise of power than what employers can command– even with far more money. Rejecting competition, workers organized unions on the principle of solidarity. It was a logical course for workers to pursue: while an individual worker is powerless in the face of a domineering employer, and while workers who are competing against one another are collectively powerless in relation to the employer, workers quickly learned that power shifts in their direction when they join together and engage in coordinated action. If one person tries to conduct a strike, that person is simply fired. When the entire workforce conducts a strike, they can bring business to a grinding halt and become a force to contend with.

Because of this need to stand together and work for a common goal, unions generate their own culture. When they have successfully struggled together, camaraderie develops among the union members. They take care of one another, cover for each other, and form lifetime friendships in much the same way as soldiers who have endured battles together.

For this reason, union struggles can change the entire political and cultural landscape. When workers decide to take a stand in order to break the cycle of growing inequalities in wealth, when they fight for a decent standard of living that includes a living wage, job security, health care, access to quality education, home ownership, and retirement with dignity–not just for themselves but for everyone–they inspire all working people and create the possibility of a massive social movement that has the potential to forge historic changes, as was done in the 1930s.

People are inspired by movements that aim at creating a better world for everyone, where those who need help are given what they need, where people contribute according to their ability, and where no one advances at the expense of others. This more ennobled sense of humanity engenders inspiration in a way that money never can. And people are inspired when workers wage a real fight, as opposed to the current ever so prevalent practice of organizing fake fights that involve porous picket lines that no one takes seriously, or demonstrations of several hundred workers when the workforce includes thousands.

When these social movements achieve momentum, money no longer plays the deciding role. People shed their disconnected isolation, become knowledgeable on issues, engage with one another, and derive strength in their numbers. Time and again massive numbers of people demonstrating for a common goal has proved to be a prevailing factor in creating change.

Unfortunately, at this time in history, organized labor seems content to rely on money for power. Unions spend hundreds of millions of dollars trying to elect Democrats to office, leaving the vast reservoir of membership power untapped. Of course, corporations have even more money at their disposal and give generously to both political parties to hedge their bets, easily outspending labor in the process. When it comes to money, simple arithmetic is all that counts: because corporations give far more than labor, they get far more than labor, and the inequalities in wealth continue to grow.

As a result of current union orientation toward the Democratic Party, one must look long and hard for compelling examples, aside from the 1930s, when unions put up a valiant struggle. In 1958 the unions relied on themselves instead of the Democrats, mobilizing their members to defeat a right to work law, and won a stunning victory. The local newspaper reported: “Ohio voters rejected the ‘right-to-work’ proposal by the biggest margin ever recorded on an issue on the ballot in the state’s history.”

More recently, United Electrical workers conducted a sit-down strike in a Chicago windows and doors factory, demanding their severance pay from the Bank of America. Because of the outpouring of public support from across the country, Bank of America, one of the most powerful corporations in the world, backed down, and the workers won their demands.

When it is a question of the efficacy of money in politics and workers fail to put up a fight, money prevails. The moral is: money counts – but only if we let it.

Ann Robertson is a Lecturer at San Francisco State University and a member of the California Faculty Association. Bill Leumer is a member of the International Brotherhood of Teamsters, Local 853 (ret.). Both are writers for Workers Action and may be reached at [email protected].