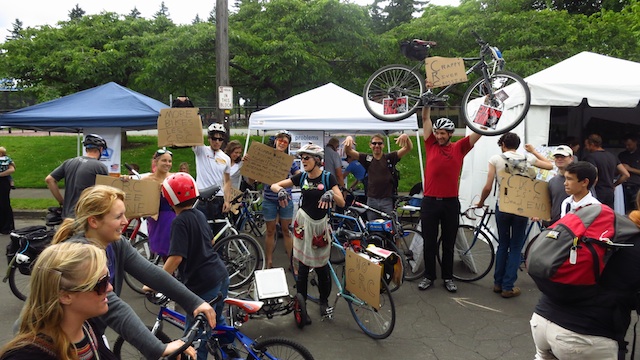 For those unfamiliar, Portland Sunday Parkways is a 9 mile loop of streets closed to automobile traffic that happens once a month in Portland’s summer, and allows people access to the streets in their community without fear of being injured or killed by rapidly moving machines, just as human beings did for thousands of years prior to the industrial revolution. At Sunday Parkways people smile, laugh, share music, meet new friends, exercise, explore each others’ front yard flower gardens, and generally build a stronger connection with their community by sharing a safe, common space. In stark contrast to Parkways is a place purely for vehicles emitting toxic chemicals with humans locked inside strapped to a chair, unable to communicate with anything besides a loud air horn, racing over billions of dollars of dull, depressing concrete – this will be the reality of North Portland’s future if the Columbia River Crossing is allowed to be constructed.

Portland has a proud history of rejecting and dismantling this kind of dehumanizing transportation paradigm. In the 1960′s Portland was planning to allow freeway fetishist Robert Moses to turn quiet SE Division street into a 8 lane monstrosity called the Mt. Hood Freeway, and it would have completely cut this peaceful community in half. Fortunately, concerned citizens got organized, and with enough push-back the nightmare ended, the Mt. Hood Freeway was defeated, and the neighborhood remains safely intact. The money that would have gone to this freeway was instead used to restart light rail in our region.

The Columbia River Crossing is increasingly being referred to as the Mt. Hood Freeway or our generation, only far larger, costlier, and unnecessary. The CRC is to replace the existing 6 lane I-5 bridge that has a projected 50 to 60 years left in it’s life span, and to widen the current freeway for miles in either direction. While congestion is an issue, most responsible planners and engineers concede that adding a simple connector bridge to Hayden island or repositioning one of the ramps leading to the bridge would eliminate the problem for a fraction of the cost to taxpayers.

More than ever, it is understood that building more lanes for cars does not ease congestion, it actually encourages more vehicles to take the route. Freeways actually incentivize gridlock, and the people pushing for the CRC know this. So with this bridge being so unaffordable, and with so many cheaper solutions available, who in their right mind would want such a project? A quick look at the CRC ‘supporters’ page shows many trade unions who would enjoy short term employment, but more sinister are the appearance of the names Bank of America, the Portland Business Alliance, Portland General Electric, Boeing, NW Natural, Albina Fuel, and more car-part and tire manufacturers than you’ll care to remember, all of whom stand to rake in profits via the construction process, leaving the community to foot the bill for the CRC’s future maintenance, community health impacts, and property value degradation.

PDX Bike Swarm met up in Kenton park surrounded by children playing while their parents rested nearby, bikes scattered everywhere. We made signs reading: ‘The CRC is a Dead End’, ‘Crappy River Crossing’, ‘More Bikes, Less CRC’ and lashed them to our frames. Once all was secure we rolled out. Along the way we waved and smiled to thousands of our fellow riders while reminding them what a destructive waste the CRC would be. Most everyone smiled or waved back, all too familiar with the project being protested. We stopped briefly to chat with some friends at an anti-coal booth, were given free lemonade, and were told of a ride they were planning to protest the possibility of coal trains polluting downtown Portland. They wished us well and we were back on our way. As is common on many rides we’ve done, the ride leader is in charge of the music, which I supplied from my bicycle’s mobile sound system. We’d ride by, people would hear the music, look up, see our signs, wave, smile, love.

We arrived at Peninsula park and took a small detour around the fountain in the middle of the brick rose garden. While exiting, we bumped into mayoral candidate Jefferson Smith, who danced to our music briefly before engaging in hand shaking, smiling, and an acknowledgement of our signs deriding the new freeway, as he is the only candidate to support the idea of not building the CRC at all.

After a brief regrouping we proceeded slowly forward to our final destination; the Columbia River Crossing planning projects’ info booth, or what more accurately could be called their propaganda table. Looking down, I noticed that somebody had already chalked the words “LIES” on the ground with arrows pointing towards their booth. Two staffers were there, regurgitating their worn argument about why the freeway is needed, and how the obvious solution is to spend billions building more lanes. As we rolled up, I turned the music to full volume and the dancing began. Onlookers quickly noticed our signs as we began to chant them aloud, ‘NO CRC! MORE LANES MEANS MORE TRAFFIC!’ The two uniformed staffers were not amused. While we maintained our distance and did not interfere with their booth, one of the staffers confronted us and angrily demanded we move away and turn off the music. We refused, reminding her this was a public street closed off for pedestrian use, we were fully within our rights, and that we as taxpayers were paying the staffers to be here. Then an event volunteer moved in, ordering us to move, even making the claim we were causing bottle-necking on the street, which naturally prompted us to reply, “Just like they’ll be on the CRC with all those new lanes and more cars!” The volunteer apparently failed to notice the row of motor vehicles parked directly behind him on the street taking up far more room than we were. He moved off to get backup. After several more minutes of music, dance and chanting, we dialed the volume down and left the CRC booth in peace. As we walked up the block, a PPB officer on motorcycle rolled by, glaring at our signs.

At this point, the CRC is in limbo. The Coast Guard won’t permit the bridge because they say it will be too low to allow ships to pass under. The residents of Vancouver are refusing a bridge with the tolls needed to fund the project, and with a light rail component that is required to get federal funding. The entire project was recently pushed back another two years for these reasons. Yet every week, thousands of dollars that could have gone towards our schools or our houseless community are being spent on moving forward with the current design, which will cost thousands of MILLIONS of dollars, all as a gift to the wealthiest corporations in our region.

It is said that the federal government does not want to fund a project that does not have popular support, and a recent poll by the Oregonian found that a whopping 63% of residents in our region don’t want a new bridge at all. Despite this, we still have a lumbering zombie of a project that still is sucking up money, while still threatening our community in the process. We need to kill this project. We need to keep reminding our elected representatives that Portland is a place worth caring about because we reject polluting auto-centric transportation. We need to continue public outreach, to keep the CRC in everyone’s mind. We need continue to ride our bikes and raise our voices until the proposed Columbia River Crossing joins the Mt. Hood Freeway as part of Portland’s past. PDX Bike Swarm will continue to do just that.

See you in the streets!

More Photos of our SHUT DOWN the CRC ride.