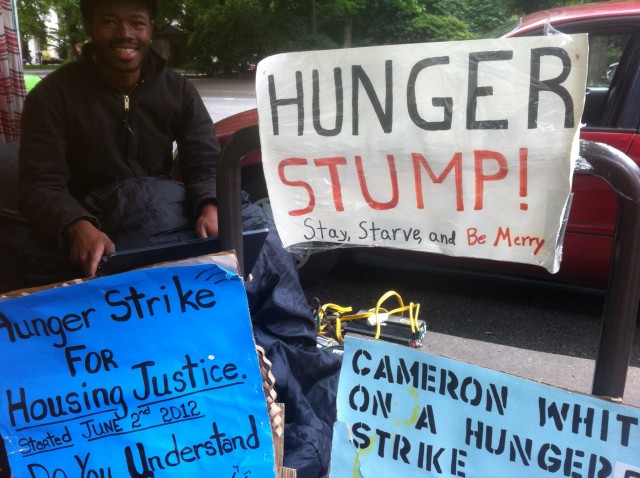 After 30 days of going hungry, a thinner, weaker Cameron Whitten had something to say.

An expectant crowd of some 70 supporters gathered Sunday night in front of city hall to hear him. “I’m ending my hunger strike,” he said, and the crowd applauded.

But after explaining why he’s not satisfied with the response he’s received from politicians on housing issues, Whitten added, “I’m starting a new hunger strike with fewer calories and no juice.” The crowd, some of whom had rolled out their sleeping gear to spend the night with him on the sidewalk, gasped then applauded.

The gathering was a combination of celebration for Whitten’s tenacity and vigil for housing justice.

In his speech, haltingly read in the poor lighting of a flashlight, Whitten described the lack of affordable housing in Portland as a crisis. “There are too many people in Portland whose basic needs are not being met,” he said. “The politicians aren’t taking this serious enough.”

He revised his agenda by dropping his pleas for a housing levy and an eviction moratorium, and by adding three new ones:

1. Creation of a task force composed of concerned citizens and non-profit organizations to find better ways to provide basic city services to those without.
2. Initiation of a dialogue between city officials and representatives of the houseless community to find an alternative to the current ban on camping in the city.
3. Location of a city site capable of providing shelter and basic services for 300 persons.

When asked by a reporter why he tells others to “stay healthy” and yet is not caring for his own health, he said, “Any loss I might suffer in physical health is made up for by my gain in spiritual growth.”

His new “diet,” which gives him about 100 calories per day, is just water, essential salts and minerals, and some protein powder. Amazingly, he still has enough energy to attend two English classes at nearby Portland State University.

Billy Scheibner, Whitten’s young fellow hunger striker, who was on day 18 of a water-only fast, was taken to the emergency room at Oregon Health Sciences Hospital Saturday evening after a doctor checked him and, alarmed at Billy’s condition, called 911.

Billy didn’t want to go, but finally consented to riding in the ambulance. After a blood test and an EKG it was determined he was low on sodium and potassium but in no immediate danger. An intravenous treatment was prescribed, but Billy refused and was returned by friends to his post alongside Whitten.

When asked how long his hunger strike will last, Whitten shrugged and said, “There is no definite time.” 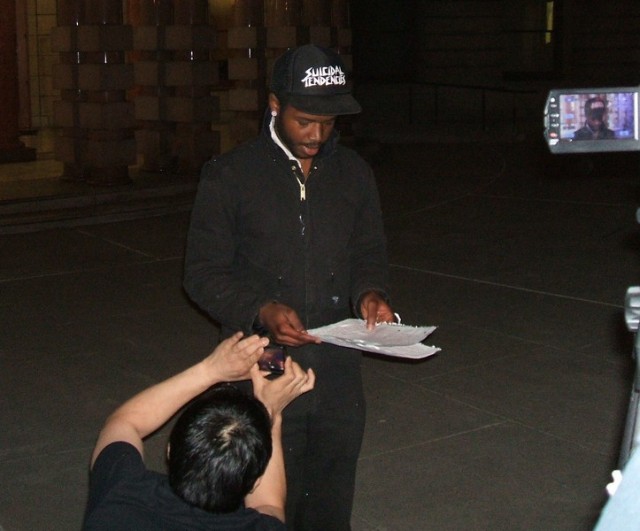