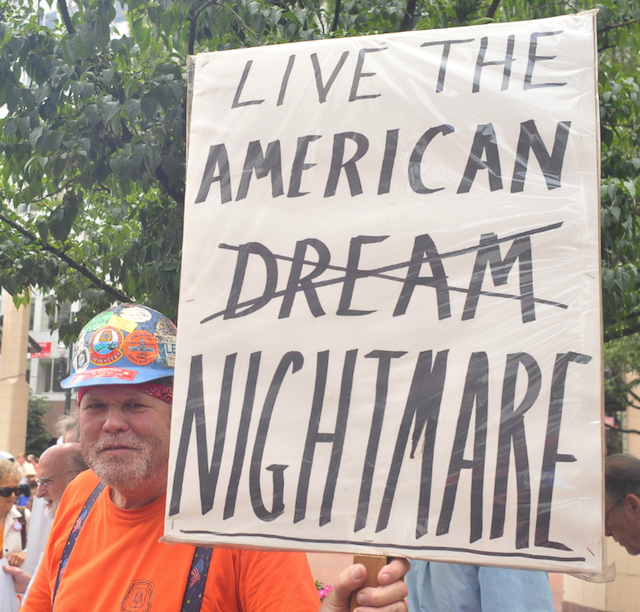 Another year, another so-called free trade agreement. The North American Free Trade Agreement (NAFTA) is almost 20, while its younger sibling, the Central America Free Trade Agreement (CAFTA) is nearing seven years old. They sure grow up fast, don’t they? And now coming down the pike is the Trans-Pacific Partnership (TPP), an arranged marriage between the United States, Australia, Brunei, Chile, Malaysia, New Zealand, Peru, Singapore and Vietnam. In the future, this coupling could be extended to all Pacific Rim nations.

On July 2, in coordination with Pacific Rim activists supporting people’s rights over corporate profits, over 60 people gathered in Pioneer Square for a rally against the TPP. From Pioneer Square, protesters visited local branches of Verizon, FedEx, and Wal-Mart–all TPP supporters–handing out informational flyers to passersby. At the SW Broadway Verizon branch, the manager pulled the blinds and locked the doors, while Wal-Mart security called the Portland Police, who showed up just as the rally ended.

As with NAFTA and CAFTA, the TPP is neither an agreement, nor, to use its lingo, a partnership–at least as it relates to the citizens of the affected countries. Like its predecessors, it is an investors’ rights agreement, negotiated with almost no citizen input, that allows the free flow of capital in pursuit of low worker wages, leaving corporations to maximize profits with little or no regard to workers’ rights, environmental degradation, and any other “externalities”.  Unlike its ancestors, the TPP has not been open to public scrutiny.

The 13th major round of TPP negotiations–and maybe the last according to Elizabeth Swager of the Oregon Fair Trade Campaign (ORFTC)–is being held in San Diego from July 2-10. “There are approximately 600 corporate lobbyists who have access to both the negotiating texts and the ear of the negotiators,” Swager said, “while the people who will be most affected by this massive free trade agreement are barred from viewing the text.” 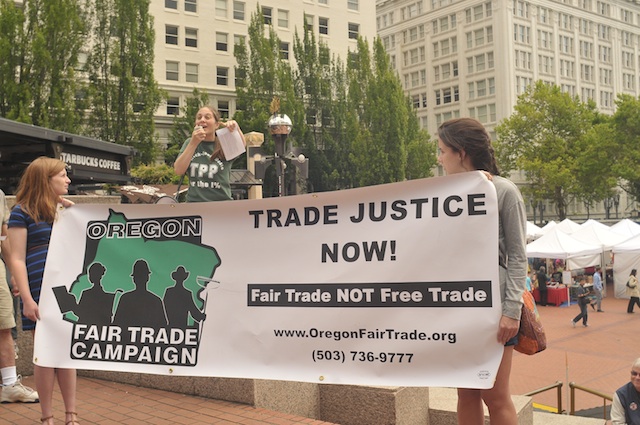 “In response,” Swager said, “labor, environmental, human rights activists and Occupiers across the country are organizing actions to drag the TPP out of the shadows and demand negotiators expose to the public what they are negotiating in our name. We need transparency to prevent the next corporate power grab. Here in Oregon, we are linking up with local labor campaigns to target corporations doing wrong by workers in our community and pushing for the Trans-Pacific Partnership as a tool to maximize profits for the 1% at the expense of the 99%.”

The rhetoric surrounding these so-called free trade agreements revolves around the rising tide that lifts all boats, bringing prosperity to all. It seems, however, that yachts are the only boats in the free trade harbor. Since the bi-partisan Democratic and Republican success of enacting NAFTA in 1994, over 2.5 million US jobs have been lost to it and other trade accords. Many of these jobs are relocated to countries with lower wages and governments that violently suppress those who speak out for better working conditions.

The TPP appears poised to continue the trend that demands the sacrifice of national sovereignty to promote corporate greed. According to some of the leaked text, most of the countries discussing the TPP are pushing for language that grants transnational corporations the power to challenge any environmental or consumer safety protections that hurt their profits as “regulatory takings” in international tribunals that circumvent domestic judicial systems. According to Swager, not only does such language allow corporations to threaten existing environmental protections and future climate change legislation, it also spells more drilling, logging, and mining–regardless of the wishes of local communities.

“Already, under existing trade policy we have seen part of the Clean Air Act, Endangered Species Act and Marine Mammal Protection Act rolled back,” Swager said. “If the TPP moves forward, it will threaten much needed policies intended to combat climate change. It will also encourage ‘rip-and-ship’ resource extraction in each of the countries involved.”

The TPP would also likely continue the dumping of US subsidized grains on other countries, while allowing the import of cheaper and often less regulated fruits, vegetables, and seafood. Since NAFTA, the result of this policy has been to consolidate food in the hands of fewer and fewer corporate conglomerates, such as Cargill and Bunge, while driving family and subsistence farmers off the land and leaving the public at the mercy of unpredictable fluctuations in food prices.

It also appears that US negotiators are pushing for agreements that would benefit the financial sector, with a blind eye to the financial near-meltdown of 2008 that spun the country into economic depression. Those devastating results continue piling up, and, according to many economists, will lead to another crisis, due to Wall Street not being held to meaningful account for the havoc it has wrought.

Despite this, the US is pushing for Wall Street-based firms to have greater access to financial service markets abroad, while limiting the ability of governments to regulate banks, hedge funds, and insurance companies. Among these provisions would be prohibitions against the size of financial institutions; firewalls between types of financial institutions; bans on specific financial products; and capital controls. In other words, everything that led to the 2008 financial meltdown–banks “too big to fail”; no barrier between regular bank accounts and hedge funds due to the Gramm-Leach-Bliley Act that effectively repealed the Glass Steagall Act; the sale of toxic assets; and zero control over how much money flows in and out of a country–would be allowed to continue on a grander stage with virtually no oversight.

Considering the leaked contents of the TPP negotiations, the intense secrecy surrounding them should come as no surprise. “After the immense public outrage at the corporate bailouts since the economic crisis, it isn’t surprising that trade negotiators want to keep the TPP negotiations a secret,” Swager said. “If people knew this trade agreement was going to limit financial regulations, such as those that prevent ‘too big to fail,’ we would stop it in its tracks.”

“This is a trade deal we can defeat, if people start to get educated and mobilized now. Our fight isn’t easy,” Swager said. “We’re up against the most powerful economic interests in the world. But if we want family-wage jobs in this state for ourselves and our kids and grandkids, this is a fight we have to win.”

“And as bad as things have been, we are making progress. In the late 1990s, corporations were pushing the World Trade Organization. We shut down their agenda in Seattle, and they haven’t gotten back on track since. Then they scaled back a bit and said, ‘Can we just do it in the western hemisphere with the Free Trade Area of the Americas?’ We defeated that, and we can defeat the TPP.”

Interested in promoting trade agreements that value human rights over property rights?  Check out the webpage for the Oregon Fair Trade Campaign (http://www.citizenstrade.org/ctc/oregon/). 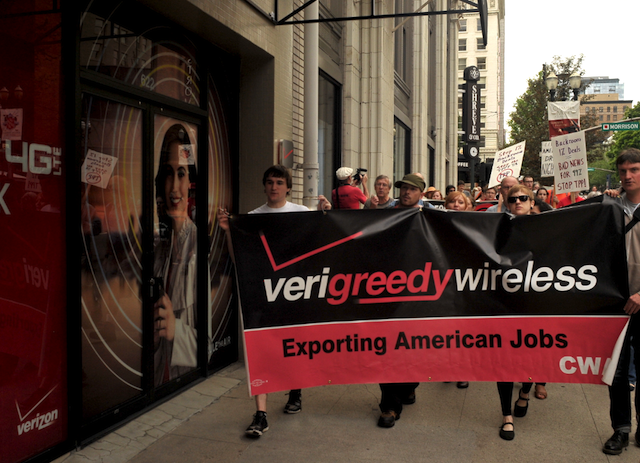