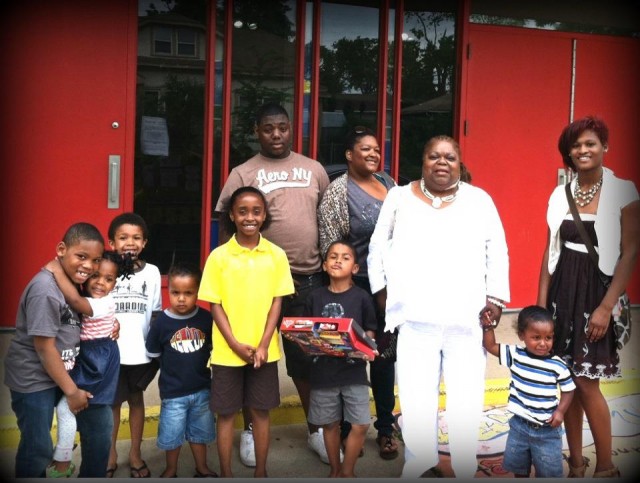 Ruby Brown with members of her family in front of the North Minneapolis church where Ruby serves as a deacon.

This story orginally appeared on the website for Occupy Homes MN (Minnesota).

By Susan Kukichi and Anthony Newby

After a five-year battle over now-illegal lending practices, a bank error that dropped her from a loan modification program, and a campaign with Occupy Homes MN, north Minneapolis homeowner Ruby Brown has received a mortgage renegotiation from Bank of America, just days before her home was to be auctioned off.

“This is an incredible victory for Ruby, who has been in the struggle for so long. It’s also something that can and should happen for everyone facing the loss of a home right now,” said Susan Kikuchi, an organizer with Occupy Homes MN.

Ruby, a hairdresser whose home of 17 years is the center of her family life, fell into foreclosure  after years of struggling with inflated payments in an adjustable rate mortgage, a predatory lending practice which is now illegal. She eventually received a trial modification and complied with its requirements for 12 months, but was dropped from the program anyway.

As though her struggle with the banks weren’t enough, Ruby’s home was damaged by the tornado that swept through North Minneapolis in 2011. Despite the uncertain future of her home, she threw herself into the project of repairing the home, a pillar for her family and a symbol of her community’s resilience despite disaster.

“Had it not been for my faith, I could not have made it through,” said Ruby, a deacon in her north Minneapolis church. She found herself relying on comforting words from a Muslim friend: “God is bigger than Bank of America.”

When Ruby began working with Occupy Homes MN and Neighborhoods Organizing for Change 6 months ago, she felt her shame dissolve. “It generated a fight in me,” she said. “I didn’t realize there were so many people in the same situation, that it wasn’t just me.”

Last week Occupy Homes MN held a week of action demanding that Bank of America renegotiate with the “Minnesota 5,” five homeowners who can all afford to pay their mortgage. The week of action included a call-in drive, a meeting with an executive in Apple Valley, and a banner drop over a busy Minneapolis intersection.

On Friday, the last day of the week of action, Ruby learned that her sheriff sale, scheduled just a few days away, had been canceled, and that her loan modification had been approved. “My first reaction wasn’t to laugh, jump, and shout–I had an outburst of tears of relief that justice had prevailed,” said Ruby. “I felt both joy and pain, because everyone should get this deal.”

North Minneapolis, where Ruby lives with her family, was targeted by large financial institutions with predatory lending practices and has suffered more from the foreclosure crisis than any other area of Minnesota. In some neighborhoods more than half of all homes have been foreclosed since 2007.

Ruby’s family is the fourth to win a modification from the bank to save their home with support from their community and Occupy Homes MN, after Bobby Hull, Monique White, and Colleen Mckee Espinosa.