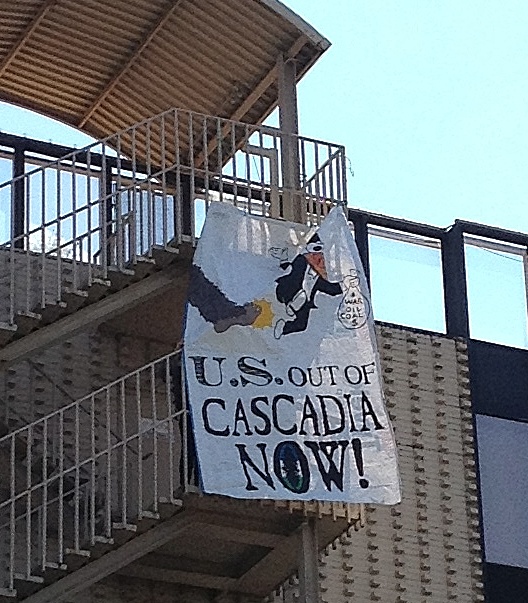 Barack Obama has failed to halt any wars and has greatly expanded presidential power, despite promises to carry out different policies than his predecessor George W. Bush.

At noon today, several members of the Cascadia Now! Movement gathered across from Obama’s Portland fundraiser event and dropped a large banner depicting a Sasquatch foot kicking out a Monopoly man holding a money bag, with the words “WAR”, “OIL”, and “COAL” written across it.

Those in the Cascadia Now! Movement are interested in strengthening local community economies through sustainable and equitable means, not through the continued practices of war for oil and climate-catastrophic coal mining. Bioregionalism is a new phenomenon rising from the peoples’ need to withdraw support from their war-obsessed governments, protect watersheds and unify and strengthen communities against attacks from multinational corporations.

Obama has carried out drone wars against Pakistan, Yemen and Somalia that have resulted in the deaths of thousands of civilians. Obama considers any ‘military-age’ male at a target site to be a combatant, thus obscuring any data on civilian casualties. He personally supervises a ‘kill list’ that includes a 16-year-old girl and has ordered the murder of three American citizens in Yemen, including a 16-year-old boy. Obama has greatly expanded the war in Afghanistan, nearly doubling American deaths since he has taken office. He waged war against Libya without Congressional approval. Through his actions he has proven to be no better – if not worse – than his predecessor.

When the war for oil is over, the war for fresh water will just be getting started. Arranging ourselves into Bioregions, which are based on watersheds, to know and protect our fresh water sources is the most strategic plan possible for the coming times ahead. Cascadians believe fresh drinking water is a human right for everyone, not just for those who can afford it. We in Cascadia look forward to being a model of resilience and ecological sanity, setting an example for the rest of Earth’s human communities to learn from. But first we must begin by disengaging from the short-sighted economic practices of the United States.

Cascadians are uniting to create a different way forward, one that does not support endless overseas wars. They support Bioregional independence for Cascadia.