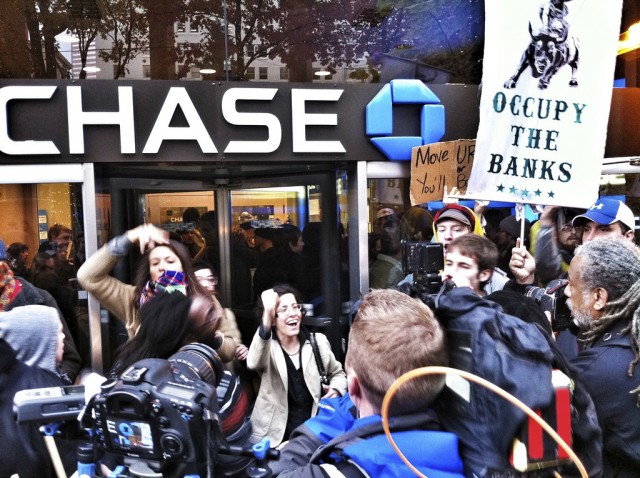 I’ve operated the small artisan Kokopelli Farm, which grows mainly berries, for the last 20 years. It is located a couple of miles from small-town Sebastopol’s downtown commons in Northern California. Our town has fewer than 8,000 people and is the economic center of what is called the West County of the coastal Sonoma County. We historically have had a vibrant local economy, which is now being threatened by the desires of big businesses to further concentrate their enormous power and drain the agrarian wealth out of the land and people.

If the United States’ largest bank, Chase, and its 18th largest corporation, CVS Pharmacy, are permitted to anchor themselves at the center of town, as they propose, it would hurt my farm and other local businesses. This would damage our town and our semi-rural county of nearly 500,000 people.

Fortunately, Sebastopol’s Design Review Board has rejected the Chase/CVS development several times, the latest being by a 4 to 1 vote in June. It will now go before the City Council on July 17. Chase and CVS have substantial global power, so they are working behind the scenes to get what they want — more money. They employ various tactics against local businesses and officials. The corner they covet is the most valuable in our town currently on the market.

Chase Bank, which is part of JP Morgan, and its CEO Jamie Dimon have recently received bad publicity for gambling with derivatives and losing $5.8 billion. They have a long history of paying millions in fines for illegal, fraudulent and predatory banking practices. Many consider them loan sharks. Fortunately for us, we have good alternatives because we have many credit unions and local banks in Sebastopol. They deserve our business, which strengthens the local economy.

CVS has also been found guilty and fined millions for criminal practices, including the failure to cleanup toxic materials. The white collar criminal top managers of Chase and CVS should be in jail. They are not there because — like previous robber barons — they have high-paid lawyers, lobbyists and politicians who make the laws that are supposed to regulate them.

Corporations have captured the federal government and even judges, especially the U.S. Supreme Court. Big corporations have successfully concentrated their power in many industries, including financial, pharmaceutical, agribusiness and nuclear energy. They anchor the wealthy 1% and oppress the 99% of people.

CVS utilizes devious ways of depriving local pharmacies of customers. According to GoLocal’s Philip Beard, “My local druggist at Tuttle’s Pharmacy in Santa Rosa has lost a sizable portion of his clientele. All County workers are now covered by a recently adopted County group healthcare policy. The policy only pays for prescribed drugs if they’re bought at CVS.”

Beard added, “So Tuttle’s, a longtime locally owned Sonoma County business that’s paid beaucoup bucks in taxes over the years, is cheated out of a significant part of business because the County — ostensibly to help its employees cover their healthcare needs — awards an exclusive contract to a corporate giant that would like Tuttle’s to go out of business. The people who work there would lose their jobs.”

The owner of another local pharmacy in the West County confirmed the same information. It is losing customers because of the mandatory mail order purchasing of medicine only through CVS. “This model is not a best practice for patients,” he observed. “CVS does not care. Medical outcomes are best when done with face-to-face interaction with the pharmacist. Yet most of the county is going to such mail-orders.”

My small business was damaged when a big supermarket chain bought a small, local business. For many years Sebastopol’s Food for Thought was the main purchaser of my berries. I could supply them the quantity they needed at their one store. But once Texas-based Whole Foods bought them, they wanted me to supply berries for all their regional stores. Since I was unable to do that, they began purchasing their berries from big businesses located outside Sonoma County. So instead of the money from the financial exchange continuing to circulate among the people within Sonoma County, it now goes to Texas and elsewhere. Studies document that the average morsel of food in the U.S. travels 1,500 miles from field to fork to be eaten. This consumes a huge amount of fossil fuels, which are declining in supply and should be preserved for essential uses.

Fortunately for my business, Laguna Farm has continued to purchase my berries to supply its Community Supported (CSA) customers; I also sell them directly to customers who come to Kokopelli Farm. Another favorable recent development for local growers has been the growth of Terra Sonoma into the Farmers Exchange of Earthly Delights (FEED). It buys directly from local farmers and distributes throughout the San Francisco Bay Area. Its motto is “Feeding you Locally since 1979.” The word “locavore,” which means to source one’s food locally, was invented in Sonoma County, and recently was named the Oxford Dictionary’s new word of the year.

The Spiral Foods Coop has been hard at work organizing and already has hundreds of members, which will give residents more local food options. We need more such cooperatives and fewer huge corporations.

“One person, one vote” is an American tradition. However, the 2010 U.S. Supreme Court’s misnamed “Citizens United” decision declaring that corporations are people has deprived us of that tradition. The way it now works is that one giant corporation can give millions of dollars to candidates and elected officials and thus buy their votes. This includes Supreme Court judges, resulting in the current U.S. Supreme Court having the lowest percentage of confidence by the American people of any court in U.S. history.

The differences between big chains like Chase and CVS and small businesses like Kokopelli Farm and Tuttle’s are essential. Local businesses like ours are what differentiates and puts our small town of Sebastopol on the map as a local, go-to community with character.

Shepherd Bliss operates the artisan Kokopelli Farm, teaches college and can be reached at [email protected]