Report and Photos by Pete Shaw

Williams stated at a press conference this morning that he and Plante would be resisting the grand jury, saying, “We will not cooperate with their investigation. If we appear before the grand jury, we will not answer any questions other than our names. 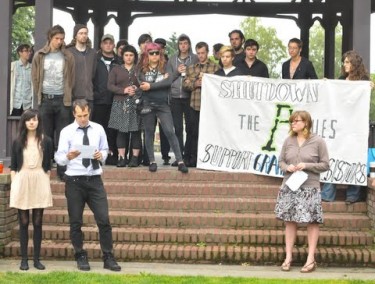 If we are asked additional questions, we will invoke our First, Fourth, and Fifth Amendment rights. Under no circumstances will we talk about other people.”

On July 25th the FBI raided three Portland houses, seizing black clothing, flags, computers, and anarchist literature. FBI spokesperson Beth Anne Steel claimed the raids were part of an investigation into “ongoing violent crime,” but the seizing of paraphernalia associated with anarchists as well as the FBI’s and the US government’s long history of persecuting social movements calls this claim into question. A more detailed look at the raids was earlier reported here.

“This grand jury is a tool of political repression,” continued Williams. “It is attempting to turn individuals against each other by coercing those subpoenaed to testify against their communities. The secret nature of grand jury proceedings creates mistrust and can undermine solidarity.” Full transcript available here.

Chris Agenda, who was among over 30 supporters of Williams, Plante, and their constitutional rights, attending the press conference said, “It’s obvious that the grand jury subpoenas and related investigations are political witch hunts. It’s inspiring to see people openly resisting the grand jury.”

The Committee Against Political Repression (CAPR) is urging supporters of the First Amendment’s right to free association to take part in a national call in day today, August 1st, and demand Jenny A. Durkan, the US Attorney for Washington State cease this grand jury and clearly unlawful investigation.

On Thursday, the day of the grand jury hearings, solidarity rallies will be held throughout the country in support of those resisting the grand jury. The main rally will start at 7:30 AM on the steps of the federal courthouse at 700 Stewart Street in Seattle.

For information on what you can do, including the phone number of US Attorney Jenny A. Durkan, go to: nopoliticalrepression.wordpress.com

3 comments for “Targets of the FBI’s Portland Witch Hunt Speak Out, Urge Action”