“Man has no right to kill his brother.  That he chooses to do so in uniform merely adds the infamy of servitude to the crime of murder.”
~ Percy Shelley

“Damn it feels good to be back in the streets!” somebody shouted.  It might have been me.  After riding a 20-mile loop that began at 9:30 am around Portland to support protesters at three different army recruitment offices, PDX Bike Swarm was doing what it loves most, leading a march in the public streets.

After months spent without marching of any kind we were finally back where we belong, calling for justice in an institutionally unjust world.  A soldier is in prison for revealing war crimes, while war criminals walk free.  Unmanned drones are slaughtering civilians all over the world.  Where has the anti-war movement been since Barack Obama took office?  Where did the outrage go?  Where was our collective morality?

On August 16, it was on SE 11th Avenue in Portland, Oregon, and it culminated in the occupation of an Obama campaign office, resulting in the arrests of five defiant activists. Cascadians Against War (CAW) had successfully organized a day of nonviolent civil disobedience that PDX Bike Swarm is proud to have supported.

When Daniel Ellsberg released the Pentagon papers showing the depth of corruption that drove the US into war against the people of Vietnam, the government tried and failed to put him in prison. Ellsberg became a legend of the anti-war movement, and many credit the eventual US retreat from Vietnam to a massive shift of public opinion due to his courageous act of conscience.

We live in a different era now. While an official draft no longer exists, the gutting of education funding and lack of jobs forces many youth to join the military. Journalists are no longer allowed to freely cover battlefields; instead they are ’embedded’ with the invading army where their ability to apply objectivity is routinely compromised. Killing is often done by unmanned drones, capable of wiping out entire villages, while the people piloting these death machines sit comfortably in air conditioned offices half a world away. There may be less warfare today than in centuries past; however, war has become increasingly asymmetrical, with less risk for the aggressor and civilian casualties overwhelming the number of military deaths.

We may now have greater access to information, but we have fewer people actually doing the kind of investigative work that ultimately brought down the Nixon presidency, for instance. So when PFC Bradley Manning, who is said to go by the first name Breanna, allegedly released tens of thousands of text and video documents to Wikileaks in the lead up to Arab Spring and Occupy it seemed that the precedent set by Ellsberg’s vindication would convey de facto immunity to Manning. Not so. Though convicted of no crime, Manning has spent the last two years in prison. Reports of sleep deprivation, extended solitary confinement, and of being stripped naked and left for hours have made it clear the government wants the public and those serving in the military to know that Manning is being tortured.

The message seems to be, tell the truth about war crimes and you’ll be punished in ways that most people can’t imagine. This is the level of criminality and wickedness that permeates the minds operating Fortress America. It is a criminality largely ignored by the media and activists since Obama became president.

It will be ignored no longer. The actions taken by Cascadians Against War on A16 were mirrored by similar occupations in Oakland and Chicago.  Many participants were unaware of this coordination until after the offices had been taken over, likely a tactical decision made by the organizers to stay low on law enforcement radar, and it worked brilliantly. The march here in Portland had initially been followed by several police on bicycles, but they were nowhere to be found when we moved from the sidewalk to the street.

The collective elation of finally returning to the streets was palpable. Despite the exhausting heat a sense of power emanated from the crowd – there were fists in the air and smiles everywhere.  We left the right lane of 11th Avenue open to vehicle traffic, allowing buses to make stops uninhibited. Cars passed and honked in support of our signs demanding an end to the drone wars and the incarceration of PFC Manning. Bike Swarm remained close to the front of the march, looping back and forth. Somebody was blasting Rage Against the Machine from a bike sound system. The sun was golden red, low in the sky. Everything was perfect.

By the time police started closing in on us, the march was over. We had arrived at our target.  A very short game of cat and mouse had been played with the police and we were the victors.  They monitored us from a distance as eight activists entered the campaign office.  We continued calling out our condemnation of Obama’s wars while covering their campaign signs with our own.  Somebody speckled the side of their building with dozens of bright orange ‘Free Bradley Manning’ stickers. 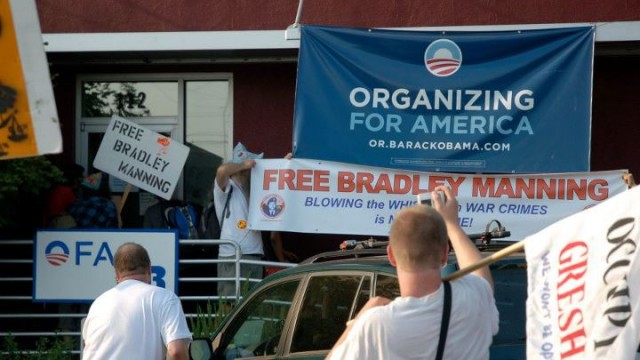 The crowd – exhausted from a day in the blistering hot sun – waited anxiously to see what would happen with people clustering together in whatever shade was available. After about 90 minutes, Bike Swarm took  a much-needed break, rounding the corner for victory pints at the local pub. We talked about the day, our sense of solidarity with Manning and CAW, and future potential actions. Several Swarm members headed home. After night fell, the few of us remaining decided to return to the scene of the occupation.  Upon arriving we found everyone had left.  A campaign staffer informed us of the arrests made in our absence. The stickers placed on the building were now gone.

We later learned that at about 7 pm, five protesters including legendary septuagenarian activist Nan Wigmore were arrested inside the office and brought out in zip ties. The crowd shouted support for the arrestees and demanded that the officers not steal her walker, as had previously been done by Chicago police during the NATO protests earlier this summer. Once the arrestees were driven away in a van, the crowd proceeded to march downtown to await their release.  Within minutes after arriving, the arrestees were already leaving the police station to supportive cries of “Free radical Nan!” and “Free Private Manning!”  Nan was the last to be released, and her walker was returned undamaged.

So where do we go from here?  After such a successful day of action it’s hard to imagine Cascadians Against War won’t continue building toward even larger events. The Free Cascadia movement as a whole is obviously anti-war and pro-biocentrism, but having an action this focused and well coordinated surely will have a positive impact on future choices.

Recruitment centers are the first foot in the door for the military to start turning kids into killers.  By targeting those locations on A16, Cascadians Against War, PDX Bike Swarm, and all the other activists and occupiers involved helped bring attention to this fact, to the horrific treatment of whistleblowing hero PFC Manning, and to the increasing detachment from the act of murder that unmanned predator drones provide the Pentagon.

1 comment for “Bikes In the Street for PFC Manning”