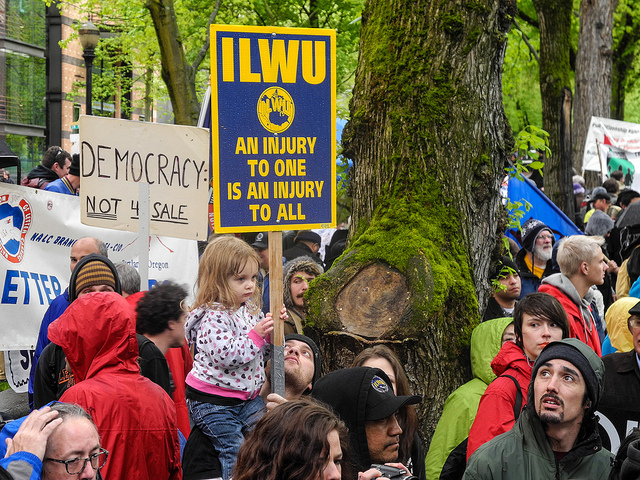 Many of the social expectations and political outlooks of today’s Labor Movement, and workers in general, were formed during the post-World War II economic expansion. With a growing economy and steady job supply, many people seemed content to focus on improving their immediate community or individual union with the expectation that, if things did not get better, at least they wouldn’t get dramatically worse.

Those days are long gone. Since the World War II expansion, the nation’s wealth and power have become dangerously concentrated in a few hands. This has been accompanied by 30 years of a declining standard of living for workers and a devastating drop in union membership. The total control big business has gathered over the political system has assured that their priorities rule the day at the cost to society as a whole. This cumulative process has resulted in a new historical phase of accelerating attacks against previous gains, such as Medicare and Social Security, and requires from workers a different outlook than that developed after World War II.

Unfortunately, the old habits persist to varying degrees with especially damaging results in the slow-to-change world of the unions.

Given the challenges of the period we have entered, workers’ consciousness and their organizations’ policies must transform if workers are to reverse these crippling effects on their standard of living. The alternative is to fail to fight back against corporate dominance and face ruin. To understand what is happening and to go on the offensive workers need to learn to think socially and act politically, not simply as isolated individuals, but as a collective power.

The Role of Unions

A few have theorized that unions are an inadequate, outdated form of organization unable to encourage this development. They have become too tangled with the big business state’s machinery of control and too constricted by labor law enacted to protect the interests of the 1%. In addition, some reason that the general political assault against workers’ living standards and rights cannot be fought against one industry at a time, as unions are set up to do, but require a broader political alliance to conduct the struggle.

Many of these points have merit; however, the undeniable truth is that the unions remain our nation’s only form of working-class organization with social weight.  Without their influence there is little chance of a breakthrough for workers in challenging corporate rule or constructing better fighting organizations.  Any social movement that isolates itself from the unions rather than patiently working with (and within) them is doomed to wither on the vine.

If workers are going to learn to think socially and act politically, this will require, most importantly, a struggle to transform the policies of Labor. What must be the guiding light of this transformation? Class independence up and down the line.

This means recognizing that there is no common cause between workers and the big business elite. Elite enrichment has come at the cost of the ability of our families and communities to live securely, and the wealthy are pursuing this class war with increasing audacity. If we are to meet this challenge, it is necessary that workers learn to think socially by taking action that unites our interests against those that exploit us.

If workers are to act politically on the basis of class independence, that requires that they do not allow their fate to be determined by politicians who take their votes and money while fattening their campaign funds with even more corporate contributions. If we are to unite against those that exploit us, we must stand opposed to those politicians who partner with big business, regardless of their campaign promises.

In a May 20 speech, AFL-CIO President Richard Trumka sounded as if he were advocating class independence for the unions. “We have listened hard, and what workers want is an independent labor movement that builds the power of working people in the workplace and in political life.” Yet in the same speech he talked about “retaking state houses” in Wisconsin.  What else could that mean other than re-electing Democrats to office?

Trumka went on to declare: “Our role is not to build the power of a political party or a candidate… If leaders aren’t blocking the wrecking ball and advancing families’ interests, working people will not support them.”

Unfortunately, this declaration comes in the same period that the AFL-CIO endorsed Obama’s campaign for president. But Obama has not only stood aside while the wrecking ball has decimated the standard of living of working people, he has taken a turn at swinging the ball himself by declaring that he is open to cuts to Social Security, Medicare, and Medicaid, and that single-payer health care is off the table. In addition, he extended the Bush tax cuts for the rich, promoted charter schools and created the biggest Defense budget in US history.

The financial survival of the Democratic and Republican parties depends on Wall Street. Any talk of creating an independent workers’ movement while supporting these corporate parties is double speak. Any posturing to hold these politicians accountable is wishful thinking because their careers depend on delivering the goods to big business, as opposed to addressing workers’ needs.

The truth is that today class independence is not the policy of most union leadership. They are still living in days gone by where the corporations and their politicians were willing to buy class peace by making deals with the unions to benefit their membership. Though today the corporations are firmly focused on increasing their profits by attacking these benefits and wages, Labor’s top officials promote strategies that fall far short of drawing a class line. For example, the union officials advocate making concessions without putting up a fight and agree with Democrats that “shared sacrifice” is required by labor.

As corporations have firmed up their political control and financial resources, the failure of Labor to use strong tactics like production strikes and workplace occupations, has resulted in a sharp decline in unionization. It appears that, despite evidence to the contrary, the official line of Labor is, “Why resort to these tactics when we have been able to get good contracts in the past without them?”

The folly of this thinking can be observed on a number of different levels. All too often Labor officials announce in advance a willingness to make concessions in order to appear reasonable to the boss. In the struggle against Wisconsin Governor Scott Walker’s plan to gut public unions, the presidents of the Wisconsin Education Association and AFSCME Council 24 promised to be good team players at the expense of their memberships. They both stated they would accept Walker’s financial attacks if he backed off his intention to destroy their collective bargaining rights. Being an effective class-conscious predator, Walker took this announcement as a confession of weakness and continued on.

While entertaining contract talks, unions rarely prepare for strike action; instead they roll out the corporate campaign when the going gets tough. The purpose of this tactic is to create wide solidarity with other community organizations in order to pressure the employer to take a more reasonable approach to union demands. This is a necessary tool for victory; however, it is most frequently used as a substitute for strike preparation, which can shut off the employer’s profit  stream. Without the threat of strike behind it, a union’s corporate campaign promises meager results: As long as the profits continue, a company has little reason to respond to worker demands.

Associated with the mistaken notion that it is still possible to collaborate with big business to advance union interests, is Labor support for the Democratic Party. There is no greater hindrance to transforming the unions into independent organizations for militant workers’ action: vast resources are squandered on electing this corporate party’s politicians with little gain.

Even more damaging is how this policy subordinates the needs of workers and Labor to the priorities of big business. Union tops often speak of the need to get a seat at the table by supporting Democrats. What they don’t say is that the price of admission is the sacrifice of our class independence, the gagging of our voices, and the lowering of our standard of living.
For many rank-and-file union members and unorganized workers, habitual Labor support for Democratic Party politicians makes Labor appear to be an appendage of the party and marginalizes its ability to fight on behalf of workers.

It is becoming clearer that on their own unions cannot repel the corporate assault on workers. They must dedicate resources toward building a broad social movement based on working class issues. They must be willing to confront Wall Street, the banks and corporations, as well as both political parties. They must not rely on Obama to solve their problems, but rather mobilize independent of the politicians. They must not shy away from solutions such as taxing the rich to fund a massive federal jobs program, because these demands upset a political party’s corporate sponsors.

Arising out of the need to transform the policies of Labor towards broader outreach and class independence, the need for greater democracy within unions is paramount. The membership needs to have final say on all important issues. If the membership does not understand how these issues affect them, do not feel that their viewpoints have been expressed, or do not have the opportunity to challenge the leadership, they will simply stay at home rather than attend meetings. This isolates the leadership from rank-and-file control and promotes the development of an elite mentality that separates the leadership from membership needs.

If Labor’s policies are going to rise to today’s challenges, it cannot be done without some stress and storm within leadership bodies and their cozy relations with the corporate dominated Democratic Party. Rank-and-file members need to organize within their unions to demand democratic control of their leadership in order to adequately defend themselves and make gains.

In order for workers to have a national independent political voice they must build a broad united effort around demands that can galvanize the majority such as “Jobs not cuts,” “Medicare for all,” “Tax the rich,” and “Fully funded education and social services.” To make sure that voice is heard, the support must be demonstrated with the largest mobilizations possible, as well as other organizing tactics.

Once unity is achieved in this way, it will be possible to take these efforts to a higher level and create a Labor Party to facilitate this grassroots organizing and combat the twin corporate parties to achieve a better world for everyone.

Mark Vorpahl is an union steward, social justice activist, and writer for Workers’ Action – www.workerscompass.org. He can be reached at [email protected]