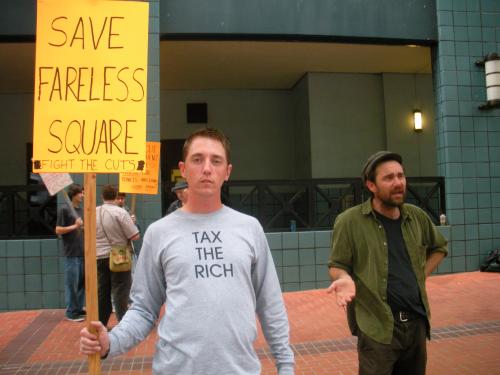 The Great Recession and its possible continuance has brought the issue of privatization to the forefront of American politics. But most Americans aren’t even aware that this debate is happening, because the media and politicians aren’t using the word “privatization”. Instead, less threatening substitutes are used to ram through a corporate agenda that aims to massively transform public resources into corporate profit.

The mass privatization frenzy is the corporate solution to the budget crises occurring on the city, state, and national level — crises caused by the recession that the banks and corporations created themselves, and are now positioning themselves to benefit from again, beyond the infamous bailouts.

The effects of the recession will continue for years, and the already slowing economy is exacerbating these effects, most notably the bankrupting of government budgets. Politicians from the Democratic and Republican parties both holler that “there is no money,” and therefore massive cuts have to be made to public services, while public employees must either be laid off or have their wages destroyed.

But another corporate solution to this corporate-caused problem is now proceeding full speed ahead: Urban Infrastructure Banks. Under this scheme, the funding of publicly-run infrastructure — roads, bridges, public buildings, etc. — will be taken out of the public realm and transferred to the corporations, who will fund these projects as long as they profit from them.

“The private sector will invest money in projects and get it back in the shape of tolls, user fees, premium pricing or even tax breaks.”

So essentially, a big bank will front a city the money — presumably at a giant discount — to buy a road or bridge; the tolls charged will go to the bank with interest (profit), while the bank is also likely to get tax-exempt status for its profit. The bank will also have a profit motive to do the cheapest possible maintenance work, if any at all. Working people will thus pay more to use these services so that the banks can make a profit.

This nefarious right-wing plot is being pushed hardest and fastest by the Democratic Party. The Mayor of Chicago, Obama’s former Chief of Staff Rahm Emanuel, is the poster boy for city privatization. Again from the Economist:

“…Mr Emanuel wants to spend about $7 billion to rebuild the city of Chicago — on everything from streets, to parks, to the water system, schools, commuter rail and the main airport… The city will finance the running costs of the [Urban infrastructure] trust itself to the tune of $2.5m. Several financial institutions are already lined up to make investments totalling $1.7 billion, among them Macquarie Infrastructure and Real Assets, Ullico, Citibank and JPMorgan.”

Democrats everywhere were inspired by Rahm’s corporate crusade to privatize Chicago, so much so that Bill Clinton organized a national conference of Democratic Party mayors to promote the idea. This from the official press release of the Clinton Global Initiative:

“I was thrilled when Rahm Emanuel set up America’s first urban infrastructure bank in Chicago, and I see this ongoing conversation among America’s mayors as an important step towards finding a workable model that can be replicated in every other city around the country,” said [former] President Clinton. “My hope is that coming out of this meeting, mayors will realize that attracting private investment in their cities’ roads, bridges, water and sanitation systems, waste to energy projects, and new electrical grids is an idea that will put people to work, stimulate the local economy, and increase the value and quality of life of their cities in the long term.”

Obama, too, has caught the fire of public infrastructure privatization, and has proposed a plan for the federal level.

This privatization debate has already entered the realm of other cherished social programs — Medicare, Social Security, and public education — under the catchword of “choice.”   Obama’s misnamed Race to the Top education plan consciously aims to privatize public education in a more blunt manner than Bush dared, as it awards states money if they create privately run charter schools.

And while the Democrats shed crocodile tears about the Republicans’ plan to privatize Medicare, the giant Medicare cuts that the Democrats have already proposed imply a total re-structuring of the program, i.e., its privatization. Any publicly run program that is underfunded — and thus requires individuals to pay extra for the baseline service — can be considered half privatized.

President Obama has made “taxing the rich” one of the pillars of his election campaign, but all he promises to do is to remove the Bush tax cuts for the rich — the same promise he broke after the last election. But Obama combines his “tax the rich” slogan with promises to balance the national budget by making massive cuts to social programs: Obama’s proposed budget included $3 trillion in cuts, including hundreds of millions of cuts in Medicare and other social programs.

Therefore, labor and community groups need to put forward a completely independent demand to tax the rich and corporations, including the demand of NO CUTS to social services. There is enough money in the United States to fully fund a national jobs program, Social Security, Medicare, public education and all vital social programs. But this money has accumulated in the hands of the top 1%, who must be taxed at 70 percent or higher for the benefit of all working people. All forms of income and wealth of the 1% must be “on the table” for taxation.

Shamus Cooke is a social service worker, trade unionist, and writer for Workers Action (www.workerscompass.org) He can be reached at [email protected]