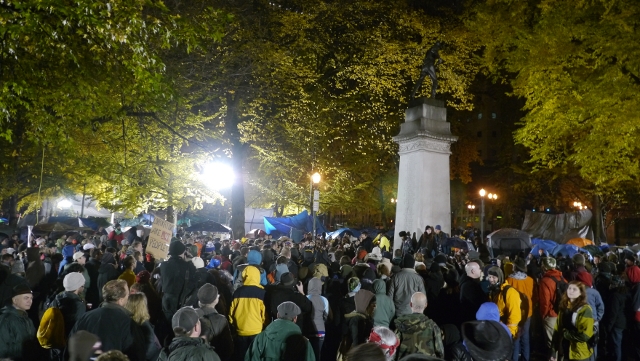 This article is written in response to the Cynthia Alvarez piece, “Progressives Must Move Beyond Occupy”.

It has been a year since the first cries of “We are the 99%” rang out in Portland, followed by much commotion, ropes strung between trees, pepper spray, large assemblies, a kitchen full of food and volunteers, needless arrests, violence and vandalism, and donations pouring in from unions and small-town grandmothers alike. A certain spectrum of talk radio took great pains to minimize the effect of the protests, and yet here we stand a year later, still enraptured by discussions of money-in-politics, tax code fairness, the secret lending practices of the Federal Reserve and Citizens United. After a two-year run of Tea Party politics dominating the news cycle, Occupy has effectively changed the national conversation.

Still, there is a tension within the movement which existed from day one and is now – at day 365 – easier to define and, perhaps, address. Occupy has, from its beginnings, eschewed traditional political roles. Voting is even anathema to some. Though I understand the angle, I don’t personally have much taste for people who hold political (or even social) opinions but don’t vote. A certain strain of Anarchist or Communist feels that any involvement with the establishment political system is tantamount to complicity. I tend to think that our political system is accessible via voting to anyone qualified, who can pull a lever or send a ballot via mail, but that’s not exactly everyone. So for the purposes of this discussion I will set aside the Anarchists and Communists who don’t believe that voting is responsible. That’s a discussion for a later day.

What remains when you set aside non-voters is a collection of libertarians, progressives, greens, conservatives and liberals who are all in agreement on five or six core issues, and about 25% of whom are separately mad about another half dozen things. But most importantly to the discussion of progressivism in Occupy is this: all the areas of agreement in Occupy are on progressive issues.

This is going to be a rough approximation, but I want to list five items which are traditionally-progressive causes and also Occupy-focused ideas. First up is the Citizens United diaspora, committed to removing big money from our politics and preventing corporations from purchasing our elected representatives. From the beginning, this has been a root cause for Occupy and has everything in common with the progressive tradition; progressive populism has always demanded equal political access for all, not just the wealthy.

In the same vein, Occupy has long advocated for an audit of the Federal Reserve. While this is often just a talking point of the Ron Paul-loving-libertarian crowd, the fact remains that our central bank is primarily working for the interests of large banks. This sort of collusion between central policy-makers -“independent” as they may be – and the private sector is, just as in the Citizens United case, a primary target of progressive politics.

Third is consumer safety. While this might not seem a massive central concern of the movement, it is integral in so many Occupier causes: pollution, nuclear radiation, appropriately-labeled food (GMO, pesticide, pink slime, etc.), or simply-worded credit card, loan and mortgage terms. Progressives are the champions of good government policy related to keeping people healthy and safe. Arguably, the local fervor over fluoridated water is, in essence, a progressive call for consumer safety in public policy. Agree or disagree, the progressive tradition is in high gear in Occupy when it comes to ensuring that people have the information they need to make safe and responsible choices.

Fourth is workers’ rights. From the port shutdowns in Oakland and Longview, to the support of the Chicago Teacher’s Union, and even back to the Wisconsin Recall where much of the Occupy energy seemed to build, the rights of workers to a decent wage and a viable contract are progressive causes that have enjoyed majority agreement in Occupy. We can bicker about specifics – funding mechanisms and the like – but in the long run it was not teachers, dock workers or emergency personnel who broke the economy, and they shouldn’t bear the brunt of making up for lost revenues.

Which brings me to the last, most serious point of all: Glass-Steagall. After the Great Depression hit, FDR (a highly-progressive President) worked from many different directions to fix the broken economy. The WPA put shovels and rakes, trowels and paintbrushes into idle hands. Food and unemployment benefits were unveiled to keep people from starving. But the most crucial need was to tackle the root cause of the depression – the financial markets’ failure to self regulate. Much in the spirit of Teddy Roosevelt breaking up monopolies, this was accomplished by breaking up commercial banks (where people make deposits and draw funds), investment banks (where people find brokers to help them buy stocks and gamble on exchanges), and insurance companies (specifically the kind that insure against exchange-gambling losses) – all institutions that now fall under the label “too big to fail.”

The reason we have been Occupying is due to the massive losses incurred after the housing market tanked. It’s a progressive issue, a conservative issue, a liberal issue, a libertarian issue and a populist issue. Banks should not have a monopoly on the ability to gamble without losses, as in the current system, where we have accepted “too big to fail.” Nobody in finance has gone to jail for the subprime-mortgage mess, an event which could not have occurred if investment banks and insurance companies were still separate entities. The sole banker in prison for a Ponzi scheme is Bernie Madoff, and only because he robbed rich people.

Progressives who leave Occupy out of frustration with the process do a disservice to the progressive populist movement of our lifetimes – the sort of energy that only seems to appear in the US every 100 years. Perhaps disillusioned progressives could join up with a third party such as the Pacific Green, Progressive, or Working Families Parties, but that shouldn’t preclude them from Occupying. Without progressive support, this moment in history might evaporate. Should the strong coalition of people that subscribe to a set of values easily described as “progressive” give up this moment, then corporate-backed parties – including candidates and unelected interlopers – will be able to steamroll Occupy as if it were nothing but an unwashed coalition of pissed off children.

Slowly, this movement is taking direct action against banks, bosses, big money in politics and more. If you open your eyes instead of buying into the corporate-backed media slogan that we have no concrete goals, you’ll witness an amazing thing. Do not give up hope, progressives: Our time has come, and no stumbling blocks, procedural hangups or frustrations with the work of coalition-building must stop us. It’s time for us to move into the next phase where a leaderless movement made up of leaders strikes out into communities and builds support for ideas – ideas that share a wide swath of support and only are attainable if we do the work.

We can’t give up when we’re getting closer every day.

2 comments for “Progressives Must Occupy”