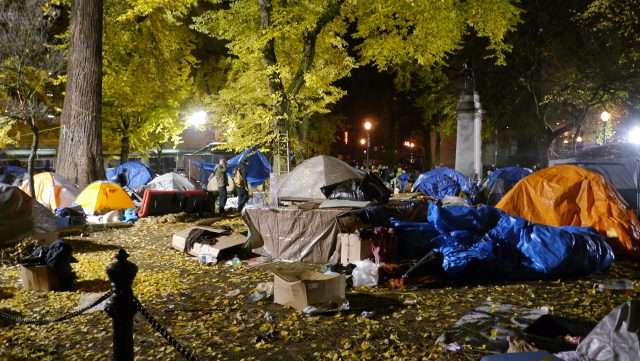 Average citizens evaluate political organizations based on how those organizations actually function. They know a political organization is a microcosm of the society it wishes to create. So after ten months of heavy involvement in Occupy, I have this question for Occupiers: would you honestly want to live in a society that is organized like Occupy and functions like Occupy? Do you want a society that claims to be “leaderless” while its true leaders remain hidden and unelected? Do you want a society with no written rules? Do you expect the general public to support an organization that would extend this model to the rest of society?

Progressives must create a more democratic model than the status quo that also functions better -something regular people would be willing to adopt in principle. Studies show the general public agrees with Occupy’s basic message, but Occupy’s inept organization has managed to squander this strategic opportunity. Occupy is actually impeding progressives’ outreach to the general public. Progressives need new organizations based on the successful planning and leadership strategies of the civil rights movement to create an army of volunteers.

Occupy provides a valuable function by voicing a public “NO” to economic injustice and inequality in our society, and by distributing information about nefarious elite activities. But because of its opposition to leadership and written rules, Occupy can’t move beyond this basic level to become a viable fighting force capable of the positive, complex, constructive action required to form society anew.

Occupiers generally subscribe to the flawed argument that less organization leads to more equality and democracy. So most Occupy groups have avoided creating written rules because they feel this would reduce democracy. But our insistence on using oral traditions to store and communicate our rules hobbles us in competition with adversaries, who all use written codes. Occupy will have no more success with this approach than previous non-literate groups who competed with literates.

We approach every new meeting and item of business with an open, make-it-up-as-you-go, spontaneous oral process, recapitulating at each step all previous steps taken. This process, created by small groups on the street, is ill suited to organizing large groups for the complex tasks necessary for societal reform: publishing creative works, negotiating with unions, putting laws on the ballot, countering corporate privatization schemes, conducting election campaigns, etc.

Because process is not codified in writing, Occupy can’t build on previous decisions at subsequent meetings to get to the next level of complexity. Without written documents we can only refer to fallible human memory. We lose continuity from meeting to meeting. And without written codes to prevent subversion, we remain more vulnerable to it than our adversaries. Of course, we should not simply imitate authoritarian methods of organization to compete. The challenge facing progressives is how to create a competitive, highly complex organization while retaining the democracy and equality we value.

The second flawed argument inhibiting Occupy is an inappropriate extension of the idea of equality. Our rightful focus on equal opportunity and representation has led us to erroneously organize ourselves as if all people are equally capable. This entrenched Occupy dogma cannot be challenged within the group and is voluntarily avoided, even though many Occupiers understand that it’s bogus. Asserting that people are unique, non-interchangeable individuals makes you vulnerable to the false charges of being “undemocratic” and “elitist.” And the de facto, unelected leaders often use their own undemocratic authority to squelch discussion of it. This fallacy of human interchangeability is hurting Occupy badly. For example, nobody in our Occupy group can do the technical website work right now, so our website is completely nonfunctional. If we were all truly interchangeable, then any one of us should be able to step in and do it. Obviously, education can make people more interchangeable to some extent. We could teach some (not all) people how to maintain the website. And some of those (not all) would be willing to do it. But regardless of how much educating we do, only a small number in Occupy would be both capable and willing to do this job.

The most important human resource allocation for any organization is in leadership. Leadership is everywhere in human history, indicating we have probably evolved to prefer it. Occupy tries to ignore this fundamental aspect of human nature with its determinedly “leaderless” dogma. But every human group, including Occupy, has leaders whether they admit to it or not. At a minimum, leaders are the more dedicated people: those who do major parts of the work and show up regularly. The best leaders go beyond these basics by contributing brilliant, unique ideas that capture the public imagination and amplify the public mood. They can visualize what has to be done strategically in a way that most us can’t. A group with effective leadership will always defeat a group without it. Occupy’s refusal of leadership seriously impairs its effectiveness. Occupy can’t negotiate with other groups in society (unions) because we have nobody in positions of responsibility/authority. And in the long run, the claim that Occupy has no leaders is dangerous because it hides the process of choosing and monitoring them, placing it outside conscious control by the group. Occupy definitely has leaders. I’ve met them. But ironically, the process of choosing them is not democratic or open.

Progressive organizations should be electing people to positions of responsibility, trusting them to do a good job, and weeding out those who aren’t trustworthy. Occupy won’t do this, however. We claim to want a collective where we all support each other, but we seem strangely reluctant to trust our fellow Occupiers with responsibility/authority. All human organizations must solve this problem: balancing collective authority against assigned authority in leadership. To repulse the complex, highly coordinated attacks on progressives, we must have leaders like every previously-successful social movement.

Progressives must battle strategically for the hearts and minds of the public like a non-violent military organization, or we will lose to our adversaries, who are using military strategy (often violently). Without leadership and written rules, Occupy cannot take the initiative or go on the attack. We can’t even develop a battle plan. We have no philosophical “spear” to attack with. John Lennon’s challenge to revolutionaries was, “We’d all love to see the plan.” But after a year, Occupy has none. Occupy San Francisco’s website has a one page “declaration” mainly outlining the terrible system we live in. But, like most other Occupy websites, it makes no specific suggestions about the kind of society Occupiers actually want.

Corporate apologists in every area of society regularly present coherent written arguments in favor of privatization. But we offer no alternative, except to say we reject privatization. They have a spear and we do not. A coherent progressive plan/platform could become the focus of the debate, putting our adversaries on the defensive and forcing them to discuss our vision of society. We would win that debate because our plan would be more congruent with American values of equality, democracy, freedom and individuality. But instead, we play into their hands by constantly reacting to their privatization initiatives. Creating a party platform is hard work requiring structure and organization that Occupy simply cannot provide.

Occupy strategically defaults to defense instead of taking the initiative with direct actions. Most of our time is spent reacting, trying to “defend” something. But we can’t manage to defend anything against highly organized attacks coming from all sides. Ironically, the most effective Occupy events so far in Northern California have been the scattered “direct actions” that took the initiative – the two Port of Oakland closures and the March 5th Occupation of the Capitol Building in Sacramento. Progressives need a system of leadership and rules that can create a coordinated, continuous series of direct actions to build momentum and disrupt our adversaries. We need a creative plan of non-violent attack that captures the public’s imagination.

Progressives must break the cycle of self-sabotage. We know how to effectively organize but seem reluctant to do it, perhaps because we are subconsciously afraid we might win. Maybe we subconsciously want to stay in the more psychologically comfortable position of outsider underdog where it’s easy to criticize what the evil powers-that-be are doing. We can always be right if we don’t create our own plan or actually do anything. Winning requires a different mindset. We must stop embracing our powerlessness and the elite’s designated role for us as “losers.” A consistent defensive posture is the hallmark of losers. We must take the initiative and attack.

The fallacious, impractical, unrealistic elements of Occupy philosophy ensure it will never become a viable progressive fighting force. Only by rejecting these constraints in favor of organization that facilitates winning will progressives be able to build a serious engine of societal reform. Serious Occupiers who want to reform society should move to better-organized progressive groups. I will subscribe to Occupy networks and might attend Occupy direct actions. But mainly I’ll be looking for other progressive groups who could actually do something. The Green Party, for example, has inspiring leaders and a constructive plan for a “Green New Deal.” Perhaps it’s time to (finally) create a national Progressive Party – an umbrella party for all progressives that articulates a general progressive platform and provides the leverage to move national policy.

2 comments for “Progressives Must Move Beyond Occupy”