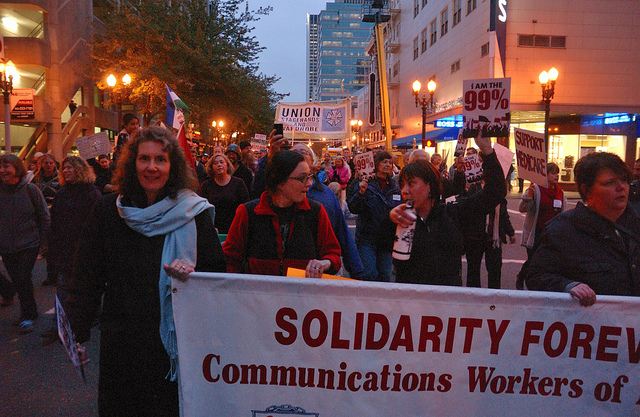 The International Association of Machinists just succeeded in negotiating a humiliating defeat with Caterpillar after a 15-week strike. Workers lost considerable money by striking, and then lost even more with the new contract, accepting almost every concession the company demanded despite the fact that the company was sitting on a record $4.9 billion in profits. The union let scabs cross the picket line and failed to stop production, almost guaranteeing defeat.

In the wake of this debacle, one might ask: Are unions doing everything possible to defend their members? As many union members are beginning to recognize, the answer is a resounding “No!”

What Unions Are Doing Wrong

For example, the unions have locked themselves into a losing strategy. Like the psychotic who keeps repeating the same behavior while expecting a different outcome, the unions obsessively throw most of their resources into electing Democrats to office, thinking these politicians will bestow generous favors on unions in return. Rather than depending on themselves and putting up a fight, unions sit back and hope the Democrats will save them. However, once elected, the Democrats, who have accepted even larger campaign contributions from the 1%, demand concessions from public workers, they shower tax breaks on the corporations, and they conclude by cutting public education and social services to those that need them.

This unholy alliance between unions and Democrats is connected with a second fatal flaw that many unions exhibit. They have adopted the philosophy that politics is a dirty game – a dog eat dog world – where everyone who has the money lobbies politicians and showers them with generous campaign contributions to win favor. This is what is called “realpolitik,” where politics is based on money and power, not principle. It is why, when it comes to budget cuts, the poor are always the first to suffer the loss of programs that serve them: they can’t afford the campaign contributions nor the expensive lobbyists. By descending to this level rather than exposing and criticizing this sordid ritual, unions isolate themselves from the general public, not to mention from other unions that are engaged in the same practice, and they demoralize rather than inspire.

In fact, many unions have an entirely negative public image because they are perceived as pursuing their own narrow interests at the expense of the public good. Environmentalists, for example, have argued that the proposed extension of the Keystone XL Pipeline — from Canada to the refineries in the Gulf region — will certainly spike global warming and could tip the planet beyond the point of no-return. Nevertheless, The New York Times reported: “But many companies and unions around the country have been clamoring for the extension [of the pipeline],” since it could create as many as 20,000 jobs.

More recently, several New York building trade unions have joined a group of businesses lobbying to reduce the salary and benefits of public workers. These unions calculate that by taking money from public workers, more money becomes available for infrastructure projects, which will directly benefit them.

By focusing exclusively on their own interests, unions might think they are maximizing their prospects for success. In fact they are accomplishing just the opposite. Strong public support for union struggles for higher wages and better benefits can easily become a determining factor of the outcome. If a union can organize support rallies of 50,000 — 100,000 people, this show of solidarity can discourage scabs from crossing picket lines, it can turn back the police who conclude the crowd is too big to control, it can imbue the strikers with the conviction that their cause is just, and it can demoralize a corporation that wants to maintain a positive profile with the general public. Massive public support and huge demonstrations are one of the most powerful weapons available to unions.

This point was forcefully made this past week by construction workers in Melbourne, Australia in their dispute with Grocon Company. Union workers walked off the job, protesting management’s attempts to preempt the union and appoint shop stewards themselves. Thousands of other union workers showed up on the picket line in support of the construction workers, and sympathy strikes in other cities spread. When mounted police tried to escort scabs onto the worksite, the crowd was so large that the workers succeeded in repelling them and the police retreated.

Next, unions will also need to reform their internal dynamics if they want to effectively protect their members. All too often unions have a top-down structure. On paper they look democratic, but top officials typically make all the substantive decisions with little input from the members. In this way, the union officials can minimize criticism of their performance and maximize their prospects of re-election — how can members criticize if they do not know what the officials are doing?

There are a number of devices that union officials employ to minimize the role of the members: officials fail to inform them of important decisions that they make, including whom they decide to give union money to; they hold conventions where 90 percent of the proceedings are devoted to “dog and pony” shows, allotting only minimal time for members to discuss and debate policy decisions; they appoint people in advance to speak in favor of their own policies in order to isolate those who have objections; they use parliamentary tricks to rule opponents out of order or call the question before any real debate can transpire; and so on.

In contrast, when members are convinced that their voice makes a difference in the union decision-making process, the union is strong. These members participate in picket lines, they don’t scab, and they stand together in support of each other, knowing that their strength lies in their unity. When decisions are made, these decisions clearly represent the will of the majority.

But in addition to the question of internal democracy, unions need to reform their compensation practices. Top union officials frequently make two, three, sometimes ten times as much as the rank-and-file members they supposedly represent.  But such salaries place the officials in an entirely different world than their members where they do not live with the gnawing day-to-day financial stress that most people suffer. Whether true or not, bloated salaries give union members and the public in general the impression that union officials only care about their own financial situation so that gestures of support for the rank and file seem like a mere show. The officials’ salaries should be drastically cut and then permanently tied to the wages of their members so that if the members do not get a raise, neither do the officials. Such a mechanism will foster an identity of interests.

What Unions Have Done Right

This role of defending working people in general, of course, is not at all foreign to the union movement in the U.S. In the 1980s, during the height of South African apartheid, college students were pressing their universities to disinvest in South Africa. In the midst of an anti-apartheid demonstration on the U.C. Berkeley campus, a large contingent of ILWU (International Longshore and Warehouse Union) members marched onto the campus to support the rally, carrying a banner that read: An Injury to One is an Injury to All. Today unions could be organizing demonstrations in support of the striking mine workers in South Africa and sending financial support in order to let the miners know that they are not alone.

More recently, in New York City a demonstration was organized to protest the hideous and racist “stop-and-frisk” policy where police do exactly that to anyone they deem suspicious. Not surprisingly, of those stopped, 87 percent are Black or Latino. Significantly, unions played a major role in this demonstration.

What Unions Should Do

But defending the interests of working people in general cannot amount to a pretense, an occasional event, or a sideshow, playing a distant second to electing Democrats to office. Defending the 99% must be the main event. This means that unions must claim the moral high ground. They must play a leading role in protesting racism, protecting the environment, defending women’s rights, the rights of immigrants and the rights of those in the LGBT community. Unions must protest the closing of public schools and urban renewal projects that only benefit the rich, they must defend workers in other unions from attacks, help non-union workers organize unions, and support the struggles of workers in other countries. Meanwhile electing Democrats to office should be phased out, given their abysmal record in relation to working people and their strong ties to the 1%.

This means that unions must take on the challenge of creating a powerful social movement, independent of both political parties. They must organize huge demonstrations around the issues that working people care most about: a federally funded jobs-creation program to put millions of people back to work, the defense of Social Security and Medicare, and fully funded public education and social services paid for by taxing the rich. The Democrats have defaulted on these issues and in fact have already signaled agreement to cut Social Security and Medicare.  They have given corporations additional tax breaks while cutting funding to public education. And the Obama administration has refused to launch a federally funded jobs program, claiming that the government is not in the business of creating jobs, yet Obama bailed out Wall Street — the 1% who are responsible for the loss of millions of jobs.

In order to succeed in these struggles, unions will need massive support. Working people are suffering. However, they will become active and provide overwhelming support if they are assured the unions are defending everyone’s interests, not just special interests. By changing their orientation, unions could begin to inspire working people, change the political landscape, and start to create a better world in favor of the 99%. But they will have to sever ties with the 1% first.