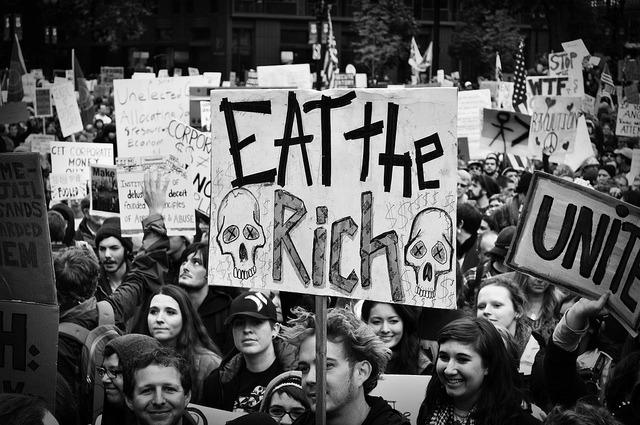 With the November elections right around the corner, the millions of unemployed and underemployed have little reason to care. Aside from some sparse rhetoric, neither Democrats nor Republicans have offered a solution to job creation. Most politicians seem purposefully myopic about the jobs crisis, as if a healthy dose of denial might get them through the electoral season unscathed.

In reality, the jobs crisis continues unaddressed, and threatens to get worse after the election. The post-election “fiscal cliff” of social cuts — “triggered” by Obama’s debt commission —will pull the economy below the current treading-water phase, drowning millions more workers in America in unemployment and hopelessness. In addition, two million more long-term unemployed — those lucky enough to still receive benefits — face the very likely possibility of having their benefits ended due to the trigger cuts.

But this is all part of the plan. The current jobs crisis is not accidental; there are public policies that could be implemented — such as a federal jobs program — that would stop unemployment in its tracks. Both parties agree that this cannot  be done for the same reason: high unemployment is desirable since it acts as a sledgehammer against wages, lowering them with the intent of boosting profitability for corporations.  Creating this nationwide “new normal” takes time.

Until corporations have an ideal environment to make super profits — aside from the short-term money printing of the Federal Reserve — unemployment will remain purposefully high. The Feds massive money-printing program — called Quantitative Easing (QE) — is a desperate move that risks super inflation, yet is deemed necessary until politicians implement the economic new normal for workers in America.

This policy is referred to as an “adjustment” period by some economists. Corporations and their puppet politicians have used the recession to start implementing the new normal of lower wages, reduced benefits, and fewer social programs on a city, state, and federal basis. In order to complete this national adjustment, expectations for working people must be drastically lowered, so that they’ll be less likely to be angry and fight against this onslaught.

This was Bill Clinton’s intention when he told the Democratic National Convention, “The old economy isn’t coming back.”  Most people in America have yet to realize this, but the economic policies of the Democrats and Republicans reflect a conscious plan to push wages down and shred the safety net to fit the “new economy” standards sought by corporate America.

Because corporations only hire workers in order to make profit, businesses today are sitting on trillions of cash, waiting for a sunnier day to invest in labor. The lower the wages of workers in America, the brighter the skies for corporations’ bottom line. It is this basic economic interest driving the jobs crisis, as politicians only offer solutions that “encourage businesses to invest” rather than creating immediate solutions for working people.

But millions of people are waiting for sunnier days too. A large number are seeking to wait out the recession by returning to school and are now graduating; a record 30 percent have bachelor degrees, a number that is expected to rise. The increasing number of graduates will drive up unemployment, while those lucky enough to find jobs aren’t finding one capable of paying off their massive student loans. The trillion-dollar student loan business is yet another example of wealth transference from bottom to top: students borrow money from the wealthy, and pay them back with interest, sometimes exorbitant interest.

The Bureau of Labor Statistics indicates that there are 12.5 million people who are officially unemployed but an additional 9.5 million who are “unofficially” unemployed — those who are not actively looking for work, “discouraged workers,” part-time workers who want full-time work, etc. The number is almost certainly higher. These workers are not counted in the “official” unemployment numbers, and this unofficial number is getting worse. In August 2012, 368,000 more workers joined this illustrious group by dropping out of the labor force, i.e., they gave up looking for a job and thus are no longer counted as unemployed, in this way giving Obama “positive news” since the unemployment numbers actually improved!

These workers are often referred to as “unemployable,” meaning that they are usually over fifty years of age or under 30 and are tarnished with a lack of job experience or an excess of it. Corporations can now have an abundance of workers to choose from, and are being extra picky on whom they hire, if anybody.

The new “private sector” jobs that Obama constantly brags about are much lower paying than the jobs they are replacing.   According to a study performed by the National Employment Law Project, 58 percent of all new post-recession jobs come with wages below $14.00 an hour, i.e. a not a living wage.

For those millions unable to find jobs, their future lies in either dependence on family or the state, or a risky life in the informal economy, which implies the possibility of imprisonment.

The reason that many labor and community groups have not fully explained the above facts — nor protested against them — is because they are “embarrassing” to the Democrats.  Labor unions have gone into pre-election hibernation, ignoring reality as they push their members to campaign for the president who is overseeing this economic “new normal”.

The still-sputtering economy is expected to grind to a halt post-election, with average working people again footing the bill. But millions of Americans are experiencing the politics of the 1%, and drawing conclusions; ever since the recession government policy has been aimed at benefiting the wealthy and corporations, while working people have only experienced layoffs, lower wages and benefits, and slashed public services.  To stop this dynamic of austerity working people must unite and protest in massive numbers, like the working people of Europe.

In Portland, Oregon, such a demonstration is being planned, pre-election, by a coalition of community groups to “stop the cuts,” for debt relief, and against the above national policy of austerity for working people. By highlighting the bi-partisan nature of the attack against working people, the community organizers in Portland hope to educate the community to take action, so that working people are prioritized. Let the wealthy pay for their crisis.

Shamus Cooke is a social service worker, trade unionist, and writer for Workers Action (www.workerscompass.org).  He can be reached at [email protected]