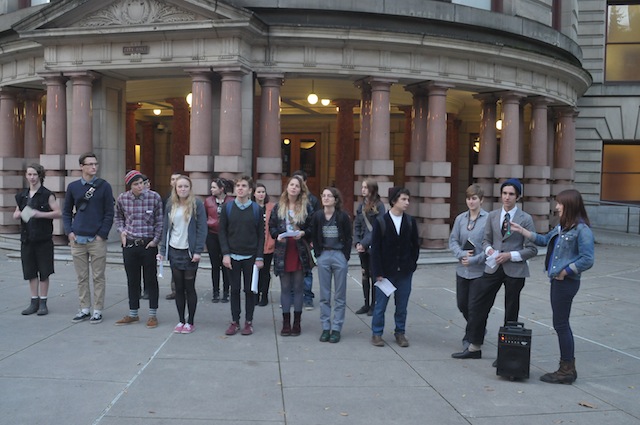 Seventeen students converged on City Hall November 7 for a press conference to discuss the damage they recently endured at the hands of the Portland Police department. Their message to both the cops and City Council was that they will not be intimidated and intend to keep fighting.

On November 3, the students – members of The Committee For a Student Union – took part in the Portland-wide Enough is Enough/Solidarity Against Austerity action to demand an end to cuts to education they say “have crippled [their] entire educational careers”. As the demonstrators attempted to turn onto NE 14th Avenue, a group of police blocked the way. The officers unleashed pepper spray without warning when those on the front lines attempted to continue on the march route.

Standing in front of over 70 supporters, students described the physical pain of the pepper spray – the feeling that their skin, lungs, and eyes were on fire. One student with asthma who had inhaled the chemical, spoke about taking a puff from her inhaler only to find some of the pepper spray had gotten into the mouthpiece. Students also talked about the less obvious if more lingering pain. “We were blinded, burnt, and traumatized,” said Grant High senior Holly Steiner. “I’ve never been so brutalized.”

Jesse Rappaport, who got sprayed in his face and eyes and has had trouble sleeping since the rally, said he “didn’t know pepper spray could have such a lasting terror.” Though Zoe Ladu, a Cleveland High sophomore escaped some harm by burying her face in the backpack of the person in front of her, she was horrified by the sight of her suffering friends. “We’re 15,” Ladu said, “and we’re having to hold open our friends’ eyes while we try to help them as our hands are shaking.” 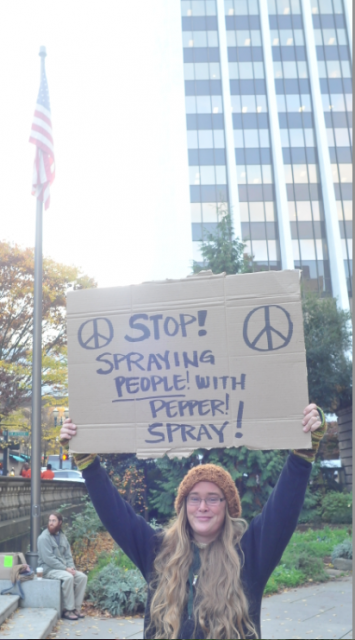 The march was the second time in less than a week that police had deployed pepper spray on demonstrators. On October 30, regular and riot police used the chemical weapon on a crowd trying to stop a bank eviction against SE Portland residents Patricia Williams and Darren Johnson. As on November 3, the action resulted in only a single arrest, leading some to wonder if it has become the policy of the police bureau and the City of Portland to use pepper spray in lieu of arrests, because, at least in the short run, pepper spray is far cheaper than the cost of moving an arrestee through the judicial system.

The students spoke of exploring the possibility of filing lawsuits against the City and the police for what many are calling an unconscionable use of force. In the wake of a Department of Justice report detailing a pattern of police violence toward people with mental illness, the recent liberal use of pepper spray on students will do little to remedy the PPB’s image. For the teens themselves, the effects may be profound and enduring. “All safety I felt when seeing the police has been shattered,” said MLC student Tyler Opiela-Young.

Cleveland High School sophomore, Echo, said he will not be deterred by police brutality. “We saw what happens to people who were pepper sprayed. They were blinded for up to a half hour. When a peaceful protest is responded to with such brutality, there’s something we have to do about it. The fact that the pepper spray didn’t stop the march shows we’re going to keep going, that it didn’t intimidate us.”

Despite their shock and disappointment at community law enforcement, the students appeared united in their determination to continue working to save the schools they love from unreasonable budget guts.

“We are the future of this nation,” Steiner said. “We will not be sprayed into submission.”