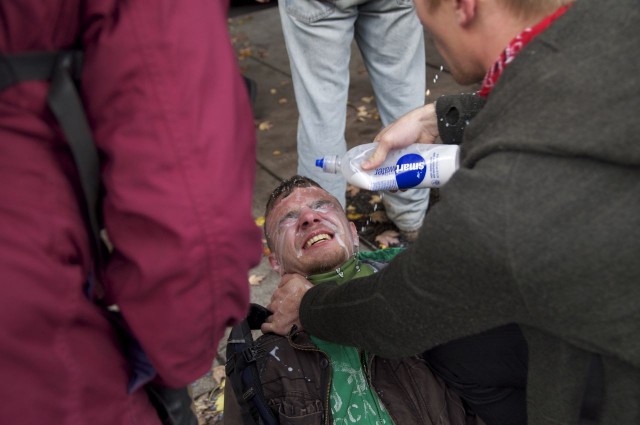 “I love these people more than anything.”

Those words were uttered by a young man who was smiling beneath red and watery eyes at the end of the November 3 action to end austerity cuts. He was among the fifteen or so people directly pepper sprayed by the Portland Police during a confrontation that resulted when those marching in the street attempted to make a turn with which the police were not in agreement.

Confrontation seemed to be the underlying theme of the day. On the one hand were the rally attendees – numbering close to 500 – who gathered to say “Enough is Enough!” to tax cuts for the rich and corporations at the expense of the shredding of the commons. Fewer teachers with larger classes, the privatization of education, escalating state university tuition, higher transit fares, and an increasingly neglected infrastructure are just a few of the many blows to public goods and services that bind us together as a society.

On the other side of the equation stood the police, once again fulfilling their institutional role as the henchmen of the 1%. Prior to the rally, cops confiscated two signs designed as shields against police violence, calling them weapons. The move was difficult to understand: the police deploy pepper spray, clubs, tasers, and guns, yet it was two 8’ x 3’ wooden and canvas banners that 15 police officers felt it necessary to encircle and impound as a societal menace.

As people gathered in Holladay Park, a litany of speakers addressed the meaning of austerity and the effect of cuts in its name. Of particular interest was Ahjamu Umi’s articulation of austerity on the world stage. Umi noted that, while the Portland rally dealt with local and national austerity measures, a large proportion of the protest is centered in Europe. At the same time, Umi reminded the crowd that the way of life they felt slipping away was predicated on the suffering of other people – victims of both European and US imperialism continually under siege in order to fuel the standard of living for what we call the “middle class”. The implication was obvious: this crisis is not one of the place and moment. Though it has only recently struck home for many, the problem is systemic and ongoing and will only be materially changed by an overhaul of the capitalist way of life.

The march began a little after 2 PM and wound around the Lloyd District. About fifteen minutes into the march, protesters brought out four more signs of the type similar to those earlier confiscated as weapons. The best way to describe these signs is as informative shields. They were created as a response to earlier marches, when the the PPB tried to keep attendees on the sidewalks, with tactics ranging from simple bike barricades to violent assaults, including hitting people with bicycles and slamming their bodies into the asphalt. The signs are made of canvas (or a similar material) and have messages painted upon them -“Solidarity Forever,” for example. The canvases are secured to large pieces of styrofoam attached to wooden two by fours with handles on the back that enable four to six people to carry them. 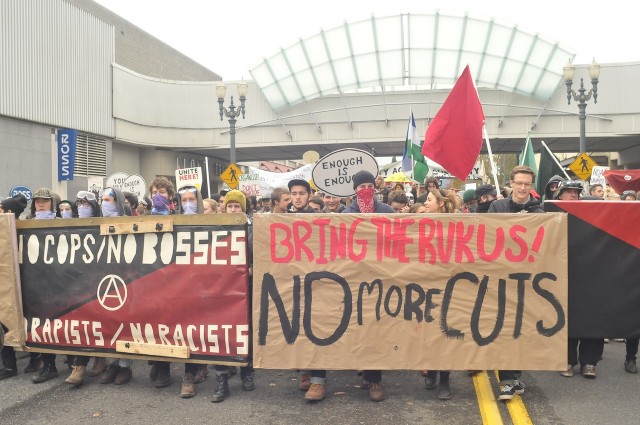 Trouble began as the crowd attempted to turn onto NE 14th Avenue toward Broadway. Bicycle, horse mounted and riot cops blocked the street, a move that brought them face to face with the protesters and their signs. Howard Zinn, among many, noted that the fragility of power is made clear by the violence the state brings to bear upon those who make even the slightest attempt to disrupt it. As at many other action days, the police had two choices that would have solved most problems in a relatively peaceful manner: Either they could allow the march to proceed and deal with ensuing traffic problems, or they could begin arresting people.

But as history and a recent Department of Justice report have proven, the Portland Police have a proclivity toward violence. Video footage depicts one police officer reaching over the signs to pepper spray those holding them. At least one other officer then sprayed protesters for some crime of which only he seemed to have knowledge. Among the officers pepper spraying people was Sergeant Kyle Nice, one of the policemen who beat James Chasse to death in 2006. In the end, there was just a single arrest, an odd occurrence, because if people were indeed committing a crime, they would have been easy enough to arrest after the incident. That they were allowed to go free only buffers the Department of Justice’s findings. 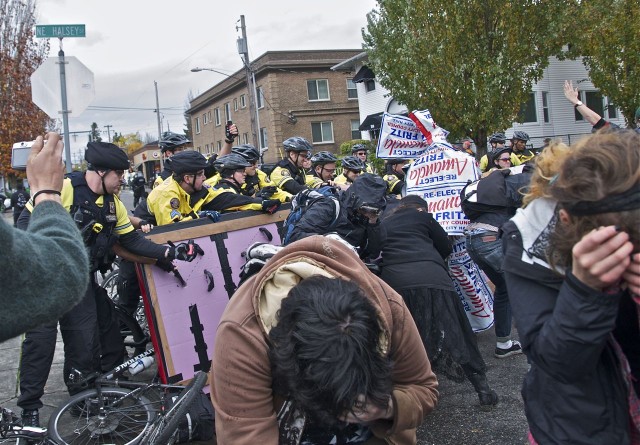 The march continued, with many of the pepper spray victims leading the way, arm in arm, undeterred. As the throng turned onto 15th, protesters spilled over the divider into the oncoming traffic lane that police had tried to keep clear. Aside from occasional missteps into piles of horse shit littering the road, the rest of the march proceeded smoothly, winding through the Lloyd District and eventually circling back to Holladay Park for shared food and music.

Holding the rally just prior to the election underscored the fact that reducing taxes on the rich and corporations at the expense of cutting the social safety net for the 99% is the purview of both major parties. Candidate Romney has made it clear he will further service the rancid cream of society with income, capital gains, interest, and corporate tax cuts, while privatizing and gutting social security, Medicare, and anything else upon which he can place his mitts. Obama uses bold rhetoric on the campaign trail, but corporate money has a strong hold on all Democrats, and our current president has too often shown a willingness to embrace the basic building blocks of funneling wealth and power further upward.

As always, it comes down to the people. What kind of society do we want? What kind of economic system do we want? How do we want resources allocated? Lasting change will only occur through the efforts of those of us in the 99% who come together in community and cooperation to outwit and outlast the greedy money-, property-, and power-mongers now sitting atop the pyramid. 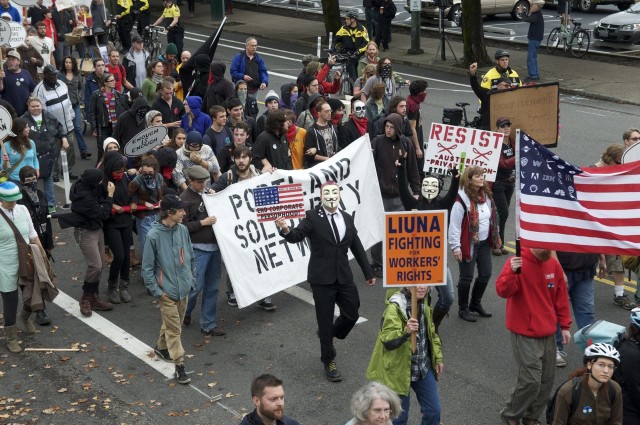