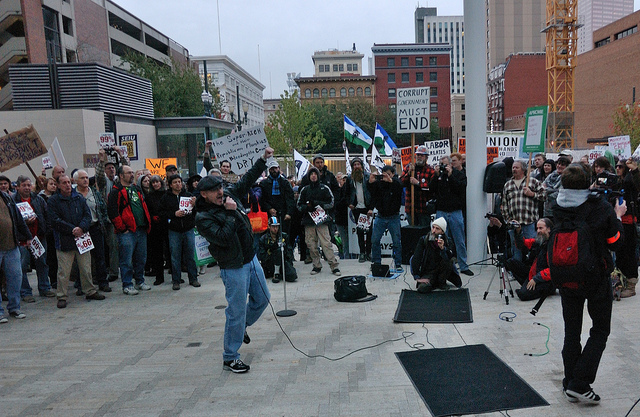 The labor movement is in terminal crisis. After decades of declining membership the union movement has been targeted for destruction: private sector union membership is near eradication, and now the corporations are on a public-sector mopping up mission, using the city, state, and federal budget deficits as an excuse to target public sector unions. Obama’s Race to the Top education policy specifically targets the nation’s most powerful union workers, the teachers.

If that wasn’t enough, enter the “grand bargain” that Democrats and Republicans are attempting to broker, at the expense of hundreds of millions of people — cuts to Medicare, Medicaid, education and other social programs are being planned, and will very likely include Social Security cuts.

These aren’t hypothetical cuts, they are being haggled over right now behind closed doors in Washington DC. The New York Times explains the “framework” that is being agreed upon to execute the Grand Bargain cuts:

“The framework would have separate goals for raising revenues and cutting the two types of federal spending: so-called discretionary financing that Congress sets annually for most programs, domestic and military; and entitlement spending, chiefly for Medicare and Medicaid… it would define a framework for negotiating a long-term “grand bargain” in 2013 to shave annual deficits by perhaps $4 trillion over the first decade.

This “framework” resembles a scaffold on which to execute the U.S. social safety net.
In fact, Obama attempted to make a similar “grand bargain” with Republicans last year. Leaked documents were obtained by journalist Bob Woodward which show that Obama made a “grand bargain final offer” to Republicans — that they rejected — which included massive cuts in the trillions to Medicare, Medicaid, Social Security, education, and other social programs.

Obama has been on an anti-worker “grand bargain” path for over a year. He is not labor’s “friend,” but foe. This is the reality of the situation that threatens the livelihoods of hundreds of millions of people.

But how is the labor movement specifically affected?

Union members depend upon Medicare and Social Security in the same way that non-union members do. An attack on entitlement programs is thus an attack on organized labor. The interests of union and non-union workers are linked by a thousand threads, regardless of the corporations’ attempts to divide the two.

There is no coincidence that the war against unions is happening at the same time as the war against social programs. The connection is that both are main targets of the corporations, since they both take money from the wealthy and re-distribute it to working and unemployed people. This is why the decline in labor unions has been proved to be directly related to the rise in inequality in the United States.

Most importantly, the “grand bargain” represents a tremendous challenge to organized labor to act as an independent social force: politicians are testing the ability of unions to intervene in this conflict as labor mobilized in Wisconsin and Chicago.

If unions fail this test by inaction or half-hearted opposition, they will prove their inability to fight back against these attacks, and this weakness will invite further aggression by corporations and their pet politicians: Predators do not show mercy when their prey displays weakness.
How has labor reacted so far to the “grand bargain” threat? With mixed messages:
On paper, organized labor has remained tough against devastating “grand bargain” cuts to social services.

For example, on November 9th 146 national labor and community groups sent President Obama a letter stating their insistence that he not cut social programs and instead fix any deficit issue by taxing the rich and corporations, while focusing also on job creation via investment in infrastructure and education spending.

The president of the AFL-CIO, Richard Trumka, has made several public statements about labor’s willingness to fight against “grand bargain” cuts. He stated correctly that the “fiscal cliff” was a creation of the politicians to attack social programs.

More disturbing is that, after labor leaders met with President Obama regarding the “grand bargain,” unions left the meeting “encouraged.” Richard Trumka said that it was a “very, very positive meeting”[?!].

It’s fine if labor leaders want to meet with President Obama. However, it’s unacceptable for them to be fooled by him and announce their gullibility to the country. Union members and the community need to be told the truth about the bipartisan “grand bargain.”
This is not a crisis that can be solved with backroom deals, letters or petitions to the President, or lobbying congressmen.

If the 146 organizations that sent the “no cuts” letter to Obama also begin planning huge nationally coordinated protests, the public debate would instantly change. If European-style mass protests happened in the streets here, working people would have begun leveraging power in their favor.

The struggles in Wisconsin and the teachers’ strike in Chicago proved that labor has an inherent power that, if released on a national level, has the ability to stop the “grand bargain.”
If labor and community groups fail to act powerfully against the “grand bargain,” the corporations will be inspired to increase their attacks on working people; they will not be satisfied with an anti-worker “grand bargain,” but will be inspired to finish off the unions along with the social safety net and then proceed to expand the privatization of the public sector.

The “grand bargain” threat is a call to action for organized labor. But will unions respond? Or play deaf? Pretending that a war against working people is not happening will guarantee a massive defeat. Preparing for the defense of Social Security, Medicare, Medicaid, and public education will require massive mobilizations in the streets while demanding that the corporations and the wealthy pay for the crisis they created.

Enough is enough! No cuts!

Shamus Cooke is a social service worker, trade unionist, and writer for Workers Action (www.workerscompass.org). He can be reached at [email protected]