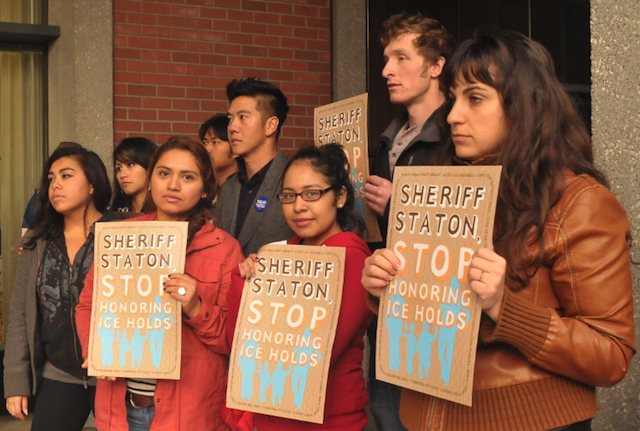 Highlighting the growing national movement away from blanket policies to honor Immigration and Customs Enforcement (ICE) holds, over 75 people gathered outside the Multnomah County Building on December 10th to urge Multnomah County Sheriff Dan Staton to limit the use of ICE holds in Multnomah County jails immediately. The rally comes on the heels of California Attorney General Kamala Harris issuing a memo to state and local law enforcement agencies stating “immigration detainers are not compulsory. Instead, they are merely requests enforceable at the discretion of the agency holding the individual arrestee.” (italics in original). Staton has continued honoring ICE holds despite the fact that such collaboration is not mandatory.

The ICE holds are a part of the Secure Communities program whose putative purpose is to identify, detain, and remove from the United States people without documentation who have been convicted of a crime and pose a threat to public safety. Despite ICE’s attempt to paint those it detains–largely Latinos–as well as the Latino immigrant community as a whole, as drug dealers, rapists, and murderers, about 80% of those detained by ICE have been taken in for misdemeanors and traffic violations.

Sheriff Staton has consistently stated his department does not provide any aid–money or personnel–to ICE, but he has still been collaborating with it in its request for holds. Over the summer a group of community organizations under the umbrella of the Activists Coming Together (ACT) Network presented Staton with a series of policy recommendations. The proposal outlined the detrimental effects of these holds not just on the immigrant community, but upon the community as a whole, as well as the financial costs to taxpayers, and with only slight reservation, suggested Staton end the Multnomah County Sheriff’s Office (MCSO) partnership with ICE. Staton committed himself to a response by October 15th, but it never came, and he has remained silent on the issue while continuing to support holds and deportations.

“There are people disappearing every day because Sheriff Staton is honoring ICE holds,” said Reyna Lopez of CAUSA. Speaking of how some members of the immigrant community are not reporting crimes–including those to which they are witnesses but not victims of–because they fear possible arrest and deportation, Lopez connected the Secure Communities program with the immigrant community’s increasing lack of faith in law enforcement. This is true not only of people without documentation, but people with documentation who are afraid they have been stereotyped as criminals because of the color of their skin.

Aside from this fear, the Secure Communities program results in is families being ripped apart and those left behind struggling with diminished income. Pepe from VOZ said, “We don’t want people torn apart from their loved ones. We need to resist this. In order to resist, we need to work together.”

Oregon Dream Activist Jaime Guzman, who appeared with his sister and father, said, “Parents have been deported for trying to bring a better life for their kids. If Staton does not work with ICE there will be less deportations, less separation of families, and less people making profit off our suffering. I’m a human and I want to remind Sheriff Staton who he works for. We’re not serving him. He’s serving us.”

After the rally, the crowd entered the building and went up to Sheriff Staton’s office on the third floor to deliver a large stack of holiday cards requesting Staton cease working with ICE. With the reception area filled and the crowd spilling over into the hallway, Guzman and Sindy Avila, also an Oregon Dream Activist, asked to see Sheriff Staton. Rather quickly, Under Sheriff Tim Moore came into the lobby and said a group of ten could meet with the sheriff in a conference room. 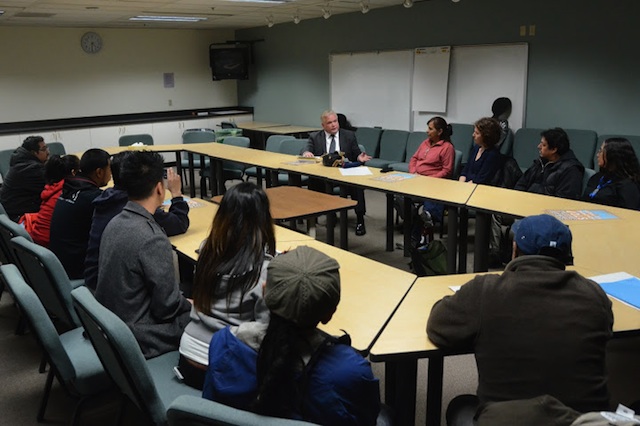 Avila expressed to Staton the immigrant community’s lack of trust in the police because of Staton’s collaboration with ICE. “It’s important to restore trust lost through these programs,” she said. “People who are victims of crime are afraid of reporting crimes. We can’t collaborate with police when ICE endangers our communities.”

Staton then explained that he has been “trying to determine where my legal authority is at” and that was why he had missed the October 15th deadline. He said was not “getting an adequate response from the federal government” and has been talking about the Harris memo with Multnomah County attorneys as well as other sheriffs. Staton then said on Monday December 17th he would issue a statement as to his course of action.

Reverend Lynne Smouse Lopez of the Ainsworth United Church of Christ then suggested Staton not cooperate with ICE. “If you do the right thing,” she said, “we’ll be behind you. And if you get grief, we will support you.”

Guzman then expressed to Staton the great example he could provide for Oregon and the country. Referring to Arizona’s SB 1070 Guzman said, “Let’s not be Arizona. Let’s be productive. Let’s be that change so other states follow our lead.”

Want to get involved? Go to: http://causaoregon.org/get-involve/take-action/urge-sheriff-staton-to-stop-needless-deportations-of-our-community-members/ for more information including how to contact Sheriff Staton and urge him to stop collaborating with ICE.