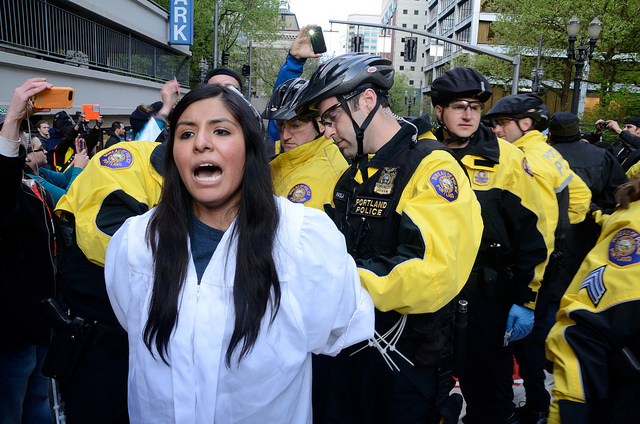 Activists Coming Together For Justice and Dignity (ACT) has issued a response challenging Multnomah County Sheriff Dan Staton’s December 20, 2012 statement claiming that he has no discretion in deciding whether or not to comply with Immigrations and Customs Enforcement (ICE) holds. Speaking for the local faith groups and member organizations that compose ACT, Bob Brown said, “Detaining individuals without having probable cause that they have committed a crime and without a warrant inhibits people from cooperating with law enforcement. People fear any contact with the police, even if they have been victims of a crime. This is detrimental to community safety.”

Staton’s December statement was long in the making. Back in July 2012, the ACT Network presented Staton with a list of policy recommendations surrounding ICE holds in Multnomah County. Staton had originally said he would respond to those recommendations by October 15th, but that date came and went.

When activists filled Staton’s office in early December to demand a response, the sheriff informed them that he was conferring with lawyers and various state law enforcement officials in order to better understand his legal options and requirements. Though he expressed sympathy for the high level of police distrust being experienced in the immigrant community, Staton sidestepped a discussion about whether this reality would inform his actions. During the meeting, Oregon Dream Activist Jaime Guzman told Staton he had two choices: be a leader, or be like Arizona – a reference to that state’s infamous and racist SB 1070 that made virtually anyone with brown skin a subject for targeting. 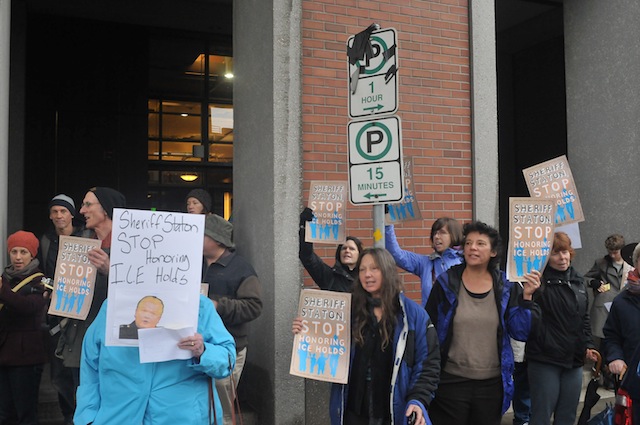 Staton’s subsequent response indicates that, for now, he has apparently chosen Arizona. In his December 20 email Staton wrote that, after conferring with legal counsel – the Office of the Chief Counsel for ICE, and the US Attorney’s Office for the district of Oregon – “The regulation is mandatory, and despite disagreement from some members of the community I must follow the law and comply with immigration holds as prescribed by federal regulation.”

Brown notes, however, that leaders in other parts of the US have shown there is no such requirement. “In California, Santa Clara, San Francisco, and Los Angeles counties they have decided that the safety of their community trumps the requests from immigration authorities to hold people so they can be deported,” said Brown. “Across the country, in places like New York City; Cook County, Illinois; Taos, New Mexico; and Washington, DC, localities have enacted policies to limit the use of ICE holds in their jails.”

In particular, California Governor Jerry Brown has stated that he believes federal immigration agents should not “coerce” local agencies into detaining people. Last December, California Attorney General Kamal Harris issued a memo telling state and local law enforcement agencies that immigration detainers were not compulsory, but rather were “merely requests” whose enforcement was left to “the discretion of the agency holding the individual arrestee.”

The results of ICE deportations have been detrimental to both the immigrant community and our communities as a whole. Indeed, at the numerous events and rallies protesting and resisting ICE raids and detainer requests dating back at least to the June 2007 raid at the Fresh Del Monte Produce processing plant in North Portland, scores of Latino immigrants have detailed their fears of calling the police – both as witnesses and victims of crime.

Claire Flanagan, coordinator of the Portland Central America Solidarity Committee (PCASC) said, “Our attempts at negotiating with the sheriff have been frustrating and unproductive.  It is clear to us that Sheriff Staton, with his decision to continue complying with ICE, is ignoring the well-being of both the immigrant community and the larger Portland community.  Deportations are violent.  They make communities less safe by breaking apart families and disrupting community bonds.  This is unacceptable.  And we intend to stop it.”

In his email Staton also wrote, “I was not elected to interpret the law, I was elected to enforce the law, whether the law is popular or not, or whether I personally agree with it.” Strangely, Staton’s email appears to contradict ICE’s own views. In a letter to the County Counsel of Santa Clara County, California, Assistant ICE Director David Venturella stated, “ICE views an immigration detainer as a request” and that “assisting ICE in acquiring detainee information is not a legal requirement.” Furthermore,  a January 26, 2011 email written by the Deputy Chief of Staff to the Deputy Director of the Department of Homeland Security/U.S. Immigration and Customs Enforcement, seems to unequivocally have answered the question “Is an ICE detainer a request or a requirement?”  The response read, “It is a request. There is no penalty if they don’t comply.” 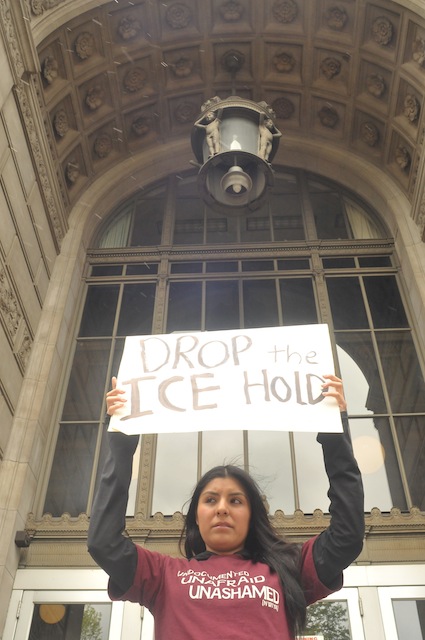 “We understand that ICE is putting pressure on the Multnomah County Sheriff’s Office (MCSO),” said Brown. “ICE has told MCSO that it must comply or run the risk of losing federal grant funding. We believe those threats should be exposed as a way to neutralize the heavy-handed tactics of ICE. We also believe that if the MCSO took the impacts of their policy to comply with hold requests to all members of our community, they would engage with community groups to figure out a strategy to accomplish a change that will be for the common good of the community. The current policy to comply with ICE holds is contrary to due process, erodes trust to all law enforcement agencies, enables racial profiling and separates families. To date, the MCSO has not been responsive to the community’s requests and has not met its own commitments for engagement.”

“We will continue to push for a change in policy,” Brown said.