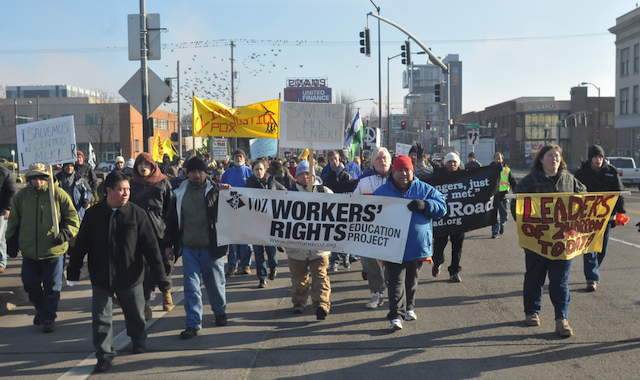 Photos and story by Pete Shaw

By the end of his life, Martin Luther King had come to the conclusion that the gains of the Civil Rights Era were nothing if they were not part of a larger human rights movement, one that brought together all the disparate struggles for justice. On January 19, over 150 people from the housing, immigrant, and labor rights communities came together in a rally and march that both celebrated King’s vision and sought to expand it, following his belief that the arc of history bent toward justice.

The rally began at the Martin Luther King, Jr Worker Center on NE MLK Boulevard. The center opened in 2008 as a city initiative in response to the day laborers who were gathering on nearby street corners looking for work. Often employers did not pay the laborers for their work, and business owners didn’t like them standing outside their businesses.

“We took it upon ourselves to organize ourselves and to find a center where we could work with the police to get some new policies enforced for workers,” said Romeo Sosa, Executive Director of VOZ.

Though the center offers day laborers a safe space where they can find work, the problem of wage theft persists. For the past two years VOZ has been pushing a campaign for legislation to better protect temporary workers. Workers and staff at the center are also campaigning for a permanent home.

“We would like to finally have ownership of this land,” said VOZ Development Director Andrea Valderrama, urging the rallyers to “remind the mayor that this is a day laborer center that does help the lives of day laborers, and we do need a permanent facility.”

The crowd headed across the Burnside Bridge, stopping at Right 2 Dream Too (R2DToo), the downtown shelter for houseless people. Controversial since its beginning – at least among the business community and elected officials – R2DToo has incurred monthly city fines at the behest of Commissioner Dan Saltzman, for what amounts to camping without a permit. The fines now amount to over $12,500.

In December 2012 Attorney Mark Kramer of Kramer and Associates filed a complaint against the city. The city contends that the fines pertain to the “establishment of a recreation park-campground without obtaining required permits” as well as violating the city’s “zoning code for construction of a fence greater than six feet in height without the required building permit or historic design review approval.” Kramer is attempting to obtain a court order specifying that R2DToo’s campground classification is incorrect, and therefore the code violations and associated fines should be withdrawn. Kramer is also calling for all fines already paid by R2DToo to be returned to the group. 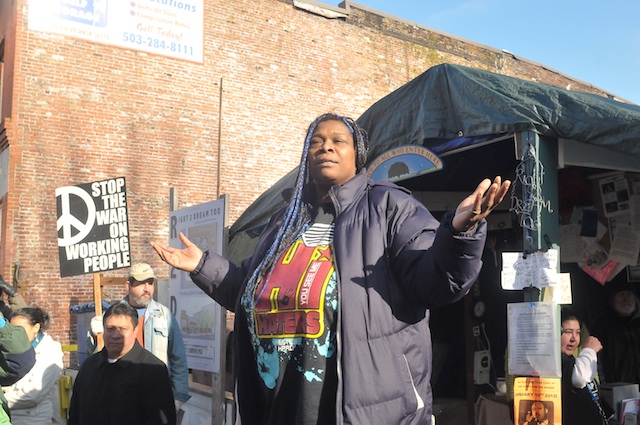 Standing in front of the shelter, Ibrahim Mubarak, Chair of R2DToo, told the crowd that Portland’s City Commissioners “want to destroy something beautiful.” In over 16 months of existence that something beautiful has provided a safe space for houseless people, housing upward of 90 people per day and also helping 40 people find housing and 20 people find work. Mubarak reminded the crowd that King “spoke for all people, not just for people of color, not just for people who live in houses, but for all people. So we’re in solidarity with everybody that this capitalist system is putting down.”

Lucilene Lira of Sisters of the Road reminded marchers that the hurdles facing day laborers and people without housing were just two struggles linked to many others, all leading toward the more just world that Martin Luther King and so many others believed was worth fighting for.

“This corner signifies a resistance to a system that criminalizes and pushes away the poor,” Lira said. “R2DToo defies the system that only helps the rich. Where are the bankers? Are they in jail? Where are the financial system managers? Where are they? No one has been jailed. No bankers. Bank of America, US Bank, Wells Fargo – the financial system who pushed for profit – no one’s in jail. But they want to criminalize poor people who are trying to survive. We need to stop that.”

“It doesn’t cost the city one red cent,” Mubarak told the crowd. “They should pay us. We’re doing their job.” Contrary to the misinformation being spread by the Portland Business Alliance, which recently sent a letter to Saltzman accusing R2DToo of creating “an increase in illegal activities in the area,” there have been no police encounters with R2DToo.

According to Mubarak, R2DToo is doing better than the city at dealing with unhoused people. Bud Clark Commons, which opened one month before his shelter, cost Portland citizens tens of millions of dollars and yet does not seem to boast the success record of the far less glamorous R2DToo.

Ironically, it is that lack of glamour that some claim is the problem. Developer David Gold wishes to turn the Grove Hotel, which sits across the street from R2DToo, into a youth hostel. According to Gold, he and his business partners will only make a profit if the ground floor can be turned into a restaurant; however, he argues that no restaurant will be willing to have R2DToo for its view.

If the consequences of this viewpoint – including the 3 houseless people who died from exposure over the last month – were not so heavy Gold’s complaint could be darkly humorous. As it stands, it’s tragic that Gold is more concerned about restaurant patrons having to see the reality of houselessness, than he is about the rights of the houseless. This stance dehumanizes the people of R2DToo – people like Shelby,a former member who is now a supporter. Or Mama Chewi, an irrepressible optimist who with her fiancee is an R2DToo member. The couple is confident that secure housing is just a few weeks away. R2DToo gives these people a safe space, one that so far has remained out of the clutches of groups like the Portland Business Alliance.

As the crowd readied to leave R2DToo and head to Sisters of the Road for food and entertainment, Lira reminded marchers that they were celebrating both what Martin Luther King achieved and what he should inspire us to achieve. “Dr. King stood up to an entire system of racial discrimination and segregation. We have to fight economic segregation that is tearing apart the community. If we are not able to defend this corner, we are not able to defend our houses, our jobs, our rights.” 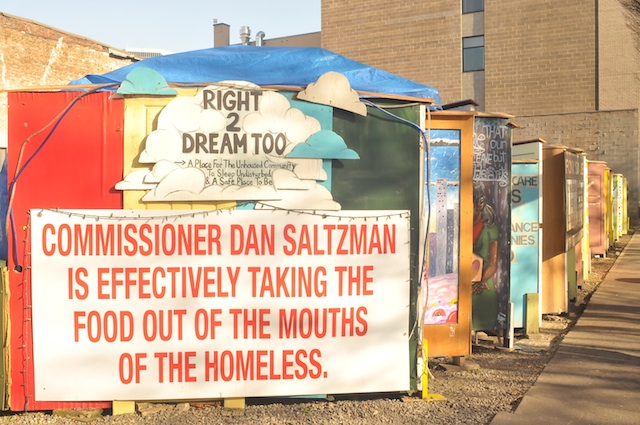