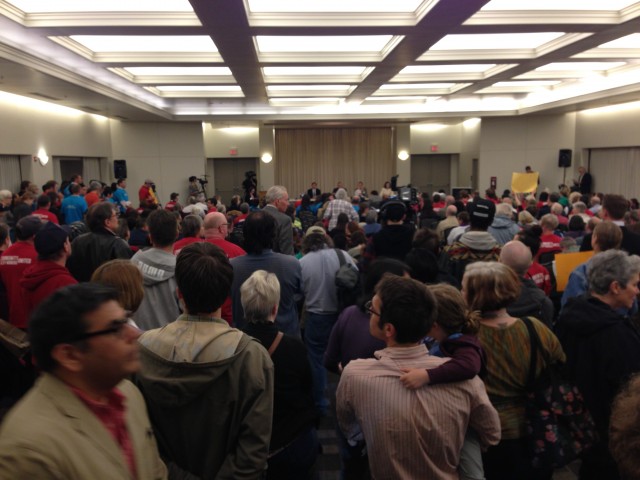 On April 11 over 400 people packed the third public Portland Budget Hearing, which was organized by the City of Portland and which left many spilling out beyond the room where the hearing took place. More importantly, for the City Council there was an unexpected critical outpouring from the vast majority who attended. For the first time, the City Council and Mayor Charlie Hales began to lose control over their attempts to sell austerity.

This was in sharp contrast to business as usual. Portland budget hearings are generally tightly controlled, polite affairs. What are the reasons for this movement towards a more charged polarized event?

Like many U.S. cities since the onset of the Great Recession in 2008, Portland, Oregon has faced several consecutive years of budget cuts at the cost of lost jobs and its communities’ livability. While the politicians promoting these cuts said they were necessary squeezes for a prosperous future, they have only led to more austerity in the subsequent years.

Now the City Council and the newly elected mayor, Charlie Hales, are not only promoting more of the same — they are threatening Portland’s citizens with the most severe cuts yet. We have been told that there is a $21 million hole in the city’s General Fund, according to latest estimates.

Mayor Hales has asked each city department to submit proposed budgets with 10 percent less revenue. These include already underfunded housing programs, community centers, funding for parks, after school programs, youth employment services, and many other services and jobs. It is no exaggeration to say that many lives and Portland’s future are being left to precariously dangle in the wind as the City Council goes through its process of demanding austerity cuts.

The myth that Portland is broke and that “sacrifices have to be made” is meant to leave those facing the austerity ax powerless and divided. However, the deficit in Portland’s General Fund is not an accounting problem. It is a political issue.

This latest budget crisis poses the question of “who does Portland’s elected leaders serve, the city’s majority of working class communities or big business and the wealthy?” So far, while the 99% have been suffering with all the belt tightening, Portland’s 1% have been left to grow fat.

With such results, it is only a matter of time before increasing numbers of people start concluding that “enough is enough.” The city government’s narrowly constructed and carefully controlled austerity narrative, meant to divide and weaken Portland’s working class communities, is beginning to create the opposite reaction to its intended effect. That is, we are seeing the beginnings of a potential united social movement against the actions and threats of the city government that privileges the corporations at the expense of Portland’s communities.

Also attending were members of Jobs with Justice, the People’s Budget Project, and the Solidarity Against Austerity Committee (SAAC). These groups saw the hearing as an opportunity to begin building unity among Portland’s working class communities to oppose all cuts.

Pulling this off required that attendees knew the moment they walked in that the hearing was not going to be business as usual, and that a collective approach towards defending all the programs facing cuts was to be encouraged. A colorful banner over the doors to the hearing room read, “Communities United To Stop Cuts!”

Laborers International Local 483 passed out so many red t-shirts reading “Community & City Workers’ United” that once everyone put them on, it looked like the hearing had transformed into a political rally in Venezuela. Hundreds of stickers were passed out reading “Communities United to Stop Cuts” and “Raise Revenue Not Unemployment,” as well as dozens of placards with the same messages.

In the testimonials, the first volley against the City Council’s austerity rationale was fired by Professor Robin Hahnel, a Portland State University economist. In a calm manner he made several powerful points, including:

When there is still much too much unemployment and no imminent danger of inflation, fiscal austerity is insane! Economic theory predicts it. History proves it. And any competent economist who is not in the service of the 1% will tell you as much.

The City Council’s attempt to cut off Professor Hahnel resulted in a loud protest from the audience. At the end of his short presentation the room erupted in approval, with spontaneous shouts to the City Council of “Go get the money!” In other words, tax the rich. This was the first of several such moments throughout the evening.

Most of the many testimonies of the evening consisted of community members passionately defending the programs they depend on. There were also a large number of statements exposing the myth that Portland is broke. These speakers pointed out the city tax breaks handed out to corporations that, if eliminated, could create enough revenue to close the General Fund deficit and provide an economic stimulus for Portland’s communities.

They argued for raising the rate of Portland’s business license fee for those who are making millions, which is currently only 2.2 percent. They also advocated moving money from the city’s Internal Service Funds (ISF) to the General Fund. The ISF has grown from $68.8 million five years ago to over $106.7 million today, with little transparency about what it is used for. (The U.S. Public Interest Research Group gave the Portland Budget a D- grade for transparency.)

Despite what the council and mainstream media claim, there is no shortage of money in Portland or in Oregon. We live in the richest country in the world, one that has huge concentrations of wealth at the top,” said school counselor and SAAC activist Steven Siegel. “Please do your job and represent the people. Go get the money! Raise revenue! Enough cuts!

Several speakers turned around to directly address the audience, asking them to raise their hands or stand up if they were against all cuts. From this writer’s vantage point, not a single person refused to respond approvingly to the requests.

Far from the passive theater meant to maintain the appearance of democracy, the public Portland Budget Hearing last week transformed into a movement-building event. This was because of a union/community partnership that refused to sacrifice its independence in order to gain favor from politicians. Rather, its aim was to draw out, in the broadest way, the understanding that those threatened by cuts can stand strongest when they stand together. Solidarity is the foundation of the 99%’s strength and it is our only hope towards reversing austerity and the corporate agenda behind it.

As if to underline the urgent need for this development, the next day it was learned that the City Council has been meeting with Nike. Over $80 million in incentives were reportedly being offered to Nike to expand into Portland. Considering that these politicians are threatening the city’s communities with potentially devastating cuts, it is hard to imagine a sharper confirmation that their priority and allegiance lies with high capital. It will take a power stronger than Nike’s billions to set things straight — and that power is visible when our communities’ numbers are united.

Mayor Hales is scheduled to announce the initial detailed budget proposal on May 1, and May 16 will be the last public hearing. On July 1, the final budget is scheduled to go into effect. There is much grassroots work that needs to be done to promote a people’s budget that will turn austerity around. But we are off to a promising beginning.

And the potential impact of developments in Portland has a national scope. As cities across the U.S. face similar cuts, with both major political parties lining up to cut Social Security and Medicare, it is clear that only we, the people, can save ourselves and reverse the direction the country is going. In Portland, there is a chance to wage a comeback that can win. And any such example could prove infectious.

Mark Vorpahl is a union steward, social justice activist and a writer for Workers Action and Occupy.com. He can be reached at [email protected]

1 comment for “Opposition Grows Fierce to Austerity Cuts in Portland”