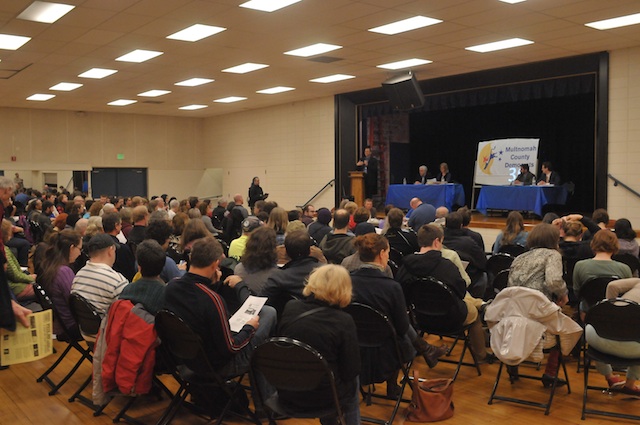 The Portland City Council unleashed a torrent of community activism last September when it unanimously voted to fluoridate Portland’s drinking water. Within a month, anti-fluoridation group Clean Water Portland delivered more than twice the necessary signatures to refer the issue to the ballot, where, on three previous occasions, Portland citizens have defeated water fluoridation attempts. In December, City Council – in a move widely condemned as a circumvention of public process – moved the vote up to May, a time of year when low voter turnout could swing toward those favoring fluoridation.

On April 10, a Multnomah County Democrat-sponsored debate drew a crowd of over 200 to the Matt Dishman Community Center to listen to representatives from Clean Water Portland and pro-fluoride Healthy Kids, Healthy Portland field questions on this contentious issue.

The debate featured introductory and closing statements and two sets of questions – one from Multnomah County Democrats and a second from the audience. The answers themselves disclosed little new information to those who have been closely following the story; however, it was interesting to watch the strategies on display. Distilled down, the debate centered around pro claims that the science is on their side, while the nays say that emerging science suggests there may be serious health concerns associated with water fluoridation.

Mike Plunkett, Dental Director for Care Oregon and Neighborhood Health Center, and assistant professor of Community Dentistry at OHSU, began with a story about treating a young girl with an abscess who had been unable to eat on one side of her mouth for two months. Plunkett cited the tale as just one of many stories that prove to him that water fluoridation would be helpful. He then asserted that among the underlying issues of this vote are whether or not Portlanders are “willing to implement solutions that benefit the entire community” and if “we respect science.” Plunkett’s message was echoed by Alejandro Queral, Program Officer at the Northwest Health Foundation, and an appointee to Oregon’s Public Health Advisory Board.

Like Plunkett and Queral, Kellie Barnes, founder of Core Physical Therapy and a doctoral candidate in orthopedic manual therapy, and Rick North, the founder and project director of the Safe Food Campaign for Oregon Physicians for Social Responsibility, say they too believe in respecting science and creating healthy community. The pair do not, however, agree that fluoridating Portland’s water supply shows a respect for emerging science, and that it may possibly create a sicker community.

Plunkett and Queral often referenced the numerous “trusted” (trust, as a parenthetical expression, is often cited in pro-fluoride literature) authorities – the National Academy of Sciences, the National Institute of Health, the Centers for Disease Control and Prevention – that support fluoride. Their other main strategy was to cast aspersions upon Barnes and North for standing in opposition to these groups. At one point Plunkett commented on Barnes’ reference to “new emergent science,” questioning if it was valid science. He then told the audience that he was “not going to listen to a physical therapist,” but rather to experts.

Plunkett’s argument to leave it to the “experts” seems obfuscatory in light of the 2006 National Academy of Science report Fluoride in Drinking Water, that, while noting the beneficial effects of fluoride in dental health, also raised concerns about other potential effects, including increases in bone cancer, severity of some types of diabetes, endocrine disruption and negative effects on brain and thyroid function.

Plunkett later alluded to these concerns as cherry-picked, but this is not a fair assessment. A more accurate reading of the NAS report is that most concerns against water fluoridation are associative and need further study, particularly because, while the NAS report examines fluoride studies, those studies do not particularly address fluoride added to drinking water.

For example, on diabetes the report says, “The conclusion from the available studies is that sufficient fluoride exposure appears to bring about increases in blood glucose or impaired glucose tolerance in some individuals and to increase the severity of some types of diabetes.”

On kidney function: “…it is important to consider subpopulations that accumulate large concentrations of fluoride in their bones (e.g., renal patients),” and also notes “From an immunological standpoint, individuals who are immunocompromised (e.g., AIDS, transplant, and bone-marrow-replacement patients) could be at greater risk of the immunologic effects of fluoride.”

On cancer: “Fluoride appears to have the potential to initiate and promote cancers, particularly of the bone, but the evidence to date is tentative and mixed.”

On brain impairment: “Fluorides also increase the production of free radicals in the brain through several different biological pathways. These changes have a bearing on the possibility that fluorides act to increase the risk of developing Alzheimer’s disease. Today, the disruption of aerobic metabolism in the brain, a reduction of effectiveness of acetylcholine as a transmitter, and an increase in free radicals are thought to be causative factors for this disease. More research is needed to clarify fluoride’s biochemical effects on the brain.”

The article supports one of the primary and most powerful rejoinders from those against fluoridating Portland’s water: If the science points to the possibility that fluoride has deleterious effects on people, why should it be added before we know for sure, if at all. In other words, do the citizens of Portland want to be guinea pigs? Plunkett is correct when he asserts the science – proof, not association – is not there for people opposed to fluoride, but it would be incorrect to state that opponents are using scare tactics devoid of any scientific basis.

This point was underscored when Plunkett asked Barnes and North for a study that showed the effect of fluoride on people with “chemical sensitivity,” a point that Barnes and North hit upon throughout the debate. Barnes responded that she could not provide a study because, as noted in the NAS article, no studies have been done, and that deficit is precisely why it is wrong to artificially introduce fluoride into Portland’s water supply.

One audience member asked both sides to respond to the observation that only 22% of Oregonians have access to fluoridated water, yet some states with higher rates of water fluoridation have higher rates of tooth decay. Plunkett responded by saying children were susceptible to dental decay for many reasons, such as income levels, so he suggested comparing Seattle, which fluoridates its water, with Portland. Seattle area children have less incidence of decay than those in Portland. But North called the comparison unfair, because Seattle’s health care system reaches more kids. Plunkett responded that more dental problems are treated in hospitals in Portland than in Seattle, which he said takes a more diagnostic approach to dental hygiene.

Plunkett and Queral were clear that fluoridated water is but a “cornerstone” of a program that includes the usual regular flossing and brushing, and the privileged visits to the dentist. All four agreed that it was important to advocate for increased access to dental health care, a fight certainly worth taking up once the ballots are counted.

It appears that a major problem facing pro-fluoridation groups is that they have focused much of their energy on the importance of fluoride to children. Groups opposed to fluoride have been able to turn this around by spotlighting possible health ramifications that not only affect children, but adults and other lifeforms. After all, animals and plants consume water too. The sense that their ace in the hole was being used against them appeared to be a point of frustration for Plunkett and Queral, who were forced to repeatedly affirm what seemed to them irrefutable.

While the hard science on fluoride as it pertains to teeth may be on the side of those supporting water fluoridation, it is this group that appears to be “pushing the river”. As noted, Portland’s citizens have thrice rejected fluoridation and it is a common boast that our community has the purest water around. Furthermore, while pro-fluoride talks dental health benefits, those opposed can point not only to the contamination of our pristine supply of water, but also to the numerous potential hazards fluoride may wreak on human health.

By debate’s end, it appeared that if any gains were made, it was on the side of those who want to maintain fluoride-free water in Portland. At the end of the day they may just have the easier job: cast doubt. It was a strategy Barnes and North were effectively able to deploy during the evening and, while it may not be good science, it seemed to be a winning point.