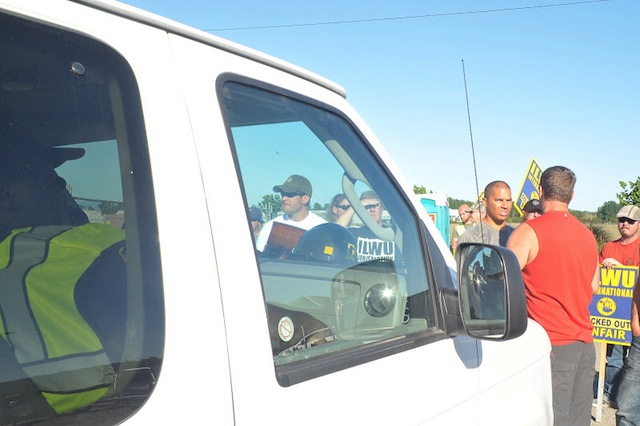 Columbia Grain locked out ILWU Local 8’s grain handlers on May 4 in Portland, accusing them of “engaging in inside game’ tactics, including slowdowns, work-to-rule, and demands for repeated inspections of the same equipment – all designed to negatively impact Columbia Grain’s operations.”

Late the next day, twenty of the union members along with local supporters gathered at the entrance of Terminal 5 in protest of the lockout, which comes a little over two months after United Grain locked out ILWU Local 4 grain handlers in Vancouver, Washington.

Since last Fall when the Pacific Northwest Grain Handlers Association began contract negotiations, Columbia Grain has had at the ready union busting company JR Gettier & Associates. Columbia Grain, along with United Grain, is seeking to impose upon the Locals 4 and 8 grain handlers the same contract that was signed by the grain handlers in Longview’s Local 21, a contract widely perceived to have given away too much to the grain companies. 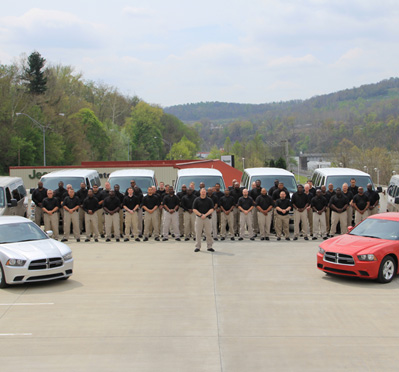 Gettier’s “Team Strike Force” is at the Port of Portland. Photo from Gettier’s website.

The charges leveled by Columbia Grain against the ILWU deserve scrutiny.  For example, the Occupational Safety and Health Administration (OSHA) requires that equipment be inspected every day and that equipment not working up to OSHA standards must be repeatedly inspected and tested until it conforms to OSHA regulations. What Columbia Grain is calling a work stoppage is a case of workers following OSHA guidelines. “It’s clear they don’t want to follow labor laws or OSHA,” said a longshoreman, “when they think that safety inspections are inside game tactics and that they can lock out workers who are there to work in a safe and effective manner.”

As the morning shift left the terminal, protesters stood in front of the caravans with scab laborers on board. Earlier the Portland Police, claiming an interest in both the rights of the union and the grain companies, allotted protesters five minutes to delay entrance to and egress from the terminal. Around 5:40 pm two vans with seven scabs, all covering their faces, arrived for the evening shift. Security provided by JR Gettier constantly filmed the five minute encounters.

According to a few ILWU members, Columbia Grain says it negotiated with the union to allow members and supporters to park and set up picket lines as they did. “We are supposed to be under the impression that Columbia Grain, out of the goodness of their heart, allowed us to park here,” said one longshoreman. 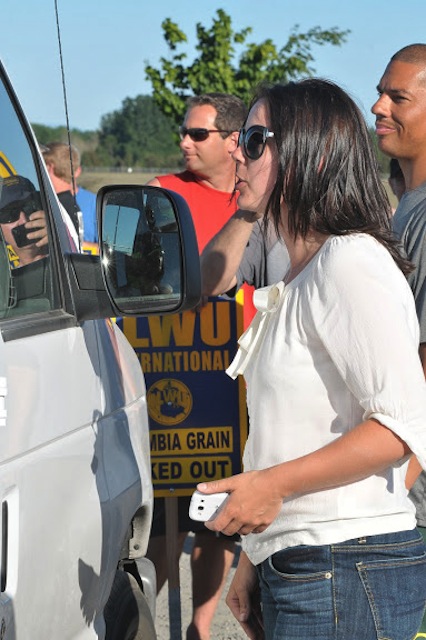 According to one protester, when the police enforced the five minute rule, they said they had to take into consideration the rights of the property owners, that is, Columbia Grain. However, Columbia Grain does not own the property which is part of the City of Portland and currently classified as vacant land.  In most picket lines not on private property, protesters, while not allowed to stand in place, can walk in file, a tactic that can disrupt traffic for more than five minutes.

When a truck driver arrived from Jubitz with fuel for the portable lighting near Gettier’s security gate, he was confronted by protesters and, feeling sympathetic, called for advice. He soon turned around, making him the second truck driver that day who did not cross the line. The first, from Ferrell Gas, honored the picket line earlier in the day. These were small but notable victories, and could prove pressure points that the ILWU and its community supporters can exploit. Companies like Jubitz do not want to get involved in a union dispute that could result in Teamsters choosing to fill up elsewhere.

As with previous disputes along the docks, the overarching question that arises is: who owns the port? Columbia Grain wants the public to believe it owns Terminal 5, but the ports are funded with taxpayer dollars. Columbia Grain, as with United Grain in Vancouver, has taken citizen tax dollars funding the Port of Portland and is now repaying them by trying to force local workers to accept a contract that will harm these workers, their families, and the community.