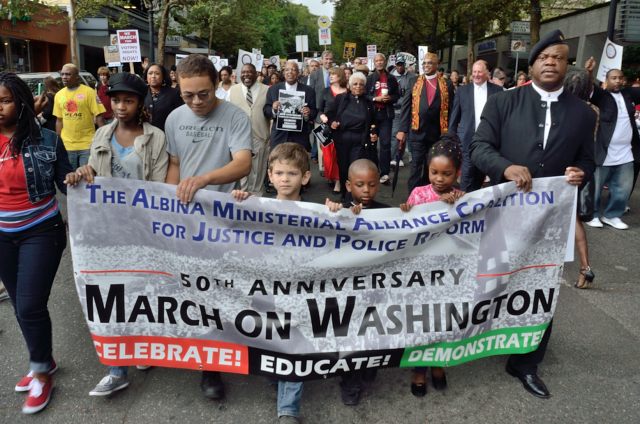 When Barack Obama took the podium at the 2004 Democratic National Convention, the then Senate candidate from Illinois told the nation, “There’s not a Black America and White America and Latino America and Asian America. There’s the United States of America.” It was an affirmation of the myth of inclusion, hardly unique to that moment in time, and the myth, particularly with Obama’s election and reelection to the presidency, continues.

One need not look too far to see the reality that belies the myth. Of most recent prominence on the national stage was the acquittal of George Zimmerman, a verdict that, according to an ABC News-Washington Post poll, was deemed correct by White people by 51-31 percent, while among Black people the verdict was disapproved of by 86-9 percent. On the larger plain of the criminal justice system, the poll found that 86 percent of Black people believe “Blacks and other minorities do not receive equal treatment as Whites” while only 41% of White people subscribe to this belief, despite documentation of bias against Black people in the US criminal justice system.

Another glaring example is New York City’s Stop and Frisk policy that was declared unconstitutional by a federal judge on August 12, 2013 because of its reliance on racial profiling of Black and Latino people. Since 2008, the New York City police have stopped anywhere between 530,000 and 685,000 people annually. Of these stops, Black people made up about 53 percent of the stops, while Latinos composed about 32 percent. White people accounted for 10 percent of the stops. (Data is at: http://www.nyclu.org/content/stop-and-frisk-data). In about 89% of all cases, no weapons or contraband have been found, and when these items are discovered, White people were most likely to possess them. Yet the policy continued to focus on the Black and Latino communities.

Locally, the Portland police have incurred a reputation for gunning down People of Color and rarely being held accountable.

The list goes on. Prison populations, people in poverty, people losing their houses, people unemployed–these statistics all skew toward People of Color, putting lie to a 2011 survey Tufts/Harvard survey that found White people believe they are the primary victims of racial discrimination.

In short, the idea of there being only one United States of America is bunk, albeit comforting bunk for some. It was the same 50 years ago when on August 28, 1963 Martin Luther King spoke at the March on Washington for Jobs and Freedom. The “Jobs and Freedom” part came to be overshadowed by King’s “I Have a Dream” speech, and it is that Martin Luther King we are supposed to remember. As Gary Younge recently wrote in The Nation, the speech “has been cast not as a searing indictment of American racism that still exists, but as an eloquent period piece articulating the travails of a bygone era.”

After King’s assassination, the ways to remember him, at least according to the dominant narrative, were and still are limited. The King who in 1967 called the United States “the greatest purveyor of violence in the world today” and who also believed government needed to take a greater role in helping the poor and oppressed must necessarily be ignored by those in power because the country still holds the mantel of violence and–outside of maintaining that violence–has diminished the role of government. 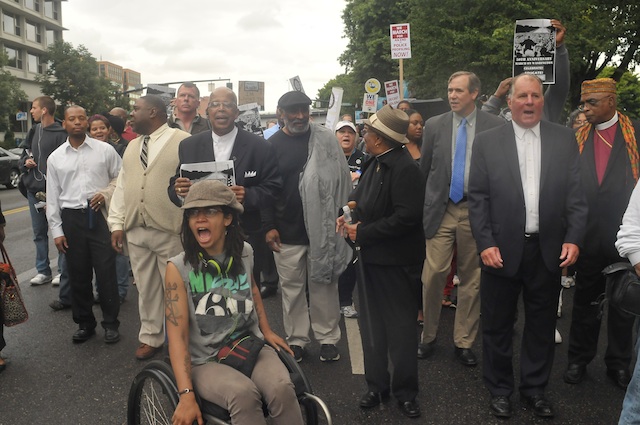 Though King evolved and became an even more complex human being, his speech remains a touchstone of our culture, pointing a way forward to a world where the arc of history would meet justice. This spirit was apparent on Saturday August 24th in Chapman Square when over 500 people gathered to march to Waterfront Park where a larger rally in remembrance of the Washington March was held. People of numerous ages and ethnicities showed, including LGBTQ activists, Labor groups and various denominations of worship. People came to remember a great person who in both word and deed helped bring together the tens of thousands of people–none so famous as King, but all ultimately as important because without them King would have just been preaching in the wind–to keep pushing that arc.

What might have otherwise seemed like a mishmash of signs, devoid of both rhyme and reason, became utterly sensible in the context of the day. Demands for justice so as to prevent future Trayvon Martins and Kendra Jameses fused seamlessly with Longshoremen demanding an end to the lockout of their grain handlers. AFSCME Local 189 workers (among the seven unions represented by the District Council Trade Unions demanding the city bargain in good faith) made logical partners with the NAACP and the Urban League of Portland. Those in opposition to the school-to-prison pipeline marched easily next to people from Right 2 Dream Too.

In this solidarity, there was a great sense of possibility. More and more, people seem to be understanding that helping others in their struggles is not simply a matter of charity, but a path to a world that will benefit them too. There are always backward steps. Witness the Supreme Court’s rollback of the Voting Rights Act. Witness the way the defense was able to turn George Zimmerman into the victim while painting Trayvon Martin, and ostensibly all young Black men, as threats. Witness the attacks on the poor and working class who are bearing the burden of the economic mess while those who created it go largely unpunished.

Perhaps that is Martin Luther King’s greatest legacy: possibility. Where the arc and justice meet seems far off because it is. But just as King knew it was closer in 1963 than in 1913, it is closer today than it was 50 years ago.

SH/”M’M”–Thank you for the days 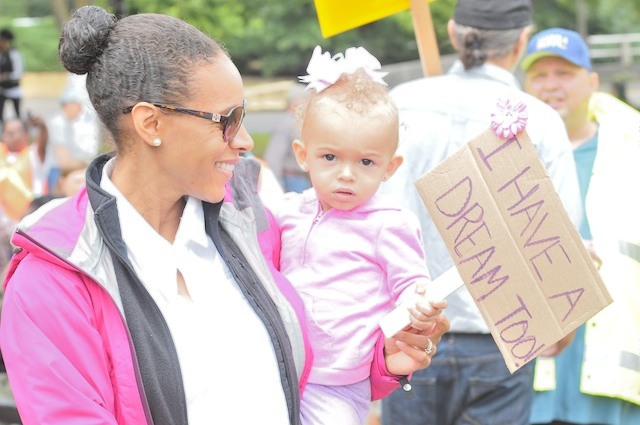