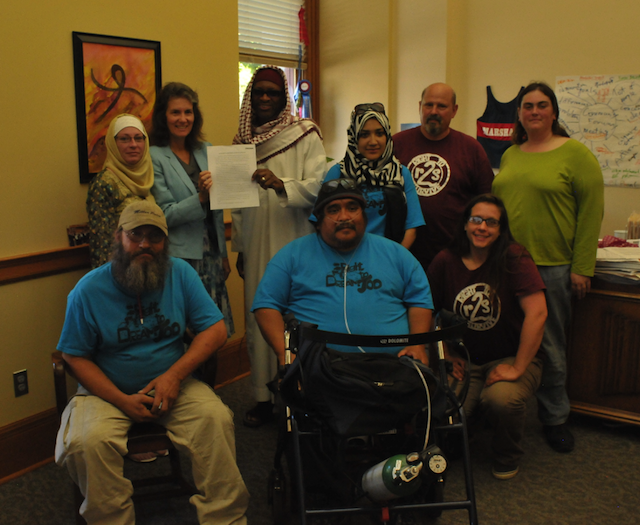 Representatives of R2DToo met with Commissioner Amanda Fritz in her office. Photo by Pete.

Right 2 Dream Too (R2DToo) has found a new home. The rest stop for people without housing whose successful model has helped people find not only rest, sanctuary, and safety, but jobs and housing has reached an agreement with Bureau of Development Services (BDS) Commissioner Amanda Fritz that will see it moving from its current home on West Burnside to a parking lot under the Broadway Bridge. The settlement, announced at a recent City Hall press conference, also waives the nearly $21K in unpaid fines for violating “recreational” camping rules that the city levied against Michael Wright, Linda Cossette, Daniel Cossette and Donna Cossette, who own the land R2DToo has been leasing for nearly two years.

R2DToo was a decided underdog in its fight with the city. Clearly it does not have the city’s financial resources. But it does have numerous allies including Dreamers (those who have used R2DToo’s facilities), supporters who believe housing is a human right, and housing justice advocates, all of whom have worked together to educate others about the people who make up the houseless community and the successes of R2DToo. According to R2DToo co-founder Ibrahim Mubarak, 71 Dreamers have found housing and 73 have gained employment. Additionally, 6 Dreamers are now furthering their education, 10 have completed drug treatment programs, and 5 women who have given birth while staying at the rest area have kept their babies. All this has been done without public funds, and not a single police intervention at the site. In fact, since R2DToo established itself, crime in Old Town has decreased. Though it is unclear if there is a direct correlation between the statistics and the rest area, clearly R2DToo stands in contrast to the stereotype that people without housing are criminals.

Nonetheless, under Commissioner Dan Saltzman, who headed BDS until Fritz recently took its helm, the BDS imposed fines on R2DToo, claiming it was an unpermitted recreation park-campground in violation of Oregon Administrative Rules 918-650-0020 and 918-650-0025. On December 10, 2012, International Human Rights Day, R2DToo filed a complaint against the city seeking a full waiver of the fines, and on July 11, represented by National Lawyers Guild attorney Mark Kramer, R2DToo appeared at a hearing before Judge Karin Immergut, asking for a decision as to whether R2DToo’s status as either a rest area or campground should be decided in civil court or remain administrative. Surprisingly, Immergut delayed reaching a decision seemingly based on the compelling arguments of the plaintiffs. Although prepared to rule a couple of weeks later, she withheld her ruling at the request of the parties pending the result of negotiations for a political solution.

Clearly realizing the imminent failure of Multnomah County and the City’s ten year plan to end homelessness by 2015, Fritz saw that R2DToo represents a viable alternative to previous houseless solutions, one that is founded on “self-government and good management.” Fritz noted that over 1800 people in Portland are living outside, including “women fleeing violence, veterans, and people thrown out of their houses for their sexual orientation.” She added that while Portlanders are generous with their taxes, the City simply lacks the money to help all houseless people. One might argue that what is really lacking is the political will to ensure housing for the houseless, but, regardless, Fritz sees R2DToo as a bridge toward one day solving the houselessness crisis.

R2DToo is a home–a community–for people without housing. Kristin Everett, a Dreamer, who joined Mubarak and Fritz at the podium had come to Portland with her boyfriend from Seattle with jobs and a place to stay “lined up.” But the jobs fell through and the place to stay subsequently became a rotating series of “bushes and doorways” until she found R2DToo. “You can come in there,” she said, “and lay your head down…I love how simple and inclusive it is.”

To many of the Dreamers, it seems that if the City Council (outside of Fritz) and the Portland business community had its way, R2DToo would be shunted to some out of sight/out of mind spot such as Dignity Village’s location near the airport. This would hardly solve the problem of houselessness, but it would help those who value profit over people sleep better at night, knowing potential customers will not have their shopping interrupted by the sight of those less fortunate than themselves. 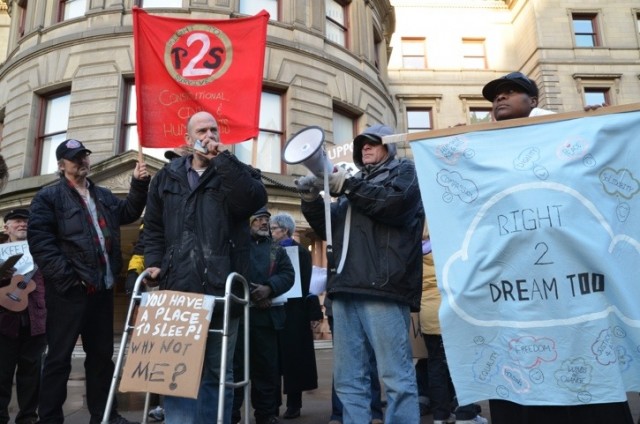 R2DToo resident talks about having a warm tent to sleep in. Photo by Paul.

But R2DToo did not come into existence to cater to the business community; it’s sole purpose is to provide a place where people without housing can get back on their feet. In doing so, it shines a light on the real faces of the houseless–people in Portland who, like so many others throughout the country, are only one paycheck away from falling into houselessness. In their case, the one paycheck eventually did not come. They are neighbors, they are friends, they are veterans. They are struggling, and thanks to R2DToo, many of them are succeeding. As Mubarak noted, when the Dreamers “were allowed to do good for ourselves,” they showed they were “human just like everyone else.”

Throughout the negotiations Commissioner Fritz has been truly interested in the welfare of the people using R2DToo. At the press conference, Fritz’s language was humane and nurturing, standing in stark contrast to language that has treated them as sub-human. A reporter from the Oregonian asked Fritz if the city would be held liable if there was a rape or murder at the new site. It was a question all too typical of the assumptions people have about people without housing (as well as people in poverty and People of Color). The question came after both Mubarak and Fritz had cited that in R2DToo’s nearly two years of existence, never once have the police been called to the site. What would the reaction be if the City Council began discussing liability issues should a banker–or an Oregonian reporter–commit rape or murder in the Pearl District urban renewal zone?

This settlement is a victory both for R2DToo and people without housing, and it is a testament to the power of grassroots organizing. Outside of City Hall, Greg Margolis, R2DToo supporter and member of Portland Jobs with Justice, excitedly stated, “It is extremely inspiring that a group of some of the most marginalized members of the community created a democratically self-governed organization operating on a shoestring budget and with perseverance in their message and a successful model, essentially forced the city to acknowledge it’s own failures and accept the value of a bottom up organizing structure. Very David versus Goliath stuff.”

However, unlike Margolis’ biblical allusion, there are likely more Goliaths readying to fight R2DToo. Already there are questions about the city possibly breaking zoning rules in allowing the new site for R2DToo. And according to the settlement, the agreement is for “ R2DToo’s temporary use of City controlled property.” That temporary period is one year. Although the settlement also calls for the City to “make good faith efforts to find R2DToo an alternative location for its activities,” just what qualifies as a “good faith effort” remains to be seen. Considering that over the past two years the City saw fit to levy over $20K in fines in what was nothing short of a callous effort to remove vulnerable people whose lives were deemed less important than possible profts, it seems it will behoove R2DToo and its supporters to continue their organizing.

And as always, people without housing must combat the stereotype of  being lazy, thieving drug users and whatever other negative attributes too many people unthinkingly attach to them. If one scans the comments section at the bottom of internet articles dealing with R2DToo, one finds numerous entries portraying the stereotype.

Over the next few weeks, Fritz will be conducting outreach with Pearl District neighborhood organizations regarding R2DToo’s new home. Among her jobs will be showing people that the Dreamers will be good neighbors, just as they have been at 4th and Burnside.

And this will also be the job of the Dreamers and their supporters. It is a task that Kristin Everett relishes. “I’m real excited,” she said, “to dispel the fear that many people have about us.”

Right 2 Dream Too has meetings every other Thursday at the Sisters of the Road Cafe, located 133 NW 6th Avenue.

Want to provide support for Right 2 Dream Too?

2 comments for “Right 2 Dream Too Has a New Home”