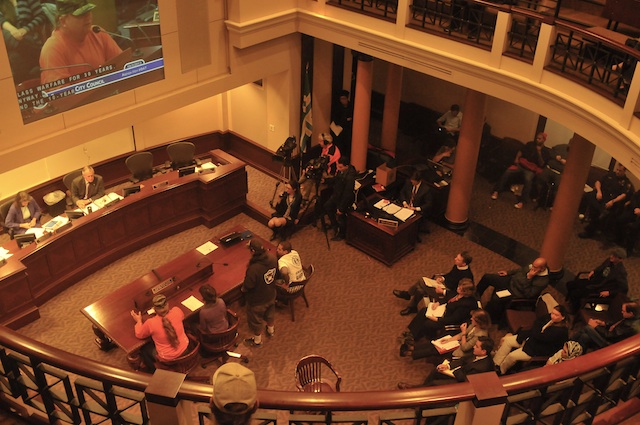 Since Right 2 Dream Too (R2DToo) and the City of Portland came to an agreement in July to move the rest area for people without housing to a spot in the Pearl District, those opposed to the move have been trying to walk a tightrope. On the one hand the opposition is worried about falling rents, diminished property values, and safety and on the other they want to avoid the NIMBY label and being perceived as soulless creatures who do not care about the plight of those not so fortunate as themselves. But in case anyone thought the breast beating of the business community and the leaders of the Pearl District Neighborhood Association (PDNA) had some measure of authenticity to it, that misguided notion should have been put to rest at City Hall around 7:15 pm, on October 3rd.

The 91st person to give testimony before the City Council regarding R2DToo’s move asked for a moment of silence in memory of people without housing who have recently died. Most people in the chamber rose and bowed their heads in respect. Approximately 12 people who had already testified against the move remained in their seats against the back wall. In that moment–when even a shred of common decency would have gone a long way–their farce was exposed.

On this October 3rd, during the course of over four hours of testimony, about 100 people spoke in favor of or in opposition to the move. The difference in the language between the two sides was striking.  The business and Pearl people spoke the language of fear, as well as the callously indifferent language of bottom lines and lost profit opportunities. They were cold and bloodless, expressing compassion only for themselves.

The first six speakers were from Station Place Tower, which stands near where R2DToo will move, and they all sounded the safety alarm, warning of the Mongrel Hordes at the gates. “How long before someone sneaks into a warm building or steals a purse?” “Now walking to the Amtrak or the Greyhound will be more daunting.”  “Those of us on limited income cannot afford to keep moving just so we can find a safe place to live.”

A few opponents tried out the human angle. One woman trotted out information about “pigeon guano” and its dangers, inclusive of CDC handouts for the commissioners regarding how to properly clean it. The fungi within the guano would be dangerous to the people of R2DToo, she said,  as it accumulates under the bridge. In what seemed an attempt to embarrass Commissioner Amanda Fritz and cast aspersions on her competence, the woman asked–since she was formerly a nurse–if Friz could properly pronounce the name of the fungi. The commissioner gracefully replied, “I was a psychiatric nurse.”

Some other people tried the health card, but the pigeon guano was about the last appeal opponents made on grounds that had a slight veneer of humanity. It was fascinating to witness people expressing so much interest in making sure bird crap is treated properly, but have no problem treating their fellow humans like shit. That point was hammered home by Tequilam, who has not had housing for almost two years, when he chastised opponents of R2DToo’s move. “For people to say they are worried about health concerns,” he said, “when you were walking over me, did you care then?  You should be goddamned ashamed of yourselves.”

Shame was hard to find, although it was on occasion placed upon the houseless and their supporters. One member of the business community said, “Their argument is one of class warfare, and I find it offensive.” He also said that calling R2DToo a “community service”–a term of importance to the city code, and one sanctioned by Paul Scarlett, director of BDS–is “intellectually dishonest at best and a bald faced lie at worst.”

Greg Close, president of a real estate firm representing Ziba Design, shared his pain as well. “You have created class warfare…you are making me feel great apprehension in speaking on behalf of my friends economically.” Close later told a story about a chiropractor friend who was going to lose her business if R2DToo moves in nearby. A person in the crowd noted it was no small irony that Close and the other opponents were actually creating business for chiropractors by trying to put their boots on the necks of the houseless, or as Close referred to them, “These people.”

Process and code were constantly called into question.  Patricia Gardner, President of the Pearl Neighborhood Associaiton noted that the purpose of the city code is to “create certainty and safety for everyone,” although she failed to elaborate on the certainty and safety in the lives of people who lack housing.  At one point developer Homer Williams looked like he was about to burst into tears because he might be unable to use money and its attendant influence to get his way. It may have been the only genuine moment of emotion by anyone opposed to R2DToo’s move.

Finally, there were the outright rude, even cruel. Nothing says hate like telling people their lives are not as valuable as parking spaces, a judgment offered up in both qualitative and quantitative terms. Despite all evidene to the contrary, R2DToo was also called “a failure” and it was implied that all the Dreamers are “ex-convicts and sex offenders”. One speaker compared R2DToo to a nuclear dump and then wandered down some dystopian alley in the Pearl where children, who “pick stuff off the sidewalks,” fall prey to an outbreak of hepatitis. 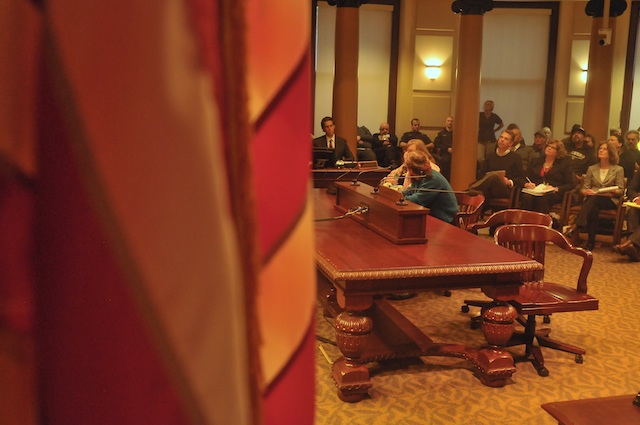 For the most part, Dreamers and their supporters stuck with more nurturing tones. They spoke of support and friendship, and not just among themselves. They also expressed a desire and willingness to share this with the very people who were trashing them. Melissa, who has recently found housing, showed off her six week old child, James; both are success stories. One woman who was assaulted twice while living on the street, expressed her gratitude for R2DToo. Many said the rest area saved their lives or preventing them from being raped. These and other similar testimonies were greeted with stone faces from opponents.

One Dreamer, who goes by the street name Dikweed, was not as charitable in his words, saying he was disturbed by the bigoted language that had associated him with toxic waste. “I deserve to have a place to sleep,” he said. “I don’t deserve to have rich white people tell me where to sleep.” Addressing the soft pedal bigotry of falling property values, he talked about how people in the Pearl District had a choice. They could keep treating people without housing as sub-human, or they could treat them as they would other neighbors. “It’s your hatred that drops values,” he told them. “If you hate then your property value goes down. And that’s called justice.”

The zoning confirmation required by City Council to seal the R2DToo move was postponed until October 16, in order–according to Mayor Hales–to seek an outcome that’s not a “zero sum game”. During his testimony, Homer Williams, who has made untold sums capitalizing on development in the Pearl, asked that he be given time to provide a solution. In his summation the Mayor expressed interest in finding out more about what Williams has in mind. Commissioner Fritz said that any discussions must include R2DToo, since they had the greatest understanding of their own needs.

During the evening a few R2DToo supporters looked forward to a day when this would not be a fight between “us and them.” That is a worthwhile sentiment, but it requires “them” to see “us” as people. If yesterday’s testimony in opposition to R2DToo’s move represents the feeling of the entire Pearl District and the business community, then that day is still far away.