The Portland City Council will be hearing testimony this Thursday, October 3, as it considers granting Right 2 Dream Too a permit to continue its work helping people without housing at a new location. The group is planning a move from West Burnside to NW Lovejoy Court and NW Station Way, under the ramp of the Broadway Bridge. At its Burnside home R2DToo has not only served as a rest area for people without housing, but has also proved a pivotal transition point in many people’s lives for nearly two years.

According to an R2DToo press release, the Dreamers have “as a community” approved the move that will provide “a roof over our heads (the off-ramp itself), a paved lot for wheelchair users, a quieter location, and of course, the economic relief provided by the cancellation of more than $20,000 in fines.”

At a press conference held on September 9, R2DToo and City Commissioner Amanda Fritz announced they had reached an agreement regarding R2DToo’s future. During the press conference, Fritz recognized the great success of R2DToo’s model, which includes 71 Dreamers finding new housing and 73 getting jobs, all without public funds.  The Bureau of Development Services further acknowledged R2DToo’s important role on September 26, when BDS Director Paul L. Scarlett confirmed that the zoning for R2DToo’s new home should be classified as a “Community Services use.”

However, other forces within the city are saying, “Not In My Backyard.” In particular, the NIMBY contingent includes the Portland Business Alliance (PBA)–which has opposed R2DToo from the moment it set up its rest area–and the Pearl District Neighborhood Association (PDNA). On September 12 the PDNA allocated $10,000 from its “rainy day fund” to take legal action against R2DToo’s move, and the PBA has come out against the relocation.

In an article in the Portland Business Journal, Real Estate Daily editor Wendy Culverwell noted “a coalition that includes Hoyt Street Realty, Williams & Dane Development Co. and Ziba Design” wants to blow up the deal between R2DToo and the City, and also wants “to stop being painted as wealthy developers unconcerned with homelessness.”

As part of the effort to show that concern, Culverwell wrote about how Hoyt Street Properties has an agreement with the city that “calls for it to set aside at least 30 percent of the 2,700 residential units it plans to build for low-income residents.”

Later in the article, such truths come forth. Greg Close, president of a real estate consulting firm representing Ziba Design, said, according to Culverwell, that “the camp will chill property values, hinder leasing efforts by design firm Ziba and others and depress rents by as much as 15 to 25 percent.” Close also said property owners might sue to recover their losses. Another person from the business community expressed worries about how a “homeless camp across the street could in theory harm” the Marriott Hotel set to open in the Spring. 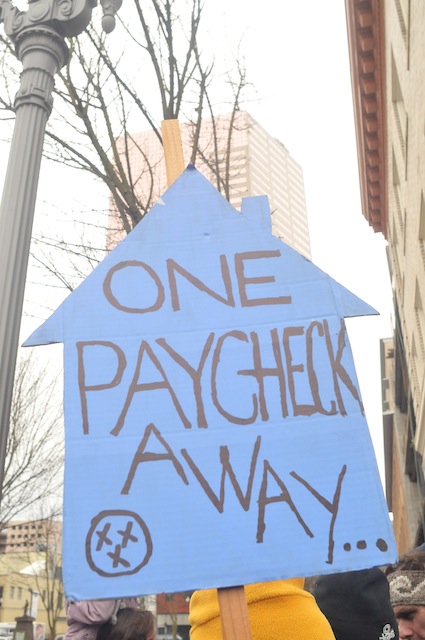 Right 2 Dream Too has lasted because it has been effective in organizing people who understand there is something fundamentally wrong with denying shelter to people without housing. For some, that understanding is based on something as beautifully simple as compassion for a fellow human. For others, it is a belief that the innate value of a person is always greater than the price placed on a piece of land. So far, it has been the coming together of a community of people who have proven more powerful than the money mustered by the likes of the PBA and the PDNA.

Wherever you may stand within that spectrum, come out to City Hall and let your voice be heard. For nearly two years, the Dreamers have been effectively treated as non-legal persons, and despite protestations to the contrary, the business community’s support for various permutations of sit-lie laws has shown its rhetoric regarding its concern for people without housing has been hollow for much longer than R2DToo’s existence.

This week marks a pivotal day for R2DToo and all people without housing, as well as for those who value people over profit. The PBA and the PDNA will be sure to have many representatives there. Where will you be?