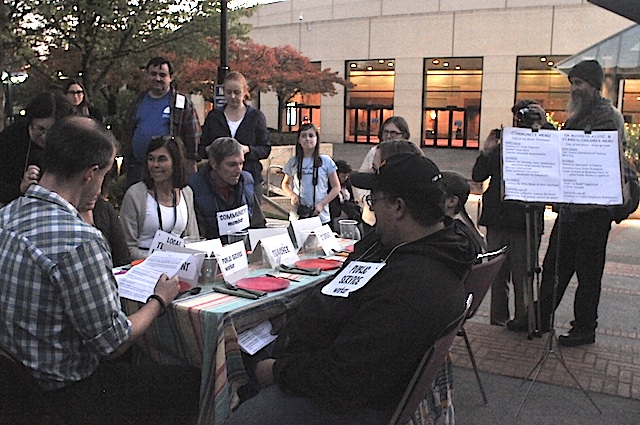 The Oregon Business Association (OBA) held its annual Statesman Dinner on October 17 to honor the Statesman of the Year. The event was fraught with anomalies, not least of which was the fact that the award went to Sue Levin, the Executive Director of Stand for Children Oregon.

According to the OBA website, while Levin is acknowledged as a woman–a stateswoman to be precise–she still had to make due with receiving the Statesman of the Year award. It was nonetheless, from the OBA’s perspective, a proper and well-deserved award. After all, Stand for Children works tirelessly to turn the public education system into a cash cow for private interests, as one would expect from an organization whose major funders include the Walton Family (of Wal-Mart fame) and the Bill and Melinda Gates Foundation.

The far larger problem, represented by Levin’s organization and the Oregon Business Association, is the damaging effects of corporate influence on Oregon’s government and subsequently on its education system and other public services. By the standards of the OBA, just about everyone who mattered was in attendance, including a Who’s-Who of Oregon politicians such as Governor John Kitzhaber and Senators Jeff Merkley and Ron Wyden.

Left uninvited were the rest of the people of Oregon. Democracy was not offered a seat at the table. But while not seen or heard inside, over 40 people gathered outside to declare that The People and not corporate lobbyists should be the ones making the decisions that affect the lives of Oregonians. The protest, organized by educators, students, parents, and other community members and organizations including Oregon Save Our Schools, Solidarity Against Austerity, the Cleveland High School Student Union, the Badass Teachers Association, and The People’s Budget Project, called attention to the lack of public input in government decisions.

“State representatives and local officials should be coming to the people’s table asking us what OUR priorities are for OUR children, and how we would like OUR money spent,” read a piece of literature distributed at the rally. “We are done ‘choosing’ items off their menu, instead, we want them to choose items off our own community menu.”

Among those items on the people’s menu were funding for more teachers and smaller class sizes; support for housing, jobs, and healthcare; and stronger communities. These stood in stark contrast to the anti-worker and corporate profit-centered austerity agenda pushed by the business community and Stand for Children that includes “Right to Work” legislation and a for-profit education system that treats students as future cogs in a corporate machine rather than thinking and creative citizens of a democratic society.

Evan Selby, a Government and Economics teacher at Reynolds High School, emceed the rally. He recalled the strike he and his fellow teachers called to call attention to the “corporate deform movement trying to sabotage our schools, that turns students into automatons.” Selby teaches four classes of 36, 38, 38, and 36 students, as well as 14 students in an English as a Second Language class. The first four are huge numbers, making it difficult for a single teacher to provide the instruction students need to excel.

“All of us have a vested interest in a strong public schools system,” said Selby. “Corporatization of schools doesn’t let teachers give students what they need.”

The solution for those who wish to privatize schools is not providing more teachers and smaller class sizes, but standardized testing of students. These tests are largely based on the erroneous assumption that all people learn and express their knowledge the same way, and groups like Stand for Children want those tests to be used in rating teachers as well as evaluating schools. These tests don’t take into account how students learn, much less their diverse backgrounds. It’s a poor way to encourage students to be fully formed human beings, but great if you value a society where those not among the elite class just sit down, shut up, and do as they are told.

“The OBA and Stand for Children have been pushing a lock-step corporate education reform model that values high stakes testing, charter schools, weakening of teacher unions and public pensions,” said Student Organizer Alexia Garcia, “while at the same time ignoring the effects of poverty on our children and families. Levin and the OBA are pushing education ‘reforms’ in line with corporate interests at the expense of our communities’ health.” 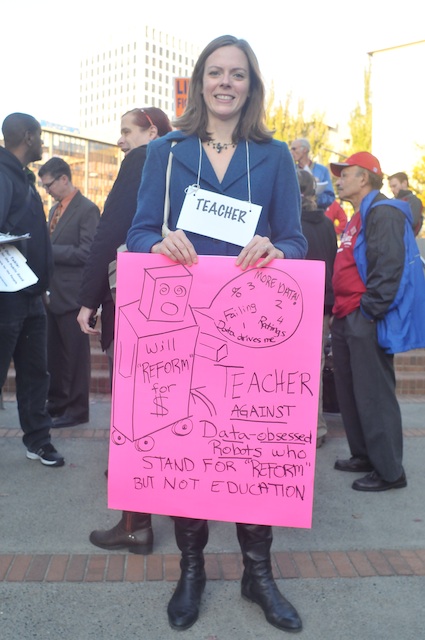 Parent Susan Barrett, who once was part of Stand for Children, stated that she felt the organization really did not want to improve education. She said Levin received her OBA award as a reward for pushing forward their agenda of redesigning the public education system in Oregon, as well as cutting the Public Employees Retirement System (PERS).

Barrett also wondered why, if Governor Kitzhaber and the Oregon legislature were really serious about improving public education, they approved a 30-year tax break to Nike (where for five years Levin was employed). Nike, which made over $25 billion dollars during fiscal year 2013, had threatened to leave Oregon if it did not receive tax breaks. “We need to get Nike and all these other corporations to pay their fair share of taxes,” said Barrett. According to Good Jobs First, those tax breaks will total $2 billion as long as Nike produces 500 jobs. Those jobs are planned to come about from a project in which Nike will invest $150 million, meaning Nike will get $4 million dollars in tax breaks per job.

Greg Burroughs of the Portland Association of Teachers told the crowd that the OBA was “honoring Sue Levin for her efforts to balance the budget on the backs of state retirees.” He then urged the crowd to take steps to help pass an amendment to the US Constitution that would overturn the Supreme Court’s Citizens United v. Federal Election Commission decision that eliminated most laws surrounding political campaign contribution limits. “Corporations are not people,” he said, “and money is not speech.”

Ahjamu Umi of the Service Employees International Union and Housing Is For Everyone (HIFE) related his experience during the recent Oregon University System (OUS) workers contract struggle. Umi noted the OUS workers won a very good contract because they had solidarity with the students, and both they and students were willing to go out on strike. This was, he said, an example of applying the Frederick Douglass dictum that power concedes nothing without a demand. While the OUS workers did have rallies, they also made very clear that they were willing to “take action to make change.” Likewise, Umi said those fighting against privatization of schools, as well as other privatization plans of the OBA and similar business groups, needed to “come together around a plan to bring these people to their knees.”

Board of Education member Steve Buel said that while the so-called education reformers in groups like OBA and Stand for Children call education the civil rights movement of our time, their response “is closer to the Citizens Councils,” referring to the white supremacist organization that opposed racial integration in the US.

Buel also cited the Vietnam War as a proper analogy. That was, he said, was based on lies and made money for war profiteers, much as the “reformers” inside the convention center were peddling lies in order to make profit.

Following the rally, protesters walked down the convention center’s promenade to the doors where OBA dinner attendees were entering. As the group approached each set of doors, they were locked by security, a fitting metaphor for what was being protested.

At issue is the type of society in which people want to live. The People’s Table and those sitting at it represent a belief that government is a tool of, by, and for the people, and its decisions should reflect the will of the people. The results of those decisions should benefit the society as a whole, such as public schools that provide equal educational opportunity for everyone and encourage teachers to craft curriculum that takes into account the individual strengths and talents of students.

Inside the convention center, the OBA, along with politicians including some highly regarded members of the Democratic Party, celebrated an agenda centered around the privatization of public services in pursuit of profit.

“The Governor’s education plan was modeled on the Oregon Business Plan,” said Buel, “which didn’t include meaningful input from Oregon’s educators or parents. It doesn’t address what Oregon’s children need, but what national corporations think they need.”