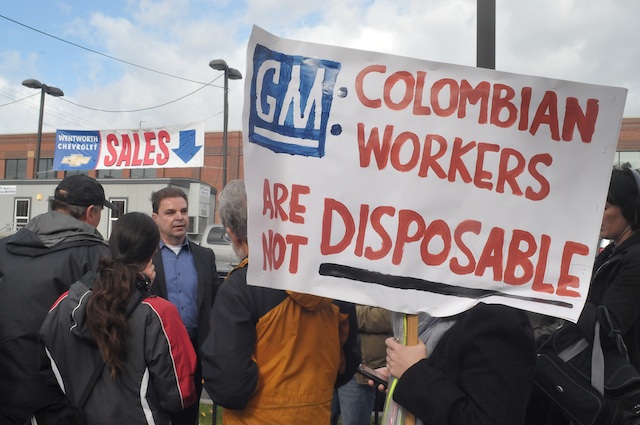 After two years of attempts to receive compensation for injured General Motors workers, protesters are bringing the fight to GM dealerships, the real points of profit for GM. On Saturday November 2, a group of 15 activists gathered at Wentworth Chevrolet on SE Grand Avenue as part of the final push for achieving justice for the Association of Injured Workers of General Motors-Columbia (ASOTRECOL).

The workers of ASOTRECOL were fired from the GM plant in Colombia after suffering injuries–many permanent–and illness on the job. Their firings left them without severance pay and worker’s compensation insurance, clear violations of Colombian law. On August 2, 2011, some of the injured workers began camping out in front of the United States Embassy in Bogota to call attention to this injustice. As well, there have been three hunger strikes that have included the extreme measure of workers sewing their mouths shut.

“The solidarity work with ASOTRECOL has tried multiple tactics to encourage General Motors to negotiate a just compensation for the injured Colombian autoworkers,” said Dustin Hawks, who attended the rally outside the dealership. “And for two years, the pleas of the injured autoworkers have falling on the deaf ears of GM’s executives. We realize now that the only way the injured workers will be heard and compensated is for supporters to assert economic pressure on GM dealerships.”

As a result of ASOTRECOL’s struggle, GM has changed conditions within the plant, a move that according to ASOTRECOL will “prevent thousands of current and future employees from developing the permanent disabilities” that have plagued the workers of ASOTRECOL. Perhaps more importantly, this struggle has built an international movement standing in solidarity with ASOTRECOL and bringing pressure upon GM that has wrought the changes in the Colombia plant.

But there is one step left. GM has yet to provide the injured workers with the compensation they need to get on with their lives. Those injuries have included herniated disks, tendonitis, and carpal tunnel syndrome, and have resulted in some people in their 20s and 30s requiring back surgeries and canes for walking.

“GM has already sat down to negotiate with these workers and has acknowledged the legitimacy of their grievances,” said Paige Shell-Spurling of the Portland Central America Solidarity Committee, which has helped lead the struggle here in Portland. “But the company’s offers were a joke, not even enough to cover the surgeries and ongoing care the injured workers need as a result of their employment. This is the hardest win, because by settling with these workers, GM will establish a precedent that threatens to open the door for other workers injured at their plants around the world.”

“When a company is behaving immorally, the only leverage we have is to stop customers from doing business with the company. We will educate people and give them the information they need to make a decision,” said Jack Herbert.

After bringing their demands to General Sales Manager Chris Borquist, the protesters were asked to leave the property. They then began marching with signs on the adjoining sidewalk, handing out information to passersby. Borquist called police on the activists, and soon three Portland Police officers arrived, reminding the protesters to stay off the property.

Borquist then came out to speak to the protesters and agreed to forward a letter demanding GM compensate the injured workers. Borquist told the protesters their actions did not seem “very professional” and “could be costing hundreds of employees their jobs and income.”

What Borquist and the executives at General Motors either forget or willingly ignore is that they have jobs only because nearly $50 billion in taxpayer money bailed them out. And despite making a combined profit of over $13 billion in 2011 and 2012, GM has not come close to paying back that money. GM is, in fact, still partially owned by the citizens of the United States, and US citizens have a right to demand that their money not be used to exploit workers and throw their broken bodies on a trash heap.

“It should not be forgotten that GM was on the verge of bankruptcy when it received billions of taxpayer dollars in exchange for part ownership in the company as collateral for this loan,” said Greg Margolis of Jobs with Justice. “How GM does business reflects on all of us, and the company has a fiduciary responsibility to provide their workers with safe conditions and family wages and benefits. This responsibility extends to their international operations where an example of fairness at the workplace is especially important to our global image. That image is being tarnished by GM’s failure to resolve the issues with the injured workers of ASOTRECOL.”

It is important that the struggle of the GM Colombia workers be seen as one of many for workplace justice. So-called free trade agreements like the recent Colombia Free Trade Agreement and the looming Trans Pacific Partnership exist primarily for investors to reap greater profits through cheaper labor costs, and even when the FTAs contain language regarding workers’ rights, corporations as large as General Motors are rarely held to them. Workers are simply components of the profit machine, and they are parts that can easily be replaced. With each FTA, that reality hits more and more US workers, and it is in their own interest to stand in solidarity with oppressed workers across the globe.

“The workers of ASOTRECOL are taking on a powerful corporation that is in open violation of the law that treated them as inputs to be used up in an equation meant only to boost profits for those on the very top,” said Shell-Spurling. “Their struggle is our struggle. In the end it will be the strength of our solidarity that will win this struggle, that will get GM to do the final piece that it’s ego doesn’t want: to settle with a bunch of South American workers. And it is the strength of our solidarity in standing together that will determine what the future looks like.”