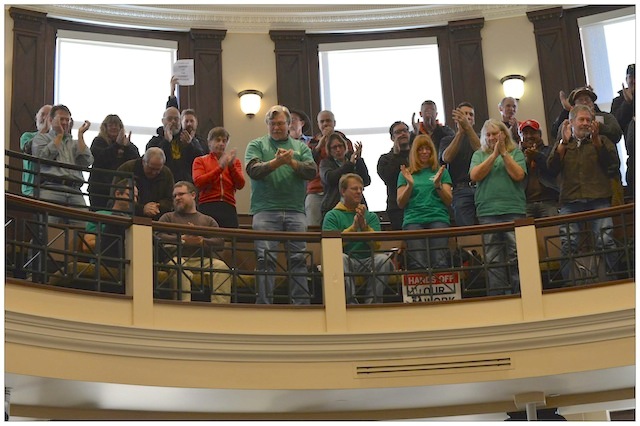 The first item on the agenda as City Council went into session on Wednesday October 30th was a remembrance of Nohad Toulan, the founder of Portland State University’s School of Urban Studies and Planning, and his wife, who died on Monday. During the memorial, Councilman Nick Fish wondered, “How do we honor a couple that for 40 years gave so much to our community?”

Interesting he should ask because the next three people to speak before the council were city workers who are part of the District Council of Trade Unions (DCTU) as well as the Portland Park Rangers who have chosen to be part of the DCTU, but have yet to have their decision acknowledged by the City.   An affiliation of seven unions–AFSCME Local 189, Laborers Local 483, IBEW Local 48, Machinists Lodge 24, Operating Engineers 701, Plumbers and Pipefitters 290, and Painters and Allied Trade Council 5 — the DCTU represents over 1,600 employees whose day to day work makes Portland a better place. These people maintain the streets, clean the parks, upkeep the sewage and water pipes, and do much of the work that makes Portland so livable and usually goes unnoticed, at least until a water main bursts or some other accident occurs. And then the DCTU workers are there to clean up, quickly and efficiently. Apparently, the way the City of Portland wishes to honor these people who give so much to our community is to offer them a contract that emphasizes their expendability.

“The City of Portland is a good employer,” said Mary Prottsman, a non-sworn member of the Police Bureau and a steward and trustee of AFSCME Local 189, “but it has proven throughout the DCTU contract negotiations to be a lousy partner. As a frontline unionized worker, I’m part of a massive effort to provide the services that make this place livable. Asking frontline workers to sacrifice time and time again, doing more with less and less is compromising the investment in Portland’s future.”

Since 2008, annual budget cuts have led to the elimination of nearly 500 jobs. “We lost four coworkers from my group in street cleaning last year alone,” said Farrell Richartz. “We have fewer hands to do the same amount of work. In some bureaus staffing levels are so lean that employees are forced to work overtime on a regular basis. It’s like every day is an emergency.”

DCTU affiliated employees have been working without a contract since July 1st. The primary sticking point in the contract bargaining is the City’s demand to be able to contract out work. The current contract only allows for outside contracting if it can be shown to reduce costs, but in making that calculation, compensation for the subcontracted workers must be comparable with that received by city workers. That stipulation regarding compensation prevents the city from contracting out work to companies using low wage, non-union workers. Such contracting out of work shifts the emphasis of the work from providing taxpayers with vital services to creating profits for the company doing the work. 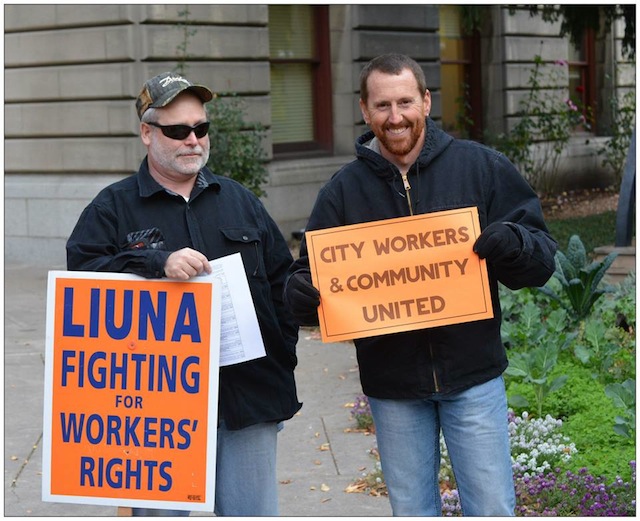 POGO’s study was for the federal government, but a search of newspapers from around the country yields numerous articles about privatized city services, supposedly a panacea for budget deficits, ending up costing more than if city employees did the work. Aside from private companies demanding a profit that does not enter into the public sector equation, cities still must employ people who will oversee the contracts, make sure the work is being done, and deal with concerns and complaints from city residents. And in their drive for maximum profit, private contractors have often failed to provide promised services and billed governments for more than their original estimates. According to Dr. Mildred Warner, Cornell University Professor in City and Regional Planning, “Many municipalities who have privatized services often reverse course. These reversals are primarily due to problems with service quality and lack of cost savings.”

And without any check on this power of City managers to contract out work, the system becomes ripe for corruption, as exemplified by the parking meter scandal which saw Portland parking manager Ellis McCoy accepting bribes from companies doing business with the City.

The upshot? Citizens often find themselves on the hook for higher costs than had the work been left to government workers. Call it taxpayers’ remorse.

Another hit to taxpayers is the cost of maintaining a workforce composed of a substantial number of temporary workers. Vicente Harrison, a Portland Park Ranger, also spoke before City Council. A husband and a father of two, Harrison talked about the problems faced by seasonal workers who are not unionized and thus lack the protection–of wages, benefits, and dignity–of the DCTU members. On the job, Harrison said, “aside from the cost of constant retraining, high turnover lowers morale in our workgroup as we watch our partners run out of hours.” He noted how since March, when the Park Rangers “united to sign cards choosing to be represented by (Laborers) Local 483 and part of the DCTU contract,”–which the City refused to acknowledge–there has been “close to 100% turnover in staffing among the seasonal Rangers”, resulting in the training and outfitting of about 12 new Rangers.

Harrison–now a full-time Ranger–also talked about “the personal toll on the seasonal rangers who are living on the edge,” such as figuring out how to pay bills and set aside enough money to get through the off-season. “Imagine coming into work one day and finding out it’s your last day. As a seasonal worker, I had to deal with the same stressful uncertainty, trying to pay a mortgage and raise two children.”

As with similar battles throughout the country–perhaps most famously in Wisconsin–this is a battle between job creation and austerity. In demanding contract language that allows it to subcontract work with no regard to wages and benefits–much less diminishing public oversight–as well as in not recognizing the park rangers choice to be represented by Laborers Local 483, the City Council has taken a path toward what Governor Scott Walker has achieved in Wisconsin. It is a path that values profits over people.

The work done by the members of the DCTU and the Park Rangers does not create wealth for private interests. It produces wealth for the city and its citizens. As well, unionized workers not only tend to have higher wages and better benefits than non-union employees, but union wages and benefits result in higher wages and benefits for those non-union workers. As Prottsman had it, “This is about the rights of middle class workers to bargain collectively and progressively to make our entire community stronger. As elected officials you have the power to stop management’s dawdling at the table, stop trying to bust city unions, and stop trying to balance our financial shortfalls on the backs of labor trying to keep this city clean, safe, prosperous, and awesome. If the council is concerned about the bottom line of the city, then the council should be concerned about the bottom line of the people.”

Want to get involved? City Hall needs to hear from Portland residents who support city workers.

Call Mayor Charlie Hales at (503) 823-4120 and let him know that you want to keep public services public and that you support strong protections from wasteful outsourcing and crony contracts.

Call Commissioner Fritz, who overseas Parks and Recreation, at (503) 823-3589 and tell her you support union recognition for the Portland Park Rangers and a fair contract for community center staff.