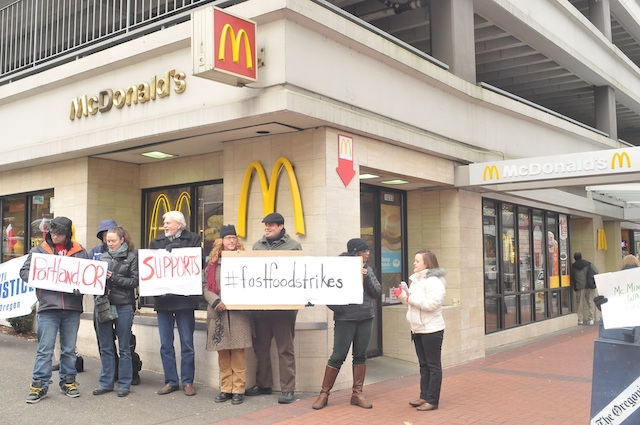 Demanding a pay hike for fast-food workers to $15 an hour, Portland activists rallied outside the McDonald’s on SW 6th and Main on December 5 as part of a national day of action. Portland was one of a hundred cities in the country that saw people demanding an increased wage for workers in fast-food restaurants, including some strikes. Local rallies also took place in Gresham and Vancouver, Washington.

“We’re asking McDonald’s to be fair and share the billions they make in profits with the workers,” said Marco Mejia of Jobs with Justice. “They are paying minimum wages, and people are going hungry with those wages.”

The rallies and strikes came just days after the Institute for Policy Studies (IPS) released a report showing that fast-food company CEOs have used taxpayer dollars to fund their own salaries while at the same time reducing taxes owed by their companies. According to the IPS “these CEO pay subsidies are the result of a loophole that allows firms to deduct unlimited amounts from their income taxes for the cost of stock options, certain stock grants, and other forms of so-called ‘performance pay’ for top executives. Put simply: the more corporations pay their CEOs, the less they pay in federal taxes. And ordinary taxpayers wind up footing the bill.”

According to the report, the CEOs of the top six publicly held fast-food companies (McDonald’s; YUM! Brands which includes Taco Bell, KFC, and Pizza Hut; Wendy’s; and Burger King) “pocketed more than $183 million in fully deductible ‘performance pay,’ lowering their companies’ IRS bill by an estimated $64 million.” In the case of YUM! Brands, it’s CEO David Novak received $94 million in fully deductible performance pay over 2011 and 2012, resulting in a $33 million taxpayer subsidy to YUM! Brands. Similarly, the CEOs of McDonald’s–James Skinner and Donald Thompson–received $41 million of performance pay over 2011 and 2012, which ended up costing taxpayers $14 million.

“It would be great for the general public to know what the real cost of their Big Macs and Happy Meals are while CEOs are taking profits in the millions,” said Ravyn Stanfield who attended the downtown rally.

Taxpayers also subsidize the low wages fast-food workers receive. A report issued by the University of California Berkeley’s Center for Labor Research and Education (http://laborcenter.berkeley.edu/publiccosts/fast_food_poverty_wages.pdf) found that between 2007 and 2011, fast-food workers in the US received almost $7 billion in public assistance. Such statistics might cause confusion since the stereotype of fast-food worker is a high school student trying to save some money for college. But according to the UC Berkeley study, 68% of front-line fast-food workers are not enrolled in school and are single or married adults, with or without children. In other words, a large percentage of those who work fast-food jobs are working to put food on the table, keep the apartment heated, and get medicine for their children.

“As taxpayers, we subsidize McDonald’s, Burger King, and Wendy’s,” said Chris Ferlazzo of Jobs with Justice. “Many of these workers have to get support from the state, which we taxpayers pay for.”

While the federal minimum wage has been stuck at $7.25 an hour since 2009, the fight for an increased minimum wage has immense popular support. Gallup consistently finds that over 70% of respondents support raising it to $9 an hour, an idea which President Obama supported in his State of the Union address this year. A poll conducted by the National Employment Law Project Action Fund saw 80% of respondents saying it should be raised to $10.10 an hour.

More importantly, there have been successes. Most prominently, SeaTac residents recently approved raising the minimum wage to $15 an hour for the 6300 hospitality and transportation workers in and around Seattle-Tacoma International Airport. Voters in New Jersey increased the state’s minimum wage by $1 to $8.25 an hour. That same ballot initiative also included an automatic cost of living increase to the minimum wage. Earlier this year, California, Connecticut, and New York also took steps to raise state minimum wages and voters in Idaho, Massachusetts, and South Dakota will see initiatives in 2014.

But for fast-food workers, the time for action is now. Much like the workers at Wal-Mart,  fast-food workers have waged a high profile campaign highlighting the need for a living wage–one that doesn’t depend on government assistance for survival. The fight can be viewed within the context of a larger austerity battle, wherein the corporate class demands more cuts to an already frayed safety net as the answer to the economic crisis, while it continues to manipulate the system in order to rake in unconscionable profits.

“The owners of McDonald’s, the bankers, and the big corporations are getting richer and richer,” said Mejia, “and the workers are getting less and less.”