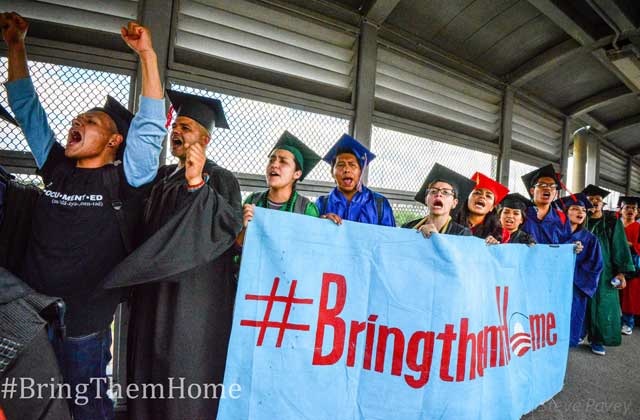 Tired of waiting for the federal government to reform immigration law, a growing group of young people without documentation has decided to take matters into its own hands. Undocumented and Unafraid, they are taking the fight to the heart of the US immigration enforcement, challenging the system head on, and even using US immigration law to subvert the system. Over the past month, members of the National Immigrant Youth Alliance (NIYA) and DreamActivist.org have been engaged in a West Coast speaking tour, talking about how they have used direct action to organize and work for immigrant rights.

On November 16th at Reed College’s Vollum Center two of these activists–Dulce Guerrero and Luis Leon–addressed a crowd of over 50 people. The actions in which they have been involved stand in stark contrast with the lack of legislative progress in Washington, DC.  Both bills that have come out of the House of Representatives and the Senate are focused more on punishing immigrants and expanding barriers to entry and border patrols.  Currently it is impossible to imagine the possibility of successfully passing any legislation that includes a path to citizenship,much less something that takes into account the forces–such as so-called trade agreements–that push people to migrate to the US.

Guerrero, who was born in Mexico and came to the US with her family when she was two, talked about growing up in Georgia always aware that she and her parents were without documentation. While they had come here in search of a better life, Guerrero remembered too many instances of her parents’ fear and stress. On some occasions when driving, her father would suddenly start looking for a gas station, and her mom would start crying. A police officer was behind them, and her father did not have a driver’s license, a violation that could get him deported.

Her parents’ fears became hers, and Guerrero found she was starting to act like her parents, fearing the police and avoiding conversations about immigration. It was a lesson in staying in the shadows: “keep your head down, stay away from trouble, and stay away from law enforcement.”

In January, 2011 Guerrero’s mother, who also lacked a driver’s license, was pulled over for a traffic violation. She called home, but in the middle of talking, the call dropped, and Dulce’s return calls to her went unanswered. Many hours later Dulce’s mother called from the county jail, where she spent two days as the family wrestled with posting her bond. To pay or not to pay? Either one, depending on which family member or friend was asked, could result in deportation.

It was then Guerrero took a formative step. She went to her computer, got on the internet, and typed “undocumented illegal immigration.” She had never typed those words before out of fear that someone somewhere would notice. Her search led to NIYA’s website and DreamActivist.org, and like so many people who step out of self-imposed isolation, Guerrero found she was not alone. She read story after story of people dealing with similar experiences and felt a strong connection with them.

The family ended up posting bond, Guerrero’s mother was released, and the threat of deportation was, for the moment, extinguished. But those two days without her mother left their mark on Guerrero and proved to be her wake up call, telling her “this deportation is real, it’s in my face, and it’s coming after my mother.”

Three months later, Dulce attended a NIYA meeting in Atlanta and began taking an active role in pushing for immigrant justice. She is currently an Undocumented youth organizer as well as a Secure Your Own Community trainer for NIYA. One of the most important tactics of these young immigrant rights activists is keeping immigration cases in the public eye. 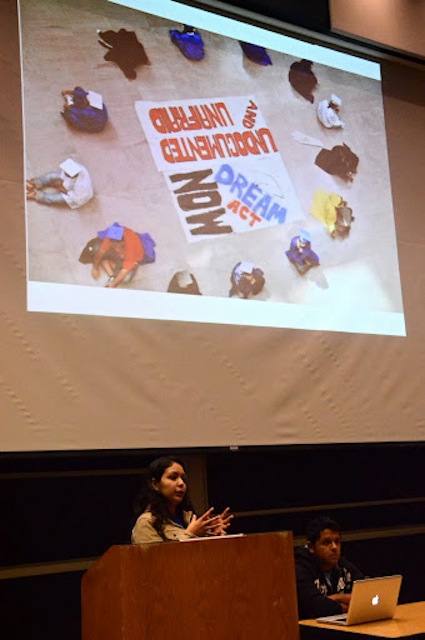 Immigrations and Customs Enforcement (ICE), said Guerrero, likes to present itself as an institution that keeps people safe. Indeed, the propaganda behind the Safe Communities Program centers around vilifying all immigrants without documentation as violent criminals, which was understood to mean non-white immigrants. In reality, it makes more insecure communities, since people without documentation are less likely to report crime out of fear of being detained and deported. Furthermore, over 80% of those detained are taken in for infractions on the level of traffic violations–hardly the stuff of criminal violence.

NIYA decided that one way to highlight the injustice of current immigration law was by exposing the lie at the base of ICE’s mission. “We want the entire world to know when they are taking a mother from a child,” said Guerrero, and, perhaps unsurprisingly, ICE officials would rather not deal with the publicity that comes with this and similar cases that tear families apart. “When it knows the media is on the case and the community is watching,” said Guerrero, “ICE doesn’t want to get involved.”

But what if ICE is forced to get involved?

It seems fair to say that when hearing such a question, most people would question the wisdom and morality of forcing ICE’s hand. If, according to its claims, ICE is in the business of deporting felons without documentation, then committing a felony is the only sure way to set ICE into action. There is, however, another way: make ICE enforce its own rules, and then use those rules to beat it. And it is this conditional that NIYA and DreamActivist.org sought  to crack.

Luis Leon is from North Carolina, but was born in Veracruz, Mexico. His family came to the US without documentation when he was 3, and Leon lived in North Carolina until he finished high school. Due to his immigration status, he was not eligible for in-state tuition and was thus unable to afford college. Deciding he was “not going to wait for a politician to tell me when I can work and when I can go to college.”

Luis moved back to Mexico in 2011, where going to college proved little easier. First, he had to present proof that he had received a “valid education.” After a spell, he finally got his records, but once enrolled he came up against the hard reality that he did not know how to read and write Spanish beyond a rudimentary level. When Leon approached one of his professors to explain this problem, he was told that growing up in the US was his problem, not the professor’s. That same instructor later asked him to read an article in class which resulted in students laughing at Leon.

Cruel, no doubt, but also not unique. Like many people Leon knew who grew up in the US and then returned to Mexico, he found himself shunned. Then he heard about the Deferred Action for Childhood Arrivals (DACA) put forth by President Obama in June, 2012. Because he had moved back to Mexico, Leon could not take advantage of it. Desperate because he was not fitting in, and figuring he had little to lose, Leon decided to cross the border on his own.

He was caught repeatedly. On the fourth attempt he found himself banned from entering the US for 20 years under any circumstances. Leon moved to Cancun where he could use his English in hotels. Cancun wasn’t terrible but he missed his family, so when an acquaintance contacted him and suggested he check out a new program called Bring Them Home, Leon immediately said yes.

Bring Them Home came about when NIYA and DreamActivist.org decided that they also needed to help people who had left the US to pursue higher education, but found themselves in predicaments markedly similar to Leon’s. Bring Them Home’s chosen tactic may at first seems counter-intuitive, but it works.

“If we know how to get them out of detention centers,” said Guerrero, “we need to get them in.” Thus Leon, along with 8 others, prepared to cross the border into the US on July 22nd. It was only then, with reporters descending upon them before they crossed, that Leon realized how big the action was.

They crossed the border into the US at the Nogales, Arizona port of entry, dressed in graduation gowns and bringing with them paperwork for humanitarian parole and asylum (It is not uncommon for people in Leon’s position to be kidnapped and held for ransom by drug cartels and other groups who reason that their families in the US can afford to pay up.) Leon said the border patrol officer seemed scared by all the chanting and banging on walls by supporters of the Dream 9.

“What do you need,” the officer asked Leon.

The Dream 9 were then taken to Eloy Detention Center, a private–and infamous–prison run by Corrections Corporation of America. The plan was that NIYA would bring outside pressure, just as it had in other cases, that would result in the Dream 9’s release. Leon thought they would be in Eloy for at least six months, but after 15 days that included the women in the group holding a hunger strike, all nine were released. After all the pressure brought by supporters–almost 30,000 letters and phone calls–Leon said, “ICE just wanted to get rid of us.”

They were then taken to the Greyhound Station in Tucson where Leon met some NIYA activists. “It was so good to hug the folks who helped me and not have a border between us,” Leon said.

A few days later he was home, surprising his mother by arriving a few hours earlier than expected. Sneaking through the back window, he walked in as the family was sitting down to eat, saying, “Hi everyone. I’m hungry.” Just another day.

The action was repeated in September with 34 people from a wider geographic range. While the results were not as perfect–five of the 30 have been deported and one remains in custody–it was still a success, and activists are now planning a third action.

NIYA and DreamActivist.org’s direct action has consistently pushed the envelope, and they are not without their critics, many of whom believe they are deflecting attention from immigration legislation reform–an unfair charge given Speaker of the House John Boehner’s recent negative comments about sweeping reforms.

While Congress dithers, fearful of payback at the polls or just full of unfettered racist hatred like Representative Steve King of Iowa, these young folks are on the front lines fighting for justice, pushing the boundaries of what is possible when people decide they have had enough. That’s what makes NIYA and DreamActivist.org’s work so powerful. They refuse to live in fear, and they are willing to take risks in order to let the public know what their struggle–and the struggle of all people without documentation–looks like.

For more information about the National Immigrant Youth Alliance, see their Facebook page at https://www.facebook.com/NationalImmigrantYouthAlliance.

For more information on the Dream Activists, go to http://www.dreamactivist.org.

Want to get involved with the immigrant rights movement in Portland?  Check out the Portland Central America Solidarity Committee’s web page at http://www.pcasc.net.