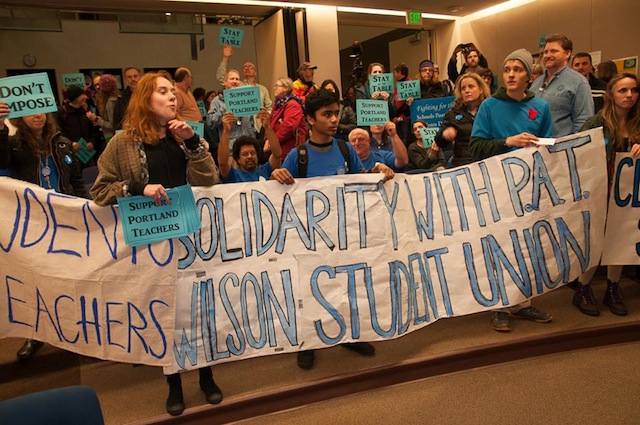 The Portland Public Schools Board of Education received a lesson from the students it is supposed to serve on Monday night: we are people, not commodities, and we demand that our education serve us. It was a lesson for which most of the Board did not care.

The students were part of a contingent of over 500 people that came out in support of the Portland teachers who have been in contract negotiations with PPS since April. While the PPS Board declared an impasse in negotiations in November, bargaining has continued through a mediator, including a session Monday morning. These negotiations have taken place as a wave of austerity measures–including the push to privatize public education–has swept across the country, and Portland’s students and teachers have had enough.

In addition to the usual disputes surrounding wages and benefits, teachers have also been fighting the board’s desire to micromanage the classroom. The PPS Board wants to eliminate the language in the current contract limiting class sizes and is committed to evaluating students’ progress through the use of standardized testing. The Board also is not keen on the teachers pushing for increased access to art, music, and physical education classes.

The students of Portland’s schools have been at the forefront of fighting for their teachers. Marley Schlichting, a Cleveland High School member of the Portland Student Union (PSU), spoke at a rally prior to the board meeting. “I am appalled at the lack of respect the school board has shown our teachers,” Schlichting said. “I want to see teachers and students taken seriously. The school board should be doing what is best for students. There should be no compromise when our education is at stake.”

Following the rally, the crowd entered the Blanchard Education Service Center, its numbers so big that at one point security refused to admit any more people. Cleveland High School student Jesse Rapoport conducted a mic check, calling for an end to the “war on schools” and presenting the Portland Student Union’s “The Schools Portland Students Demand”, a ten point list that includes class sizes of less than 20 students, proper funding for the arts, and student-teacher collaboration in building curriculum.  At its heart, the demands are a push for greater local control, reasoning that the people who spend their days in schools know best what is needed.

After about 30 seconds, Rapoport was told to be silent. That demand to sit down and shut up encapsulated the problem students, teachers, and parents have with most of the board and faux-education reforms such as President Obama’s Race to the Top which rewards students, teachers, and schools for scoring well on standardized tests. Those tests have nothing to do with using knowledge in creative ways to solve problems. They measure a capacity for spitting back information, instead of using it, and teachers often find themselves–because their job evaluation is tied to student performance on these exams–teaching to the test.

However, Rapoport refused to be quiet and continued for another 90 seconds. Other students joined in, and they let the Board know that if the teachers did not get a fair contract, they would go on strike in solidarity with their teachers. The Board members appeared caught off guard, unready for this act that not only questioned their authority, but successfully challenged it. The meeting was ended, and outside of Board member Steve Buel who stayed until the crowd dispersed, the remaining members–along with Superintendent Carole Smith–left the room.

That was not the end of the meeting. In another reminder that Portland’s schools do not belong to the Board, but to the students, teachers, and the communities they serve, students continued addressing the crowd reminding them that what really was at stake was the future.

“Carole (Smith) and the School Board cannot make decisions for my education,” Sekai Edwards, a student at Jefferson High School, told the crowd who remained in the hall after most of the board had fled. “They are not in the schools every day. They do not have my experience, and they do not know what I need. If you do not want to educate, then don’t have schools and deal with the consequences.” 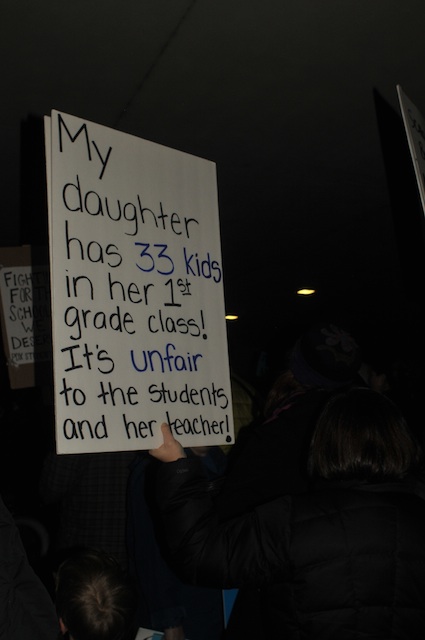 The Portland Student Union has been impressive on many fronts during the teachers’ contract struggle, but most profound has been its understanding of solidarity. These students have consistently, and in increasing numbers, chosen disobedience over subservience in their fight for their teachers and their education. Portland students have been focused on creating better schools, and thereby, better communities.

According to the students, that solidarity will not end with a contract being signed. Judging by their list of demands, they envision that all school community members must remain engaged going forward.

“It’s clear that the we must continue to fight for education after the contract and the only way that fight will be won, is if students, teachers and parents stand in solidarity with one another,” Jackson said.

“We are facing a corporate attack on public education, which will only be stopped by us as the stakeholders. Monday was a clear example of us laying the groundwork for this movement.  We’re all ready for a movement to save public education.”