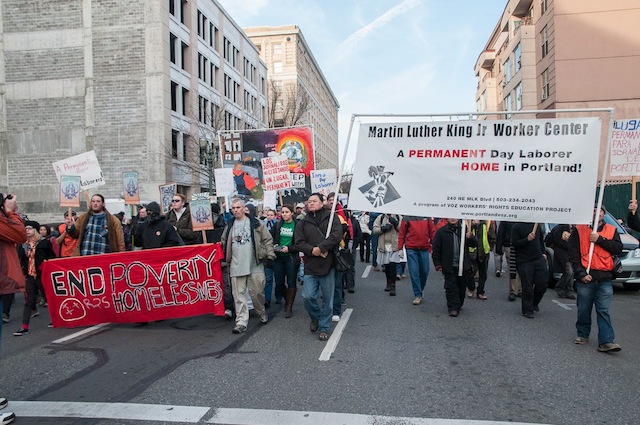 Today, politicians of all stripes will step into celebration of the life and vision of Martin Luther King, Jr. The rhetoric of justice will be heavy, and praise for King’s dream will abound. Most pronouncements will overlook King’s latter years when he fought for the abolition of poverty and the redistribution of wealth and power through “radical changes in the structure of our society.” Come Tuesday morning, many of these politicians, through with their annual bromides, will get back to their regular practice of social and economic injustice that serves to defile King’s legacy.

On Friday January 17th, over 150 supporters of people without housing and day laborers marched to Portland City Hall to demand the City Council live up to King’s vision of a truly compassionate society, one that does not require some people to live in impoverished conditions, while others reap the rewards of avarice. The boisterous crowd called on City leadership to start acting on behalf of all people in the city, not just the business interests.

Day laborers and people without housing have been under attack by the City. The Martin Luther King, Jr. Day Laborer Center, which serves as a safe place off the street where employers and workers can contract for daily work, and also provides classes to help people improve their work and language skills finds itself on unstable ground. Operated by the VOZ Workers’ Rights Education Project, the five year lease with the City expired in June 2013, and since then the site has been operating on a month-to-month contract with the City. That contract allows the center to be closed at any time with 6 months notice.

The Day Laborer Center has been an unmitigated success. Since opening in 2008, it has generated over 21,000 jobs for day laborers, setting a minimum wage for its workers at $12 an hour. It has also recovered over $300,000 in stolen wages. Additionally, the center has mollified the public safety concerns of area residents and businesses who were not pleased with the many people gathered on street corners looking for work. VOZ now feels it is time for the City to cede ownership of the land and make the center permanent.

Romeo Sosa, Executive Director of VOZ said day laborers are like any other person wanting “a good job, good wages, and a good future.” He then called on Mayor Charlie Hales and the Portland Development Commission (PDC) to “honor Martin Luther King’s day and honor his dream” by putting the land in the Day Laborer Center’s name.

The Day Laborer Center has served an important role over the past few years for Latinos–who have been among the hardest hit during the recent economic depression. Alice Perry, Administrative Director of the Latino Network, said the Day Laborer Center provides a “safe, stable, and structured vehicle” for helping people find work, as well as provide relief by helping people gain new skills and deal with wage theft. Perry told the crowd how the Day Labor Center “offered a concrete and proven way to carry out” King’s mandate that “the dignity of the individual will flourish when the decisions concerning his life are in his own hands, when he has the assurance that his income is stable and certain, and when he knows that he has the means to seek self-improvement.”

Reminding people that Latinos are “oppressed by the system, but the system can’t live without them,” Rachel Gilmer of the Portland African American Leadership Forum connected King’s fight with the fight of the day laborers and Portland’s African American community. The PDC, she noted, had recently given away $2.4 million to out of state developers to build a Trader Joe’s on NE MLK Jr Blvd–in the heart of Portland’s African American community where the sting of gentrification is still fresh–but it has yet to find the $300K it would cost the city to turn over to VOZ the land upon which the Day Laborer Center stands.

Kayse Jama, of the Center for Intercultural Organizing, urged people not just to fight for the center, but for the day laborers to become “leaders and visionaries of our community.”

Former Mayor Tom Potter, who helped establish the Day Laborer Center, spoke eloquently of the connection between King and the Day Laborers Center. He said the center was important because it made clear–and was working to change–the unfairness that “not everybody gets to share in the wealth of our country”.

After marching over the Burnside Bridge, the day laborers and their supporters converged upon Right 2 Dream Too (R2DToo) to meet up with people without housing and their advocates. Houseless people are finding the difficulties of getting by each day exacerbated by police sweeps of their encampments, some under bridges. These sweeps result in peoples’ possessions such as blankets and clothing being confiscated. On winter nights–even ones not as cold as the mid-December cold snap that hit Portland–those blankets and clothing, as well as even the small protection offered by the underside of a bridge, are often necessary for survival. Taking them away can effectively be an execution.

R2DToo also continues its struggle with the City to find a permanent location. Back in September, it appeared R2DToo–with the help of Commissioner Amanda Fritz–had reached an agreement with the City to secure a site under a ramp to the Broadway Bridge. But the business community, headed by developers Homer Williams and Dike Dame, convinced Mayor Hales to put its interests ahead of the Dreamers. Since then, Williams, Dame, and Hales have tried every which way to pretend they are negotiating in good faith with R2DToo and searching for a permanent solution.

That is a nice bit of propaganda, but it has little to do with reality. R2DToo has not been part of the negotiations. Instead, Williams, Dame, and Hales have hatched ideas and held press conferences where they pretend they are not trying to shove a business solution to a human problem down the throat of R2DToo.

Paige Shell-Spurling, who has been active in fighting for workers injured at a General Motors plant in Colombia, connected the insecurity of the day laborers with that of Portland’s houseless people. Responding to Hales’ putting the financial interests of a few Portland developers over the lives of people without housing, Shell-Spurling said, “Mr. Mayor, if you keep us from dreaming, we will keep you from sleeping.”

Ibrahim Mubarak, who helped found R2DToo urged the City to end the sweeps and stop treating people without housing as less than human. “We’re not trying to be separate,” he said, “but equal. We are somebody.”

The march proceeded to City Hall where Jose Serrica told the crowd that the increase in houselessness and poverty are is not natural, but rather a matter of political choices. “Some of the people responsible for that work in that building right there,” he said, pointing to City Hall.

Serrica’s words echoed not just Martin Luther King’s, but those of every person fighting for justice against entrenched power: current systems are not permanent forces of nature. They are made by people, and can be dismantled by people and replaced with systems that value people over profit.

All it takes, said Ahjamu Umi, is for people to realize that they have that power and then set about working with other people to use it. “There ain’t no power in that building,” Umi said. “The power is here with you all. Martin Luther King understood that.”

When the crowd attempted to enter City Hall to air their grievances, they were prevented from entering by security.

Outside of City Hall Dana Haynes, Hales’ Director of Communications was peppered with questions about the mayor’s seeming indifference to the plight of the day laborers and people without housing. It was a competent performance, with Haynes answering questions that allowed him to provide some cover for Hales, while otherwise claiming he was “here to listen” and not give answers.

Haynes was adamant that those without housing in the city number between 1600 and 1700, despite the fact that those who actually interact with houseless people believe the number to be much higher. When asked if the City had a plan for dealing with houselessness, Haynes said there was one, but it hadn’t yet worked, but when asked why then the sweeps continue despite this lack of solution, he had no answer. He was also silent when Mubarak noted that R2DToo works. 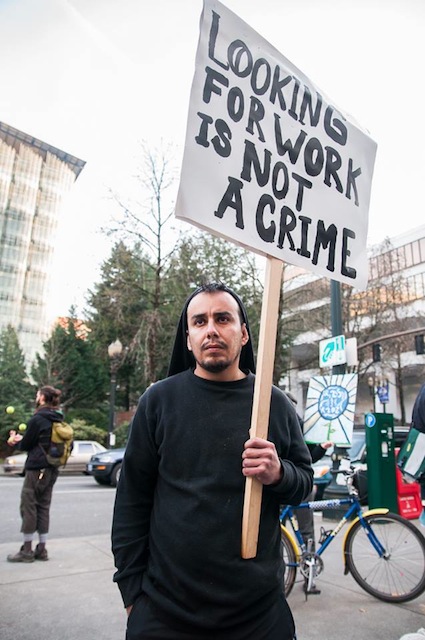 Martin Luther King was complex, but there was one constant in his life, as Umi said, which “was about standing up against injustice”. The King we are told to honor stood up against the denial of civil rights to Black people. While that King is certainly worthy of honor, his evolution led him to examine the injustice and violence inherent to capitalism. This evolution led the Washington Post to declare that he had “diminished his usefulness to his cause, his country, and his people.”

As politicians pay their respects to King today, they will ignore the King who questioned the economic underpinnings of this country and sought to build an anti-poverty movement from the ground up. It should then come as no surprise that serious solutions to problems facing the most vulnerable are not forthcoming from our politicians.

As Martin Luther King knew, serious solutions are not created by relying on political leaders– they are created when those who suffer from want of solutions work together and force political leaders to bend to their will, rather than to the will of those with power and privilege.