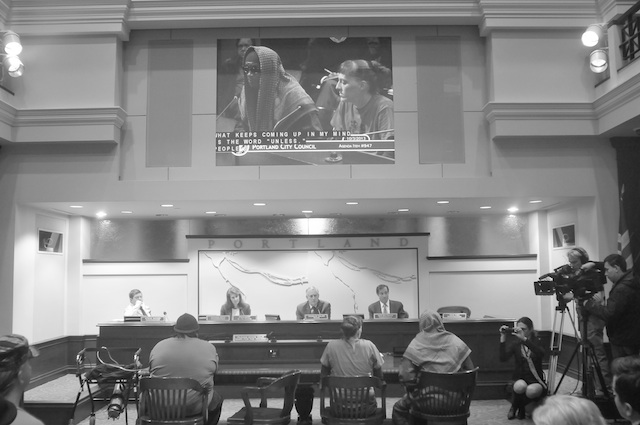 A few steps forward, one back. That was again the story for Right 2 Dream Too (R2DToo), the rest area for people without housing that has been located at the corner of Burnside and NW 4th  for over two years.

At a City Council meeting on February 12, it was expected that the City commissioners would pass an ordinance that would result in R2DToo moving from its current site to somewhere other than the Pearl District. The deal involves some Pearl District developers paying $142,000 for the parking lot under the East side ramp of the Broadway Bridge–a location to which R2DToo had planned to move last autumn, until said Pearl District developers and residents forced Mayor Charlie Hales to reconsider.

Under the terms of the ordinance, the developers will give R2DToo $846,000 to buy or lease a place in the downtown area, presumably not one in the Pearl. What should be noted, however, is that the developers are getting a sweetheart deal for their $1 million, because they had been under contract to buy parking from the PDC for their nearby hotel for $1.5 million for 10 years–unnecessary now that they’ve secured the lot.

The ordinance hit a snag when Commissioner Dan Saltzman, who oversees the Housing Bureau, expressed his doubts and said he needed another week to mull it over. Because the deal was brought up as an emergency ordinance, Saltzman was effectively able to exercise veto power, at least until this Wednesday’s meeting. Saltzman stated he was worried over such a large sum of money being approved without knowing how it would be spent, as well as who–the City or Right 2 Dream Too–would own the the land.

Furthermore, since part of the deal requires the property R2DToo purchases to be within 1.5 miles of the Portland Building–thus insuring its proximity to the resources people in the houseless community need–Saltzman was worried the $846,000 would not purchase much and possibly force the City to give money to R2DToo. “I don’t want to set up a situation where affordable housing money is bleeding over into Right 2 Dream Too,” Saltzman said.

Saltzman’s comment brought boos from the crowd. It was stunningly insensitive, albeit composed of the all too common rhetoric one hears when money might actually be used to help people instead of providing tax breaks or other incentives that benefit the already wealthy. Commissioner Amanda Fritz, who has worked tirelessly with and for R2DToo, rebuked Saltzman, reminding him that according to the deal she, Mayor Hales, and R2DToo would manage the use of the $846,000. Fritz also reminded him to stay focused on the matter at hand.“Right 2 Dream Too would like to have certainty too,” Fritz said, “but this is about this ordinance, not the future.”

Right 2 Dream Too works, but it exists outside the City’s model for housing. Its services are clearly needed. R2DToo, along with more permanent living spaces, must be expanded, particularly in light of the police sweeps of houseless encampments. During these sweeps, police seize property including tents, sleeping bags, and sometimes, medication. In the case of a cold snap or a snowstorm–as was recently the case–taking away a person’s sleeping bag can be a death sentence. In fact, at least five houseless people died during the recent snowstorm.

Mayor Hales could put an end to these sweeps immediately. Instead he does nothing and it appears that the idea remains hands off to the rest of the Council.

The City has failed in its plan to get rid of houselessness. This was entirely predictable because, outside of Commissioner Fritz, it seems none of the commissioners have ever wanted to solve the problem. They utter niceties–or sometimes, as in Saltzman’s case, un-niceties–and then go searching for a solution that will please the business community. If people freeze to death because they have no place to go, or because a mayor endorsed a sweep that takes away their sleeping bags and extra clothing, well, that’s just the cost of doing business.

In closing discussion about the ordinance, Fritz said that leaving people out on the street when the weather is life-threatening “is not the way we are as Portlanders.” It’s certainly not the way of many Portlanders, including Fritz. At present the jury is out on the rest of the City Council and the business interests that Council too often prefers to serve at the cost of human lives.