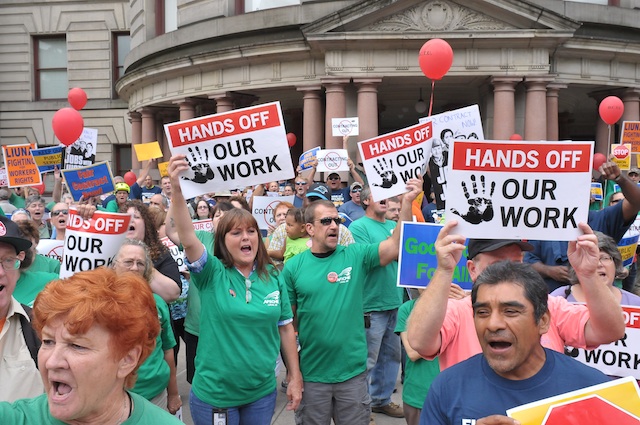 The members of the unions making up Portland’s District Council of Trade Unions (DCTU) have soundly rejected the contract tentatively agreed to between the City of Portland and the DCTU bargaining team. In doing so, they have sent a message to both the City as well as the leaders of their unions who made up the bargaining team: do not try to foist a terrible contract on us.

The DCTU is a trade federation composed of over 1,600 members of AFSCME Local 189, Laborers Local 483 (otherwise known as the Laborers’ International United of North America Local 483, or LiUNA 483), IBEW Local 48, Machinists Lodge 24, Operating Engineers 701, Plumbers and Pipefitters 290, and Painters and Allied Trade Council 5. The vote was tallied on Monday February 10th with 635 members against the proposed contract against 462 supporting it.

The tentative agreement had been reached by the City and the DCTU bargaining committee in January. In a blogpost on the Willamette Week’s website, Aaron Mesh quoted Rob Wheaton, the DCTU’s chief negotiator and council representative for Oregon AFSCME, as saying, “I have not quite wrapped my head around what happened here.” Wheaton’s statement should send a clear message to the DCTU’s membership because what happened seems quite clear: the DCTU’s members could never get their heads wrapped around why such a poor contract was even considered.

When the bargaining team approved the tentative agreement with the City, it tried to tell union members not to trust their eyes, that a terrible contract was in fact a wonderful one. The major sticking point was the language surrounding Article 6, dealing with the contracting out of labor. In prior contracts, with a few exceptions, the City could only contract out work if it could prove it was cheaper to do so.  Public workers, unlike private companies, do not have a profit motive, so it should come as no surprise that it is difficult for private companies to do work cheaper than Portland’s public servants.

The now-defeated contract contained a new Article 6–one that in the tentative contract’s “Summary of Changes in Final Tentative Agreement” was described as “Re-written entirely.” It gave the City much greater leeway to contract out labor over a myriad of circumstances, including cases where it was simply more efficient, a vague contract term if ever there was one. It was a terrible giveaway, not only for the DCTU’s members, but for Portlanders who, as studies have shown with other cities that contract out services usually done by public workers, would end up paying more taxes for lower quality work as private companies seek to maximize their profits.

Other major concessions to the City by the DCTU leadership included tiny cost of living adjustments to wages over the next three years, changes to rules regarding overtime, and giving up protections that protected members from being forced to do job duties outside of their classification.

Where the City will go from here is not known. It could enforce the contract anyway. But regardless, the DCTU has ground to make up. Quickly. A few members have said that they, along with many others, wanted to take the fight to the City right from the beginning of negotiations a year ago, but the bargaining committee said it was too early to do so. Then they were told it was too late. They felt sold down the river.

For the DCTU’s members, a couple of things should be certain. First, their leadership needs to be held accountable. It’s not just that the bargaining committee accepted such a terrible proposal. The response to the proposed contract’s rejection has been unbefitting of the DCTU’s membership. In an article on OregonLive.com, Wheaton seemed to blame the loss on the Laborers, and then stated that contract rejections are just part and parcel of negotiations. But he gave no reason as to why DCTU members rejected the contract. When queried about where the bargaining team would go from here, he stated, “At some point we have to do something. We have to reach an agreement.”

DCTU members would do well to notice that this attitude sounds markedly similar to what was seen in the Boeing Machinists’ struggle. Those Machinists at first rejected a concessionary contract–just as DCTU’s members did Monday. Instead of going back and working for a stronger contract, the International President of the Machinists, Tom Buffenbarger, shoved another vote on the same contract down their throats. Now those Machinists are trying to unseat Buffenbarger in upcoming elections.

While it is true that at some point an agreement needs to be reached, that does not mean the agreement must be on the City’s terms. If that is the attitude of the DCTU’s leadership, then the DCTU’s members need new leaders because there is no point in having leaders who agree to such appalling contracts and then seem lost as to where to go when the contract is rejected. The DCTU’s leaders work for their members, not the City.

Second, the DCTU needs to reach out. At a forum a few weeks ago about possible upcoming strikes in Portland, people involved with various struggles around the city–the Portland teachers, the Portland State University professors, the school bus drivers, the students in Portland’s schools, and members of the DCTU–talked about the need for solidarity. The DCTU has done a poor job in establishing that outside of its member unions.

And they should reach out beyond their unions because they are on the right side of issues that people care about. People want the livable communities that come with living wages that union jobs provide. People want to know that competent professionals who are familiar with the city’s infrastructure can be out on a moment’s notice to fix problems. People want to get their money’s worth from their tax dollars. People want the workers who provide some of Portland’s most integral services to be protected. And as Portland’s parking meter scandal showed, people do not want corrupt politicians doling out contracts to private corporations and then receiving kickbacks for the favor.

This is a perfect time for the DCTU to get moving. The Portland teachers are going on strike on February 20th, and the school bus drivers may soon follow. Both will have the Portland Student Union at their backs. Those groups–and the parents of students–make up a sizable chunk of the community. If the DCTU was to gain their support, showing its support for these struggles, the City would have little choice but to offer a good contract, one that the DCTU’s members want and deserve, as well as one that protects and respects Portland’s citizens by efficiently providing them with the important services the DCTU’s members provide.

Perhaps the DCTU’s leadership can get their heads wrapped around that. 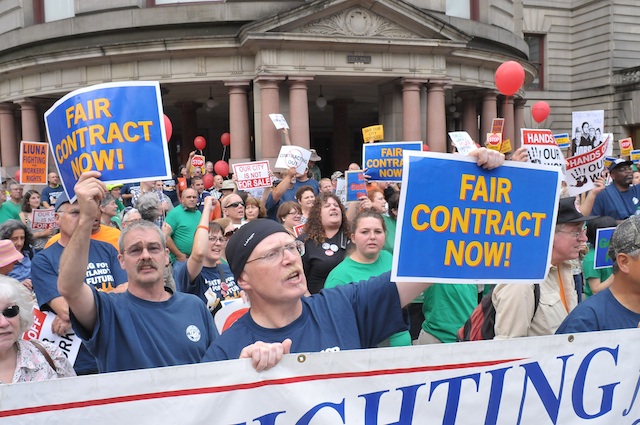